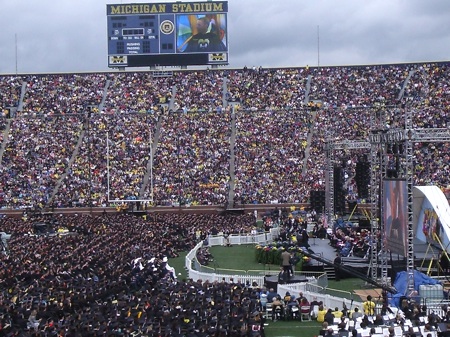 Barack Obama addressed 90,000 people Saturday at the Big House, the University of Michigan’s football stadium, where he was greeted warmly by the largest crowd to hear the president since the inauguration. Among the nearly 10,000 graduates was my daughter Kayla.

The university is a place of innovation, stability, and optimism in a state that has endured more negative consequences of the recession, and the underlying transitional factors that caused it, than any other. The evidence list is long and familiar. Detroit is losing 10,000 residents a year, and is home to less than half as many residents as it had in the 1950s. The state is just one of two — Rhode Island is the other — that is losing population. Joblessness is high. Incomes are low. Most of Saturday’s graduates will begin their careers outside Michigan, where we’ve been sending our best   since 1990. For two decades in a row, Michigan has been a national leader in exporting its brightest young minds. 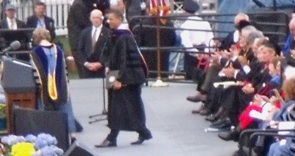 Michigan voted for Obama because he represented hope and because his calm, self-effacing, and candid style is appreciated even though the state is fueled by division. Blacks from whites. Urban from suburban. North from south. Detroit from Grand Rapids. Conservatives from liberals. Front office from shop floor. Michigan from Michigan State. Perhaps that’s why Obama, who’s confronting upheaval and resistance at every turn — war, the economy, jobs, political opposition in both parties, climate change, energy, and an expanding environmental disaster in the Gulf — chose Michigan as the place to address how Americans behave in the public arena. His speech, he said, was prompted by a kindergarten student who sent him a letter that asked, “Are people being nice?”

The obvious answer is no. They’re not. In the public arena people behave poorly, rudely, aggressively, with insolence and anger. “Part of what civility requires is that we recall the simple lesson most of us learned from our parents: Treat others as you would like to be treated, with courtesy and respect,” said Obama.

Of course, there is more to it than that. Obama described a democracy that has tilted dangerously because  bad behavior draws the attention of both parties, the news media, policy makers, and seems to encapsulate the boiling energy of the era of transition that has enthused some and worried most.

Very clearly, Obama is dismayed by the ferocity of the public exchange. How do you know? Easy. He’s complaining about the media, a sure sign of presidential frustration. “Today’s 24/7 echo-chamber amplifies the most inflammatory soundbites louder and faster than ever before,” he said. He added: “If we choose only to expose ourselves to opinions and viewpoints that are in line with our own, studies suggest that we become more polarized, more set in our ways. That will only reinforce and even deepen the political divides in this country.”

“We need a vibrant and thriving news business that is separate from opinion makers and talking heads. That’s why we need an educated citizenry that values hard evidence and not just assertion. As Senator Daniel Patrick Moynihan famously once said, “Everybody is entitled to his own opinion, but not his own facts.”

But the problem of incivility in the public arena, which has existed for all of the nation’s history, is critical now because of the speed of market and environmental changes, and the inability of decision makers to agree on responses. “When our government is spoken of as some menacing, threatening foreign entity, it ignores the fact that in our democracy, government is us,” said the president. “We, the people. We, the people, hold in our hands the power to choose our leaders and change our laws, and shape our own destiny.”

The point resonates with me. I just spent three months working with a utility in northern Michigan that wants to do a good thing –– generate 30 percent of its power with local renewable resources by 2020. Despite that goal, the utility was charged by some members of the community, and the major daily and weekly newspapers, with the equivalent of environmental genocide. A 10 mw combined heat and power wood biomass generating station would lead to forest “slaughter,” “toxic” ash, and all manner of “cancer causing” pollutants. None of these is true.

As a member of the team that designed and executed a communications and public engagement process to accomplish the utility’s goal I personally was described by such lovely phrases as poseur,  sinner, liar, shill, hypocrite and a few more choice words too. And that was from environmentalists I’ve worked with for years.

“The problem with it,” said the president, “is not the hurt feelings or the bruised egos of the public officials who are criticized. Remember, they signed up for it. Michelle always reminds me of that. The problem is that this kind of vilification and over-the-top rhetoric closes the door to the possibility of compromise. It undermines democratic deliberation. It prevents learning –- since, after all, why should we listen to a “fascist,” or a “socialist,” or a “right-wing nut,” or a left-wing nut”?

“It makes it nearly impossible for people who have legitimate but bridgeable differences to sit down at the same table and hash things out. It robs us of a rational and serious debate, the one we need to have about the very real and very big challenges facing this nation. It coarsens our culture, and at its worst, it can send signals to the most extreme elements of our society that perhaps violence is a justifiable response.”

One thought on “Go Blue! “Be Nice” While You “Shape Destiny,” Obama Counsels at University of Michigan Commencement”