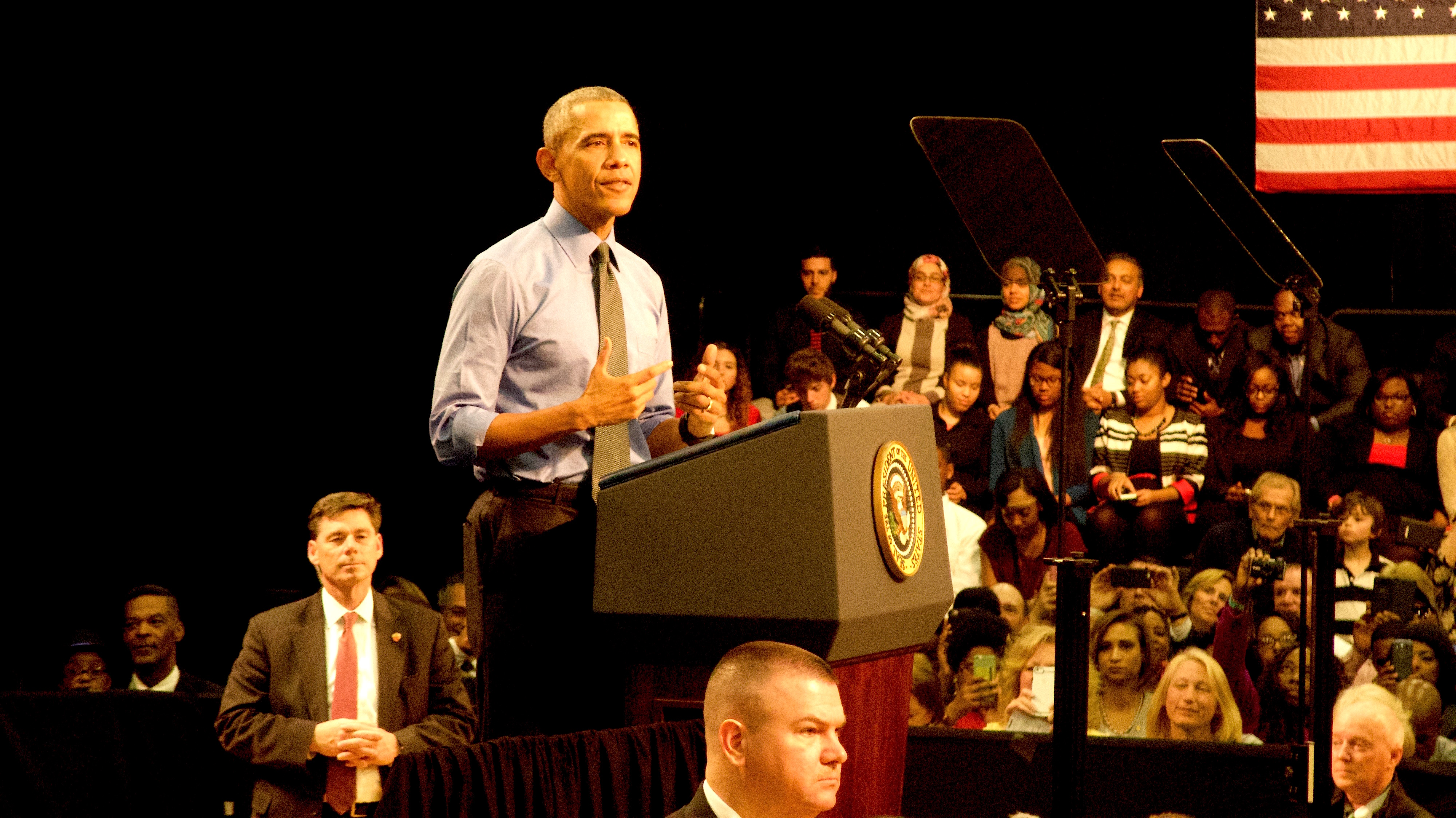 FLINT, MI —FLINT, MI – Before Barack Obama spent the afternoon in this tormented post-industrial Michigan city last week, the last president that visited Flint was Gerald Ford. That was 1974, just a few months after Richard Nixon resigned the presidency.

Flint in the 1970s provided the vital equipment, and perfectly reflected the auto-oriented, resource-abundant, mobile American way of life nearly half a century ago. General Motors employed 80,000 people in its Flint car and truck production plants, and the city was home to 190,000 residents. The city displayed what happens when manufacturing skill and labor strength delivered the highest industrial wages in the world, and handsome tree-lined neighborhoods.

On a characteristically chilly and rainy early spring Michigan day, President Obama dropped into an apprehensive city that is less than half the size it was in 1970, and a victim of state government mismanagement that contaminated its drinking water with lead.

The poisons in the city’s water supply are a manmade catastrophe, exposing children to unsafe levels of lead, frightening parents, and damaging Flint’s redevelopment. Flint’s local health crisis also is having national consequences. It is another in a growing number of water-related emergencies in the United States – along with deep droughts in Texas and California, poisoned algae in Lake Erie, depleted groundwater in the Great Plains, and killing floods in the Southeast – that are elevating to public attention grave weaknesses in the nation’s water management programs. More than any of the other water-related events, Flint’s poisoned water has crystalized the need for lawmakers to actively support the $1 trillion in infrastructure projects over the next generation to fix it.

Two Goals For Visit
The president had two missions during his Wednesday meetings here. The first was to listen to residents and assure them that he is personally leading the government project to replace lead water lines and make Flint’s drinking water safe again. Obama said he rode in the presidential limousine with Flint’s Democratic Mayor Karen Weaver, and Republican Governor Rick Snyder, to assure that he and they were collaborating on the project.

Gov. Snyder, whose decisions and aides are blamed by investigators for the city’s water contamination, later delivered brief remarks in a crowded Northwestern High School gym. The 1,000 residents gathered there greeted Snyder with loud and sustained booing.

President Obama’s second goal, emphatically explored in unprepared remarks, was to focus on the crippling consequences of careless government decision-making to the nation’s water supply, water quality, and economy.

I’ve been present previously at two inaugurals and a University of Michigan graduation commencement to hear President Obama speak. I’ve reported extensively on policies and initiatives that the president described on television. This was the first time I’ve seen and heard President Obama depart from his prepared remarks and speak at length about a serious subject. His speaking skills and his message were greeted here with authentic appreciation and a deep measure of respect.

“Flint is just a tip of the iceberg in terms of us reinvesting in our communities,” said President Obama. “We’ve seen bridges fall and levies break. So we’ve got to break that mindset. These things aren’t a coincidence. They’re the same mindset that left Flint’s water unsafe to drink. And it’s self-destructive when we don’t invest in our communities.

“You’re not going to start a business or be able to recruit outstanding staff if there’s no safe drinking water in the city.”

Rising White House Attention to Water
Barack Obama scarcely mentioned water quality or water supply in his two presidential campaigns. Among American presidents, he is neither a top promoter of the nation’s waters the way Teddy Roosevelt was in the early 20th century — Roosevelt founded the Bureau of Reclamation to supply irrigation — nor a water quality defender like Gerald Ford, who signed the Safe Drinking Water Act.

Yet during his second term, as risks to water steadily elevated to top national priorities, President Obama responded with executive-level policies and programs that evaded Congressional Republicans, who almost unanimously opposed the president’s public investment goals, including water-related programs.

Over the last two years President Obama has established new regulations under the Clean Air Act to curtail carbon emissions from power plants to curb the effects of climate change. The most significant influence of climate change is changes in snowfall and rain, resulting in more and deeper droughts and deadlier floods. The president also promulgated new rules to expand the Clean Water Act to reduce degradation of small streams and wetlands. He established a Drought Task Force to respond to water scarcity west of the Mississippi River, toured and promised help for the water-deprived Central Valley in California, convened several roundtables on the nation’s water, and convened a White House Water Summit in March.

The president’s message is clear. At the White House, like millions of other American houses, water no longer is taken for granted. The president, though, has begun to express exasperation with the political conflict in and outside Washington that, he says, constrains his ability to do more. He talked at some length on Wednesday about the danger he sees in his opposition’s governing strategy, and the results that it fostered in Flint.

Flint Is Victim
“This should not have happened in the first place,” the president said of Flint’s poisoned water. “Even though the scope of the response looks sort of like the efforts we’re used to seeing after a natural disaster, that’s not what this was. This was a manmade disaster. This was avoidable. This was preventable.

“Part of what contributed to this crisis was a broader mindset, a bigger attitude, a corrosive attitude that exists in our politics and exists in too many levels of our government.

“It’s a mindset that believes that less government is the highest good no matter what. It’s a mindset that says environmental rules designed to keep your water clean or your air clean are optional, or not that important, or unnecessarily burden businesses or taxpayers.

“It’s an ideology that undervalues the common good, says we’re all on our own and what’s in it for me, and how do I do well, but I’m not going to invest in what we need as a community. And, as a consequence, you end up seeing an underinvestment in the things that we all share that make us safe, that make us whole, that give us the ability to pursue our own individual dreams. So we underinvest in pipes underground. We underinvest in bridges that we drive on, and the roads that connect us, and the schools that move us forward.

“This is part of the attitude, this is part of the mindset: We especially underinvest when the communities that are put at risk are poor, or don’t have a lot of political clout, and so are not as often heard in the corridors of power.

“That attitude is as corrosive to our democracy as the stuff that resulted in lead in your water. Because what happens is it leads to systematic neglect. It leads to carelessness and callousness. It leads to a lot of hidden disasters that you don’t always read about and aren’t as flashy, but that over time diminish the life of a community.”

“You hear a lot about government overreach. Listen, it’s not government overreach to say that our government is responsible for making sure you can wash your hands in your own sink, or shower in your own home, or cook for your family. These are the most basic services. There is no more basic element sustaining human life than water. It’s not too much to expect for all Americans that their water is going to be safe.”

On Clean Energy and Climate, China and U.S. Move in Different Directions