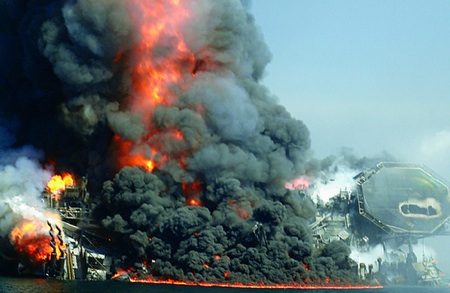 A week that began with a political blow – the disruption of the bipartisan Senate team drawing up climate and energy legislation – ended in environmental disaster. A vicious oil spill, produced by the explosion and sinking last week of the Deep Horizon drilling rig, inundated the Gulf shoreline and threatened to wreck the aquatic diversity that makes the Louisiana coast one of the world’s most productive fisheries.

Twenty one years ago, as a reporter for the New York Times, I spent weeks in Alaska covering the Exxon Valdez oil spill, and years afterward reporting on its lingering ecological and economic damage. The Gulf spill is fortified by 5,000 barrels of leaking oil a day (at least that’s what was said on Friday though others say the amount is much greater)  and there is no end in sight. Despite its assurances in public testimony and television commercials, oil companies have no proven techniques to penetrate the ink-black waters and plug the source a mile beneath the surface. The gulf spill could become the most significant oil-related disaster in the nation’s history.

In every way conceivable the Gulf spill is a dismal display of the runaway risks for a nation devoted to petroleum. Oil spills, like blood that gushes from a severed artery, attract public attention and civic lament. But what most of America really cares about is that the national blood pressure gauge – the price of gasoline – doesn’t soar.

That’s why two years ago the chant of “drill baby drill” looked for a time to be enough of an energy policy to catapult John McCain to the White House. Just a month ago President Barack Obama, arguing that it was needed to secure domestic energy needs, lifted the federal moratorium on offshore drilling and opened huge expanses of the Atlantic and Gulf coasts to new exploration.

Yesterday, the administration put that decision in abeyance pending federal inspections of existing offshore Gulf rigs and a clearer understanding of how the spill affects public attitudes and policy. And Sunday, the president is scheduled to fly to Louisiana to view the expanding mess for himself.

Indeed, during a week that the EPA made public a new assessment of the sweeping effects of a warming atmosphere in the United States, and the nation’s first offshore wind farm received federal approval, the unanswered question is how much of an impression the Gulf spill will have on anything other than the wild creatures in its path.

The spill, dark and menacing and slow moving, is an apt metaphor for the pace and condition of America’s promised transition from fossil fuel to clean energy alternatives. Andrea Buffa, a writer at the Apollo Alliance, reported this week that some businesses are saying publicly that without federal climate and clean energy policies, more clean energy operations will move abroad to countries that are committed to clean energy. In an interview in the Houston Chronicle on Wednesday, Jeff Immelt, the chief executive of General Electric, said that if the United States doesn’t adopt clean energy policies, GE will have to go overseas. “We have to go where the action is,” he said.

By any measure of economic and environmental reason the spill should resonate with the public and with lawmakers. It should convince Senator Lindsey Graham to rejoin Senators John Kerry and Joe Lieberman in introducing a climate and energy bill fit for the 21st century. In an era of warming temperatures and stone cold inflexible politics, it may be the best outcome from such a miserable week.