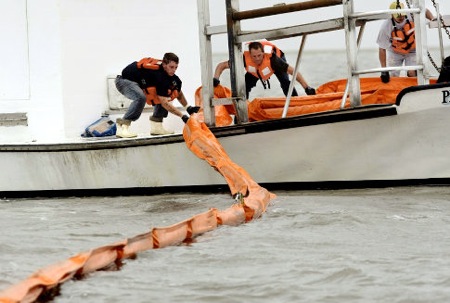 Paul Krugman, the Nobel Laureate economist,  Pulitzer Prize winning columnist for The New York Times, and friend of most things green wrote a piece over the weekend that should give environmentalists heartache. In a column about the big Gulf oil spill, Krugman described how the environmental movement has been steadily losing political momentum because it’s been so successful in scrubbing the skies and clearing the waters of the visible hazards of pollution. He also lays the blame for the movement’s diminishing influence on the persistent attacks of the right who constructed “a narrative in which advocates of strong environmental protection were either extremists — “eco-Nazis,” according to Rush Limbaugh — or effete liberal snobs trying to impose their aesthetic preferences on ordinary Americans.”

Krugman then adds this: “I’m sorry to say that the long effort to block construction of a wind farm off Cape Cod — which may finally be over thanks to the Obama administration — played right into that caricature.” Ouch!

For any reasoned environmental advocate, myself included, that is a warning sign of the damage to the movement’s credibility that is gradually unfolding as a result of the schism between national environmental leaders — strong advocates for clean energy investment and projects — and grassroots environmental organizations working so hard in more than 30 states to halt the projects in their communities.

The juxtaposition of an expanding environmental disaster in the Gulf — an event that unites all of environmentalism — with the grassroots push back on the available alternatives to fossil fuel has proven irresistible to some writers and prompted pleas of sanity from clean energy advocates and prominent environmentalists.

In a letter to the editor last week responding to a town councilor’s criticism regarding Cape Wind’s decision to purchase turbines from the German manufacturer Siemens, Barbara Hill, the executive director of Clean Power Now made this statement.

“Back in 2003, GE had a 3.6-megawatt turbine it was ready to begin manufacturing in the U.S.; but the resistance in Massachusetts from the well-funded and politically connected opposition at that time, including the late Sen. Kennedy, Gov. Romney and the Barnstable Town Council, led it to move to a place that was wind friendly: China. The only offshore wind turbine manufacturers are overseas, because that is where the market is — as well as the national policies and subsidies to advance the industry and the associated jobs. And it doesn’t take nine years to get an offshore wind project fully permitted. Had opponents focused on a larger vision instead of their myopic view we would be the benefactors of all those jobs and economic opportunities.”

Bill McKibben, the author and environmentalist, also pleaded last year with local green organizers to consider the outcomes of their protest, which is to raise concentrations of carbon dioxide in the atmosphere steadily beyond the safe threshold of 350 ppm. “We are already well beyond 350 and accelerating rapidly in the wrong direction,” he wrote. “So when local efforts to delay or stop low-carbon energy projects come into conflict with the imperative to act urgently on global warming, they have to take second place. Because even if we win every other battle, if we lose 350, it won’t make any difference at all. You can “keep” every river and bay and lake and mountain and wilderness, but if the temperature goes up 3 degrees globally, it won’t matter. The fish that live there won’t be able to survive, the trees that anchor the landscape will die, the coral reefs will bleach and crumble. Whatever the particular part of the world that we’re each working on, it’s still a part of the world. Global warming is the whole thing.”

And Canadian environmentalist David Suzuki echoed that concern in an article last year. “I’m worried about the escalation of rhetoric on both sides,” said Suzuki. “Yes, it is urgent that we find ways to tackle the problems caused by fossil-fuel use and excessive energy consumption. And it is true that some opponents of technologies such as wind power are motivated more by NIMBY self-interest than science or true environmental concerns.”