Thomas Jefferson once said, “The Ohio is the most beautiful river on earth. Its current gentle, waters clear, and bosom smooth and unbroken by rocks and rapids, a single instance only excepted.”

Downriver from Louisville, Kentucky, where the 1,000-mile long Ohio River reaches its widest points, and the mirroring waters slip by miles of unbroken hardwood forests, it’s possible to witness some of the very same beauty that inspired Jefferson.

The Ohio is much in my mind of late. A year ago I spent time in Wellsville, Ohio, south of Pittsburgh, where a West Coast developer proposed a multi-billion dollar industrial plant to convert coal to liquid fuels. Last summer, I spent weeks in Owensboro, Kentucky to report on the mid-sized river city’s authentic work to understand and react surprisingly well to the new market trends of the 21st century. I visited Louisville, one of the largest Ohio River cities, where Mayor Greg Fisher is leading a downtown reconstruction program, and the city just joined with Bruce Katz and the Brookings Institution’s peerless metropolitan research and planning group to foster a new economic strategy for the city and the region. 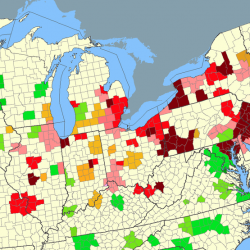 Last month I was in Sardis, Ohio and New Martinsville, West Virginia to report on the massing industrialization by the energy industry to drill the drill the deep shales on the Ohio side of the river for oil and gas. The Pennsylvania side has been a heavy drilling zone for four years, which is one of the reasons that the February unemployment rate in the Pittsburgh metropolitan region was 6.7 percent. That’s nearly two percentage points below the national average.

Cincinnati is redeveloping its historic Over-the-Rhine neighborhood, fostering the development of state of the art marketing and communications enterprises, and is building a streetcar line.

What a change in direction. For two decades at the end of the 20th century, the cities and states of the upper Ohio River were the pitted and marked buckle of the nation’s rust belt. The map at right illustrates the obsolescence and job loss that separated Cleveland, Pittsburgh, Wheeling and the smaller cities along the upper Ohio from the rest of the nation. Downstream, Cincinnati and Louisville also slipped into a generation or more of disinvestment and downtown decay.

That is no longer the case in Pittsburgh, now a showcase of research and innovation; Louisville, with its beautiful historic neighborhoods and great downtown university that make it one of the sweetest places to live in the country, or Cincinnati, a laboratory of social innovation. Further downriver, the soaring commodity markets for farm products are elevating the moods of Indiana and Illinois river cities. Even the wrecked river towns of Ohio and West Virginia, where steel and chemical plants fell victim to globalization, are finding themselves engulfed by an energy boom that is bringing $billions in new investment in energy processing, production, and transport infrastructure.

The Ohio River has few equals as a metaphor for the nation’s condition or spirit. During days of settlement it was the water highway, used by millions of Americans, to migrate into the Midwest and West. During slavery, it was the last physical barrier that brave men and women crossed to freedom. In the mid-20th century, it generated the energy, made the steel, built the cars, and supported the metropolitan regions that supported America’s drive-through economy of suburban convenience. Its cleanup in the 1980s and 1990s heralded the new era of environmental economics, especially those factors associated with metropolitan redevelopment. And its industrial decay was a foreshadowing of the immense transition and costs of keeping pace with the rest of the world, particularly Asia.

History, as viewed by most Americans, is one or two straight story lines in which a central character working with a select group of leaders makes the right choices and everything is closed so neatly. In reality, history is more like a slow-moving weather system in which people and institutions are often blown about like leaves in a storm. The revival of the Ohio River Valley today tells us something important about the people and river communities finding new paths to well-being, and about the country. Perhaps we are doing more as a nation than we give ourselves credit for, and certainly that appears to be the case in this pummeled American river valley, to understand the influence of  events and the need to establish a more dynamic foundation for making and acting on big ideas.

On Beautiful Fall Day Central Lake Is Shuttered For Business