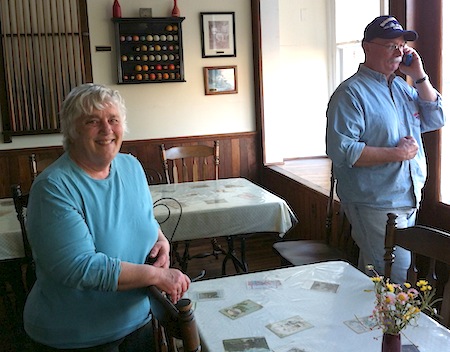 SARDIS, Ohio — Frank Ellis, who is a 51-year-old electrician from this Ohio River Valley town, spent much of his time since high school working upriver at the PPG plant in Natrium, West Virginia. He owns 140 acres and the rights to the oil and gas below them.

Denny Cowley (in pix below) is a 55-year-old sheet metal worker who was raised on a dairy farm near Canton, Ohio, and 16 years ago bought a 47-acre place just outside Sardis, with its mineral rights intact, where he settled into a life of hard work, hunting, and friends. He drives a Ford F-350 pickup, with a big diesel that whines as he shifts gears on the steep and narrow roads that climb to hill summits on both sides of the river that are becoming staging areas for oil and gas drilling and production.

The great American energy boom that is rewriting the narrative on oil and gas production in the United States, raising growing levels of civic angst about safety, and helping to push the country out of the Great Recession, is arriving in force along the Ohio River. Upriver on the Ohio side, in Columbiana, Carroll, Jefferson, and Mahoning counties, drilling has already started and big mineral leasing checks arrived last year, lots of them with six and seven figures. 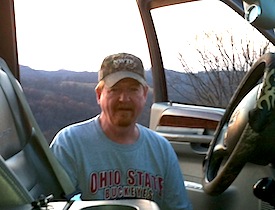 Ellis (with Sharon Davis in pix above) and Cowley have spent the last six months helping to organize mineral owners around Sardis into an 8,000-acre block of mineral rights, more than enough to negotiate a lucrative lease that is, they say, “fair to everyone.” The two men have been spending a good bit of time meeting at Marv’s Place, the welcoming American cuisine cafe near the center of this town of 2,000 that was established over a decade ago by Sharon Davis. The cafe, with a long hardwood counter and big storefront display windows, is in the same two-story, 118-year-old brick building her grandfather once owned. Davis and her family own 168 acres of mineral rights.

Except for the prayers directed at lottery tickets, and the musings about accumulated wealth that occasionally cross the minds of hard working people unaccustomed to having money, neither Ellis, Cowley, nor Davis seriously considered the chance that their savings accounts would one day be filled to the brim. Then came Saturday, when the three joined some 200 other mineral-owning men and women at the Sardis Elementary School. The occasion: signing an oil and gas production lease with Eclipse Resources that instantly made the lessees financially comfortable, and could — if energy production soars — turn most into eventual millionaires.

“People stuck together and we got a good deal,” said Ellis.

Eclipse agreed to pay $4,250 for each acre of minerals leased for the first three years of the agreement. If Eclipse or its successors do not start a well in that time, mineral owners gain $1,000 more per leased acre. Other financial returns include a 20 percent royalty on gas and oil production, and a 20 percent royalty on production of liquid gas condensates like propane and ethane. By one estimate, made by a petroleum engineer who joined the negotiating unit and owns several hundred acres of minerals, the agreement will help ensure that every leased acre will generate $25,000 to $30,000 over the life of hydrocarbon production in the region, which could last 30 years.

“We wanted to bring something good here,” said Cowley. “The more we could get together, and stick together, and pull our acreage together, the more power we had to negotiate. We wanted something that was good for everybody.”

In an era riven by civic discord, the Sardis lease represents a rare feat of community cooperation achieved despite the competing emotions of greed, envy, and uncertainty. The latter three, of course, are generally exploited by gas and oil companies that swoop into energy-rich communities to take advantage of mineral owners who know nothing. I saw it happen here in my home region of Benzie and Manistee counties in northern Michigan, the western edge of the Antrim shale natural gas boom of the 1990s. Mineral rights owners signed five and ten-year leases for $10 an acre and 1/6th royalties that gave the energy companies pretty much the right to do whatever they wanted.

The Sardis mineral owners weren’t as naive. They turned for expert guidance to Jennifer Garrison, a lawyer from Marietta, Matthew Warnock, a lawyer from Columbus, and Bob Chase, a professor of petroleum engineering at Marietta College. The model lease that was signed on Saturday includes protections for the region’s water, safeguards to the land, and substantial returns for valley residents fortunate enough to own their minerals. The lease includes a provision that requires Eclipse to pay 80 percent of the increase in property taxes that could materialize as oil money draws new residents and land values rise. And the lease requires Eclipse to pay the 4.5 percent fee charged by the lawyers and Professor Chase.

Cowley smiles when he explains that provision. “This is going to help a lot of people here,” he said. “I can do improvements on my property. I can do some nice things for my family. It’s a good feeling to bring something that’s good for this community.”

The last point can hardly be overstated. For two generations, few places so darkly illustrated the erosion in American industrial vitality, and the heart sore circumstances of its people, than the upper Ohio River Valley. The 145 miles of river from Pittsburgh to Marietta, strikingly beautiful as it flowed past rounded hills, also drained a landscape of shuttered plants, broken towns, and lives bent by lost jobs and frantic worry. Sociologists and historians episodically descended on one river town or another to study the choices people made to stay, or to go. Journalists also came, treating the valley as a prime specimen in the nation’s laboratory of ruin. In the early 1990s, conditions had become so grave that residents and workers in East Liverpool, upriver from here, campaigned to build just about the only new industrial facility still interested in the upper Ohio — a big toxic waste incinerator constructed near an elementary school.

Last week, for the second time in a year, I spent some time in the upper Ohio River valley and found a much different mood. People were nervous, but not because another plant had announced a closing. They wondered how the new oil and gas wealth would change their lives and speed up towns accustomed to having no pace other than the passing of old people to the grave and young people moving out.

“Things will change now,” said Sharon Davis. “We know that. It could be fantastic for this community. It could also affect one of the really good things about this place. Our quaintness. Nobody likes change too much.” 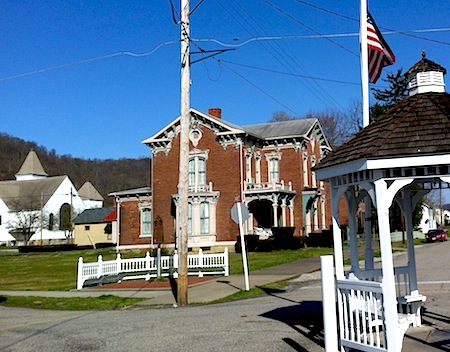 3 thoughts on “Along A River of Descent, New Riches in Ohio”