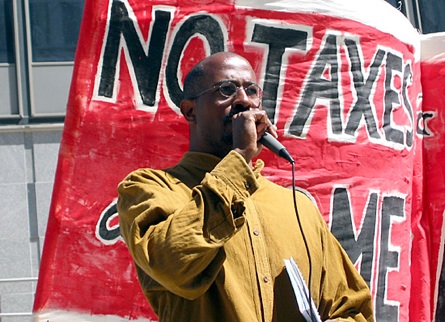 PITTSBURGH — On the day after he buried his father, Van Jones, arguably the most thoughtful and dynamic young leader in the American environmental movement, addressed the Good Jobs, Green Jobs conference this morning. Jones, who bore his grief in occasional tears, told the more than 600 people in the room that this gathering was such a seminal event in the construction of a new green/labor/business governing coalition in the United States that his father wanted him to be here.

“My father got out of poverty,” Jones continued. “He could have bought a big house and could have left the community. He raised us right there.”

Jones stopped at this point. The room hushed. With a tissue, he dabbed at the tears on his cheeks. He bowed his head for a moment and then looked straight ahead. “We need to have principles,” he said. “What we need is to minimize the pain and maximize the gain for the little people, the ones too easy to leave behind.”

Aside from the riveting emotional content of the moment, there are a couple of big points worth noting about Jones’ appearance, and especially the steady evolution of a national political leader capable of tieing together the four essential social and economic movements — environmentalists, civil rights activitist, labor, and progressive businesses — that now have the opportunity to take back America. And it’s no accident that Jones, whose work until the couple of years was distinguished by defending citizens against the police in Oakland, has become a bona fide star.

The environmental movement, with all of its lily white warts and scientific hyping of minimal risks and upper crust chic, has nevertheless been the most important and durable movement on the left during the entire attack on America by what Jones calls “the pollution-based economy,” and “a government on the side of the problem makers.” By tying his work to the green movement, he broadened his base, linked to the considerable wealth on the green left, and found allies in the media and in Democratic politics. In 2007 he emerged in a column by New York Times columnist Tom Friedman, shared a stage in New York with President Bill Clinton at the Clinton Global Initiative, and worked with California Senator Barbara Boxer to hone the legislation, affixed to last year’s federal Energy Bill, that will train over 30,000 low income people in green collar jobs.

It also helps that Jones, who’s not yet 40, the grandson of a southern black minister, and a Yale Law School graduate, knows a little about cadence, metaphor, story-telling and theater. The man knows how to talk.

Today his message was this: “There is nothing standing between us and the green economy but our own cynicism, our lack of trust in each other, fear of success, and our being used to being small,” he said. “We have the obligation to be right and in the majority.”

Jones noted that during the Depression farmers, students, working people, and intellectuals built a permanent governing New Deal coalition that defeated Fascism, built prosperity, and created the middle class. He stressed the need to think about the opportunity that lies before the nation to build an economy that helps working people and the environment, that “lifts the nation and everybody in it.”

“This is not a problem we solve that is built on marginal fixes,” said Jones. “We have an economy based on hurting poor people and hurting the planet. We’re talking about an economy about helping poor people and helping the planet. In order to get that change out of the system we need a movement, we need a coalition that can last over time, that can govern for decades. The government is on the side of the problem makers in this economy. It’s time to build a government on the side of the problem solvers in this economy. It’s time to build an economy that leaves nobody behind.”

Obama’s Pivot on Gulf Disaster to Commander in Chief

2 thoughts on “Van Jones; An Economy For Problem Solvers”