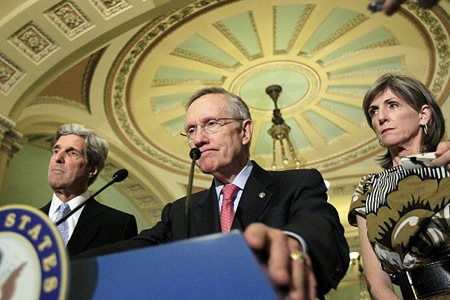 Until December 2009, the idea of acting to cool the Earth was on a roll. High points included 2007 Nobel Prizes for the UN Intergovernmental Panel on Climate Change’s breakthrough science and for Al Gore’s astonishing work to elevate global warming to an international priority, They also included Barack Obama’s winning 2008 presidential election, and the formation of global online grassroots activism led by  350.org and TckTckTck, a project of the Global Campaign For Climate Action.

But that month more than 100 heads of state gathered at the UN climate summit in Copenhagen and failed to reach agreement on binding international measures to limit carbon emissions and secure the planet’s safety. Nowhere has the fallout from Copenhagen’s grim result been more visible than in the U.S. Senate.

Today, Senate Majority Leader Harry Reid (in pix above with Sen. Kerry on left, and Carol Browner) emerged from a meeting with Democratic colleagues and announced that the new comprehensive climate and energy bill he promised last week would not include specific measures to limit emissions that are warming the Earth.

A much less ambitious bill will be introduced next week, said Sen. Reid, that focuses on a response to the BP Gulf disaster, improvements to energy efficiency, converting vehicle fleets to natural gas, and other narrower energy measures.

The introduction of such a bill would appear to have the effect of squandering the work of the House, which passed a cap-and-trade bill in June 2009 that set a national cap on carbon emissions and required companies to have permits for such emissions. It also would appear, if political polls are accurately forecasting severe Democratic losses in the fall, to kill any chance of capping carbon emissions in this Congress, the next, or even over the next decade.

For the foreseeable future climate action in the U.S. will be ad-hoc, piecemeal, uncoordinated, and not nearly as effective as it could be with a comprehensive legislative approach. If warming temperatures, failing industries, economic malaise, and energy insecurity is your idea of a good time, then this era of American inaction is just what the doctor ordered.

Weeks Of Work By Climate Activists
It’s not that people aren’t trying. The Senate decision to focus the new bill solely on energy came after weeks of intensive work by climate advocates to build a case for emissions limits in and outside Washington, organizing demonstrations at the grassroots, meeting with Senate staff, and raising the issue in the media. Since May, following the explosion and oil blowout in the Gulf, President Barack Obama also had campaigned for climate action in meetings with Senators of both parties, in public appearances outside Washington, and in a televised Oval Office address in June during which he called for a new “national mission” to achieve energy independence and safeguard the environment.

The effort, though, was impeded by opposition messages that asserted, with scant basis in fact, that limiting carbon emissions would severely raise energy prices and living costs, and by the prevailing politics of stasis on climate issues that define the era. Lawmakers in Australia, Japan, and Canada are having similar difficulties getting strong climate bills approved. The Copenhagen summit was a study in how pride and posturing trumped economic and ecological urgency.

“Many of us want to do a thorough comprehensive bill that creates jobs, breaks our addiction to foreign oil, and curbs pollution,” said Sen. Reid at a hastily called news conference today.  “Unfortunately at this time we don’t have a single Republican to work with in achieving this goal. For me it’s terribly disappointing and it’s also very dangerous.”

In The Face Of Record Heat, No Action
Indeed, Sen. Reid’s announcement came the same week that the National Oceanic and Atmospheric Administration reported that 2010 is the hottest year on record, and on the same day that China said it would enact domestic carbon trading programs starting next year to help meet its target of reducing the nation’s carbon pollution.

“It should be a wake-up call that the same day Republican opposition kills a carbon price in the Senate, China announces it will put a price on carbon in 2011,” Joshua Freed, the director of clean energy program at the Third Way, a centrist think tank, told the Washington Post.

Appearing at the news conference with Sen. Reid was Sen. John Kerry, the Massachusetts Democrat who is widely regarded as the Senate’s most important advocate for reducing carbon emissions. Sen. Kerry promised to keep trying to find an opening to introduce and pass climate legislation in the Senate. “It’s not dying. It’s not going away,” he said. “We’re going to try our best to find a way to do it in the next few weeks. If we can’t do it in the next weeks, we’ll do something that begins to do something responsibly in the short term. But this will stay out there, and we’ll be working on it. We’ll be asking you to talk to your senators and move them to understand why we have to get this done.”

President Obama dispatched Carol Browner, director of the White House Office of Energy and Climate Change, to join Senators Reid and Kerry in making the announcement. Her assessment of a large portion of the problem was characteristically direct and unvarnished: “”As we stand here today we don’t have one Republican vote,” she said.

Democrats Not United in Support, Republicans United Against
Still, neither Reid nor Kerry were able to marshal consistent support from Democrats either. New West Virginia Democratic Senator Carte Goodwin, who this month replaced the late Sen. Robert C. Byrd, announced even before he arrived in Washington that he would not support measures to limit carbon emissions. Other Democrats, most notably Sen. Ben Nelson of Nebraska, also periodically expressed opposition.

Advocates of climate action expressed equal measures of frustration and resolve to keep trying today. “It’s deeply disappointing that Big Oil, Dirty Coal and their allies in Congress continue to stand in the way of creating a clean energy economy that creates jobs, makes America more energy independent and protects the planet,” said Gene Karpinski, the president of the League of Conservation Voters. “The twin challenges of building a clean energy economy and addressing global warming are too important to fail.  The fight to create new clean energy jobs and solve the climate crisis will continue — in this Congress, in the states and at the EPA.”

“Due to Republican leaders inaction,” said Daniel J. Weiss, the director of climate strategy at the Center for American Progress, “China will continue to expand its clean energy industry and jobs. We will spend $1 billion each day on foreign oil. And power plants will spew billions of tons of pollution.”

Spreading Ticks and Other Climate-Related Actions