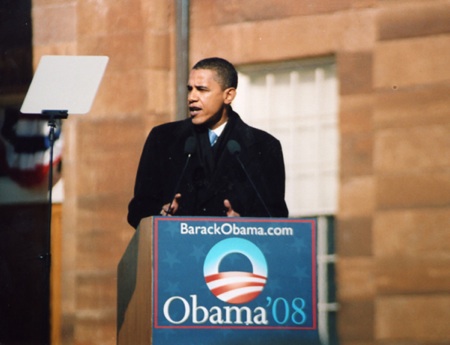 Given the emotional reserve of a man whose aides once referred to as “no drama Obama,” the president is getting pretty fired up about energy.  On Wednesday President Obama concluded an all hands cabinet meeting at the White House by publicly declaring again his resolve to develop a “new energy strategy that the American people desperately want.”

“It is time for us to move to a clean energy future,” the president said, adding that “the entire cabinet here recognizes, with all the other stuff that they’re doing, that if we get energy right, an awful lot of things can happen as a consequence.”

The unscripted outburst came eight days after the president delivered a formal Oval Office summons for a “national mission” to pursue cleaner sources of energy and new practices that limited carbon emissions.  The president’s “national mission” speech, in turn, followed five days after he alerted a bipartisan group of lawmakers and prominent business leaders that he wanted to “move much more aggressively on the energy agenda,”and three weeks after Obama told an audience in Pittsburgh that “the time has come, once and for all, for this nation to fully embrace a clean energy future.”

Not since President Jimmy Carter delivered his famous and perceptive April 1977 address, during which he asserted that solving the energy crisis was the “moral equivalent of war,” has an American leader staked so much political credibility on a new national energy policy. And as energy historians are quick to note, none of President Obama’s successors, starting with President Nixon, achieved anything close to the alternative energy goals they pursued.

Will It Work Now?
The obvious question is whether economic, environmental, and social conditions are sufficiently different today than they were in any of the last four decades, and whether the country is experiencing enough urgency to seriously reckon with how it produces and uses energy.

There are no ready responses. The president’s critics in the energy industry and the Republican party have expressed hostility to Obama’s call to action and have promised an aggressive counterattack. Some allies in the president’s party and the national media wonder if the White House and the nation have sufficient fortitude to accomplish such a significant adjustment in the country’s economic and environmental vector.

For his part, the president has vowed to “find the necessary votes” to pass a strong bill. And environmental advocates who’ve worked for decades to make the case for clean energy and climate action are pressing the Senate and White House to make sure the bill is comprehensive and includes credible measures to reduce emissions of greenhouse gases.

In a capital city devoted to process as much as to politics, the gears of legislative action are grinding to life. The summer of 2010 is shaping up to be a new season for clean energy and climate action, a season that until April 20 was not at all clear would occur at all.

BP Disaster’s Legacy?
That day, of course, the Deepwater Horizon exploded in the Gulf of Mexico, killing 11 men. The blowout turned loose over 100 million gallons of raw crude with no end in sight.

President Obama understands the spill has pitched the country toward a new reckoning with its devotion to oil.  That involves carefully evaluating the deadening costs of a marine ecosystem deluged by oil, and the recklessness of heating the atmosphere with uncontrolled carbon. It also requires coming to grips with an economy distorted by the $400 billion-a-year price for imports that threaten U.S. security, as well as the essential values of choice and mobility that fewer and fewer Americans attain.

It’s for these reasons that President Obama is embracing the moment, and he’s apparently convinced Senate Majority Leader Harry Reid to join him in what both hope will be a steady push to pass comprehensive legislation in the Senate before the August recess. A year ago, the House passed its version of an energy and climate bill that awaits a Congressional conference committee.

The Senate isn’t starting from scratch. Senator Reid and the president have asked lawmakers to choose elements of three proposals, draw up new provisions to respond to the disaster in the Gulf, and introduce a new bill in mid-July. The three existing Senate proposals:

Of late, political reporters are focusing on whether the president will take point or follow Senator Reid’s lead in shepherding a bill through the Senate, duplicating the president’s strategy during the bruising health care battle.

But that frame on an otherwise completely compelling political narrative is merely an exercise in Washington gamesmanship. In this instance, regardless of where the president situates himself, there is no mistaking where the urgency of the legislative initiative lies – in the BP Gulf disaster – and who’s driving hard to change the rules of the energy game – the president.

No Surprise, But A Big Blunder
Though the timing is almost serendipitous, nobody paying close attention to the president’s principles and values should be surprised. From the moment he announced his candidacy for president in February 2007, the president has set very clear clean energy and climate goals in order to “be the generation that finally frees America from the tyranny of oil.”

For climate and clean energy advocates, that’s an interesting statement from a president who blundered into a March 31 announcement to expand the offshore territory suitable for new oil and gas exploration, calling it safe.

The president, though, has pushed the country closer — albeit not nearly close enough — to a clean energy economy, and taken more climate action than any American leader. The 2009 American Recovery and Reinvestment Act included over $100 billion in public investment for clean energy, energy efficiency, and transit. The administration, under the authority of the Clean Air Act, has established significantly higher fuel efficiency standards for cars and light trucks, and stricter emissions standards for greenhouse gases that go into effect in 2012 and will save 1.8 billion barrels of oil and eliminate 900 million tons of carbon emissions in its first five years, according to the E.P.A.

A comprehensive climate and energy bill that includes enforceable limits on carbon emissions is the single most important legislative tool to, in the president’s words, “turn this crisis of global warming into a moment of opportunity for innovation, and job creation, and an incentive for businesses that will serve as a model for the world.” President Obama vows to get it done. Most Americans, judging from public opinion polls, understand the gravity of the moment and support where he wants to go.