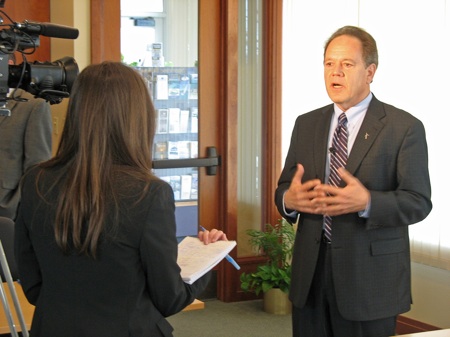 The director of the Michigan Department of Energy, Labor, and Economic Growth last week lauded Traverse City Light & Power for pursuing a renewable energy strategy that fits northwest Michigan’s reputation as a green region, and “complements all the assets and progressive trends this region represents”. Stanley “Skip” Pruss, who is one of Governor Jennifer Granholm’s closest advisors and a nationally known clean energy leader, also supported the utility’s proposal to generate a portion of its renewable energy from a state-of-the-art combined heat and power wood biomass plant, calling it “a tremendous asset.”

“If this community were to do that,” Pruss said, “if TCL&P were to do that, it would be a precedent-setting achievement that we would commend other utilities to emulate. That is real leadership.” (See a full transcript of his remarks here.)

April 7 Meeting Concludes Public Process
Pruss visit came less than a week before the last of the three public forums that TCL&P has held to invite public comment on its plan to acquire 30 percent of its energy from local renewable resources by 2020. Pruss cited the utility’s public communications and engagement process, during which TCL&P has asked its customers and citizens to help choose the appropriate renewable resource, “as absolutely commendable.” Full disclosure: I’ve spent several hours a week since January as a communications and engagement strategist to help TCL&P draw up and execute the public process.

When asked directly by a board member and a citizen whether TCL&P should heed calls from some members of the community to slow the process and delay a decision on building a state-of-the-art biomass plant, Pruss was direct: “There are choices to be made. I would be disinclined to wait a year or two before you act. I think you should be aggressive.” (See attached transcript)

Pruss is leading Michigan’s new economic strategy, which relies on developing renewable energy resources, clean vehicles, and the tools and practices to move from fossil fuels to clean energy. He said over the next 15 months or so Michigan will see nearly $14 billion in clean energy investment, most of it for new plants downstate to manufacture lithium ion battery technology to power vehicles and store energy.

Benefits and Burdens
Pruss was effusive in outlining his support for the utility’s 30BY20 plan, which he said was at the leading edge of the state’s transition. He also described what he called the “benefits and burdens” of pursuing wind, solar, and biomass, acknowledging that there were no perfect technologies.

Pruss described one concern he had about wood biomass as a fuel source for new power plants. He noted that the state is aware of proposed biomass plants in northern Michigan capable of generating almost 200 megawatts of power. The TCL&P proposed plant would generate 10 mw.

“Here is my concern with biomass,” Pruss said, “not that we don’t have the supply and not that we can’t harvest that supply and deliver it in a sustainable way. We can. The concern is that we have a lot of potential biomass fuel projects both for combustion and biofuels, more of the former than the latter. But there are new projects that pop up. If they do advance they would be competing for the same supply. We don’t know a whole lot about price sensitivity except there is price sensitivity at some point in time.”

Sustainable Forestry
Michigan State University and Michigan Tech are working with DELEG on a major study to better understand how to apply the state’s enormous forest resources – they are larger than all but four other states – to biomass generation for electricity and for biofuels. Other states, among them Massachusetts where similar concerns about forest sustainability have been raised, also are conducting intensive assessments.

“What government can do and should do, and what we are doing — we’re building the capacity with our universities,” Pruss said. “We have consultants doing this. We are spending a lot of money to say this is how much biomass we have. This is our best calculation. This is how much there is. So you can plan and know how much is out there on a sustainable basis.”

The TCL&P wood biomass proposal merits state support, said Pruss, because of the plant’s design. TCL&P proposes to build a plant that generates electricity and steam, what engineers refer to as “cogeneration,” or “combined heat and power.”

The proposed TCL&P biomass plant, which would operate as cleanly as a natural gas-fired plant, and much cleaner than a coal-fired utility, would also be twice as energy efficient as a conventional biomass plant. Its construction would generate jobs and its operation would produce permanent jobs and keep $4 million in the community each year that is currently going to Wyoming, railroads, and a coal-fired utility in Lansing.

An Example For The State
“Your plant, I’m guessing, is 70 to 80 percent efficient,” said Pruss. “That is huge. That means you’re going to be twice as energy efficient as anything out there. I think that so important. That is part of the calculus in the equation of benefits and burden. The fact that your plant is going to be so energy efficient is great. I want you to be an example for other communities around the state.”

“With respect to your plan – because it involves cogeneration which doubles the efficiency of the plant – that is hugely important,” Pruss said. “I know Governor Granholm and I would like that plant to proceed.”

Linda Johnson, chair of the Light & Power board, said after the meeting that she was pleased with Pruss’ analysis of the board’s plans. She also shrugged off criticism that Light & Power was rushing into a decision, noting that board members have been studying biomass since 2005 during a tour of energy plants in Germany, Denmark, and Sweden.

“We have not been in a rush,” she said. “We have been doing this for four years, and it’s taken us this long to establish what our needs are. To just sit back and do nothing would be irresponsible at this point.”

— Keith Schneider with Steve Kellman, who is a former reporter for the Traverse City Record-Eagle.

Responding to a Candidate on Traverse City Biomass Resistance