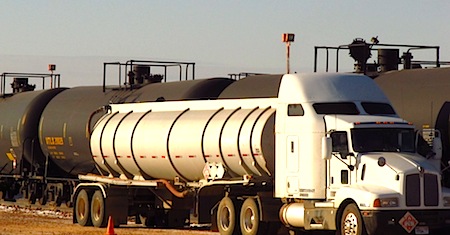 North Dakota is producing more than 600,000 barrels of oil daily, second most in the U.S. behind Texas. A tanker truck loads oil aboard a tanker train near Williston, ND. Photo by Keith Schneider

Over the weekend Tom Friedman of the New York Times wrote a good piece, Get it Right on Gas, about the short-term promise and potentially long-term economic and environmental peril prompted by the U.S. energy boom. Friedman’s article made quite a few of the same points I made in March in a ModeShift piece, New American Energy Boom: A Reprieve and a Reckoning.

Friedman: “The enormous stores of natural gas that have been locked away in shale deposits across America that we’ve now been able to tap into, thanks to breakthroughs in seismic imaging, horizontal drilling and hydraulic fracturing, or “fracking,” are enabling us to replace much dirtier coal with cleaner gas as the largest source of electricity generation in America. And natural gas may soon be powering cars, trucks and ships as well. This is helping to lower our carbon emissions faster than expected and make us more energy secure. And, if prices stay low, it may enable America to bring back manufacturing that migrated overseas.”

Schneider: “The boom in oil and gas production represents a generation-long economic reprieve for the United States. Almost every  analysis by the U.S. Department of Energy, the U.S. Geological Survey, and by the major oil and gas companies projects that the production trajectory for domestic oil and gas production will steadily increase for 20 years, maybe longer. More than $100 billion annually in capital investments is pouring each year into energy-producing states for exploration and drilling equipment, new pipeline construction, refinery expansions, and for pumps and trucks and transport depots to move fuel to market. Dense pockets of new job growth in oil and gas production, processing, and services have formed in a dozen energy-rich states, helping to lead the U.S. out of the recession.”

Friedman: “Natural gas is still a fossil fuel. The good news: It emits only half as much greenhouse gas as coal when combusted and, therefore, contributes only half as much to global warming. The better news: The recent glut has made it inexpensive to deploy. But there is a hidden, long-term, cost: A sustained gas glut could undermine new investments in wind, solar, nuclear and energy efficiency systems — which have zero emissions — and thus keep us addicted to fossil fuels for decades.”

Schneider: “The risks of perpetuating America’s fossil fuel economy are equally momentous, producing a new era of national reckoning. Ample natural gas supplies and low prices are dampening demand for wind, solar, geothermal, and other non-polluting sources of energy.  One result is that clean energy manufacturing plants are closing in the Midwest, Rocky Mountain states, and California. Two solar producers in Michigan, for instance, have shut their doors in the last year.

Public investment in non-fossil fuel innovation is uncertain. It’s not at all clear yet whether Congress will renew the tax credits that expire later this year and that have spurred wind and solar use and manufacturing.

If the U.S. spends another generation in an oil and gas coma, choosing not to pursue alternatives with the fierce commitment to success that propelled the Apollo program to land a man on the moon, it will end up even more economically stretched and politically unstable than it is today.”

See more of my reporting on the U.S. energy boom here.