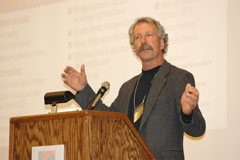 Bill Bobier, who’s a progressive Republican from Oceana County on Michigan’s west side, once represented four Lake Michigan counties in the state Legislature. At the time, in the mid-1990s, he was one of the rare good guys in a Legislature swinging so hard right that even Michigan Republicans didn’t recognize their own kind. What made Bobier especially distinctive was his farm, where he and his wife raised vegetables and beef. I once spent the day out there watching Bill fix his fences. We then sat for a few hours in his farm country kitchen talking about the agriculture economy. I remember him explain that every time the Michigan Department of Agriculture and the Department of Environmental Quality issued a new regulation to manage big growers, the first folks hurt were the small guys.

Bill brought the same message to the Seeds of Prosperity conference today. Oceana County has emerged as one of the centers of agricultural innovation in the Midwest. Apple growers over there, for instance, developed the quick fresh-freeze and packaging process that became McDonald’s popular Apple Dippers. The county’s asparagus growers figured out how to market their fresh frozen products to Wal-Mart and other food retailers.

Since leaving the Legislature, Bill spends most of his professional time in Lansing, where he has an office across the street from the Capitol, and lobbies on farmland conservation and agriculture. The small farm, one of Michigan’s important employers, is as critical to the state’s economy as any small manufacturer, he argues. Maybe more so at this point as Michigan sheds manufacturing jobs by the tens of thousands a year. Still, the Department of Labor and Economic Growth, the business recruitment agency, keeps falling over itself to recruit small manufacturers. DLEG does very little to promote agriculture or small growers.

It’s another example of 20th century thinking that needs updating. In fact, there are few small manufacturers moving to Michigan or getting started here. There are many more small farmers, though, getting into business, especially in the Consumer Supported Agriculture sector which has grown up around the state’s big cities.

Everybody eats, Bobier argues. There ought to be a way for the state to leverage the abundance of fresh food produced by small growers to build the regional processing, marketing, and distribution systems that make it possible for residents to eat fresh food, for farmers to gain prices worthy of their labor and skill, and for a much larger farm sector to employ thousands of people who earn living wages. We did it with widgets, said Bobier, and we ought do it with home-grown products that people really need. Fresh fruits, vegetables, dairy products, and meat.