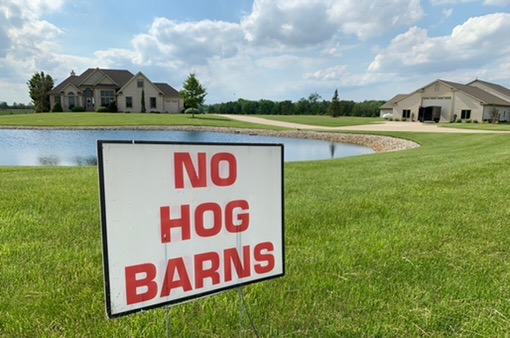 For decades, Americans mostly turned a blind eye to the industrial-scale livestock production operations that churn out cheap supplies of meat and dairy for the masses. Occasional opposition to local pollution problems and the casual animal cruelty that characterize conventional US dairy, hog, and poultry production did little to alter practices that are embedded in the rural landscape.

That may be changing. A wave of frontline resistance is now breaking across the Upper Midwest and around the country as organized campaigns aimed at regulating concentrated animal feeding operations, known as CAFOs, are being felt at every level of government, and in state and federal courts.

Opposition to large livestock operations is more intense than at any time in recent memory, say environmental advocates.

“It’s been building and building,” said Rob Michaels, an attorney for the Environmental Law and Policy Center (ELPC), a Chicago-based legal group, who is working to limit CAFO manure discharges in Ohio and Michigan. “It’s now being raised as a political issue. As a legal issue. As a legislative issue.”

On October 19, the 9th Circuit U.S. Court of Appeals issued a ruling that lends legal muscle to a five-year old petition that Food & Water Watch and 36 allies filed to compel the US Environmental Protection Agency to update CAFO permitting regulations. The Trump and Biden administrations ignored the 2017 petition, meant to compel the E.P.A to issue new rules that limit discharges of CAFO wastes into waters. The Court of Appeals said the plaintiff’s petition “raises issues that warrant an answer” from the agency. A Food and Water Watch attorney said the Justice Department has been in touch to schedule a negotiating meeting.

A week later, on October 26, Earthjustice, a nonprofit public interest law group, and 50 allied non-profit and citizen organizations from around the US filed a separate petition calling on the EPA to initiate new rule-making that would require the largest CAFOs, which are significant sources of water pollution, to apply for wastewater discharge permits under the Clean Water Act. The petition asserts that because every CAFO discharges polluting wastes EPA has the authority and duty to require them to operate under wastewater permits.

Calls for moratoriums on new CAFO construction also are being heard by legislatures in Iowa, Missouri, Minnesota, and Wisconsin. Counties in South Dakota and Arkansas have issued local moratoriums. The Missouri Supreme Court is set to decide, perhaps before the year ends,  whether counties can regulate CAFO development through local public health ordinances.

At least five Wisconsin counties and three towns have enacted temporary moratoriums, and one county is considering imposing a local ordinance next year. Last year the Wisconsin Supreme Court affirmed the authority of the Wisconsin Department of Natural Resources (DNR) to restrict large livestock farms to protect the state’s water, a rebuke to a 2011 state law that limited the DNR’s authority to regulate CAFOs.

Water Worries
The EPA has identified more than 21,000 large CAFOs across the country but just 6,266 of those operate with wastewater discharge permits under the Clean Water Act designed to control and restrict pollutants discharged into waterways, according to EPA figures.

“EPA is weak on regulations on CAFOs,” said Emily Miller, a Food & Water Watch attorney.  “Only a fraction have permits and the permits that do exist are just simply ineffective.”

An EPA spokesman said the agency would not comment on either petition. The American Farm Bureau Federation declined to be interviewed for this article.

The National Milk Producers Federation, though, issued this statement in response to the environmentalists’ petitions. “Regulation of CAFOs require a responsible approach, which sometimes isn’t the case among environmental activists who seek to use regulations to reduce the availability of animal protein products for consumers,” said Jamie Jonker, the group’ chief science officer.”

The restiveness about CAFO operations and expansion in the American countryside is due to the same kinds of disruptions occurring in states like Wisconsin, where 340 large livestock operations have been constructed, most of them big milk and hog production facilities. They collectively house hundreds of thousands of animals.

Wisconsin CAFOS pour billions of gallons of untreated liquified manure every year, and millions of tons of solid manure on hundreds of thousands of farm acres. A study for the Wisconsin Legislature made public in October found that the number of private wells contaminated with nitrates or E.coli, the intestinal bacteria, was expanding steadily and identified the source as agricultural discharges.

Waiver on Wastewater Treatment Led to Large Livestock Operations
CAFOs, though, are the only industrial polluting facilities not required to treat their wastes. The federal waiver for treating CAFO wastes dramatically reduces pollution control and operating costs. It is a primary reason the American livestock sector has rapidly changed from numerous small farms that manage livestock on outdoor pastures and barnyards to many fewer industrial-scale operations where animals spend their entire lives indoors.

And because CAFOs operate on efficiencies of scale, they have played an outsize role in keeping commodity prices low and contributed to the closure of small farms in America.

As CAFOs gained influence, for example, Wisconsin in November counted 6,172 dairy farms,  down from 11,260 a decade earlier, according to state figures. A study by the American Farm Bureau Federation found that from 2011 to 2020 Wisconsin led the nation in farm bankruptcies.

Though the Biden administration dispatched the EPA administrator and several aides to Cleveland earlier this year to celebrate the 50-year anniversary of the Clean Water Act, the 1972 statute has not come close to achieving its “fishable and swimmable” goal for American surface waters. The problem is unregulated nutrient discharges from agriculture.  In 2016, the EPA identified phosphorus and nitrogen discharges from U.S. farmland as “the single greatest challenge to our nation’s water quality.”

Harmful algal blooms caused by phosphorus discharges from CAFOs now contaminate many of America’s iconic waters, among them Chesapeake Bay, Lake Okeechobee, Lake Champlain, California’s Clear Lake, and Lake Erie. “Somewhere between 88 percent and 94 percent of the problem is caused by these CAFOs, these megafarms and their nutrient nonpoint source runoff. Everyone knows it,” said Wade Kapszukiewicz, the mayor of Toledo, Ohio, which was forced in 2014 to shut down its drinking water plant for three days because of bloom-generated toxins. Half a million residents lost their drinking water supply.

CAFO nutrient discharge is worse in the Corn Belt states: the Dakotas, Minnesota, Wisconsin, Iowa, Illinois, Missouri, Nebraska and Kansas. The EPA counted 9,332 concentrated livestock and poultry operations across the Corn Belt in 2021. It is not known how much manure they all produce each year, but it’s prodigious. For comparison the 291 CAFOs in Michigan generate 4 billion gallons of untreated raw liquid manure annually, and millions of tons of solid manure, according to the state environment department.

In Iowa, where almost 4,000 CAFOs operate, nearly every mile of streams and acre of surface water is impaired by nutrients or E.coli. Just 167 Iowa CAFOs have wastewater discharge permits, according to the E.P.A.

A Difficult Path To CAFO Regulation
The Biden Administration and CAFO opponents know full well that changing the regulatory rules of the CAFO game will be a fierce struggle. Environmentalists, small farm advocates, and E.P.A. administrators under previous administrations, Democratic and Republican, have tried to cross this same ground before and been turned back in federal courts by politically powerful farm groups led by the American Farm Bureau Federation and its allies in the various state and national dairy, pork, poultry, and beef associations.

In 2003,  in response to a lawsuit brought by Natural Resources Defense Council and Public Citizen, the EPA issued a new rule that obligated CAFOs to apply for discharge permit unless they could demonstrate that they had “no potential to discharge” damaging nutrients. That rule was challenged by livestock operators, who in 2005 convinced the Second Circuit Court of Appeals to strike it down.

The E.P.A. tried again with a new rule in 2008 that limited the permitting obligation to CAFOs that “propose to discharge” wastes. But in 2011, in a case brought by the National Pork Producers Council and other farm groups, the Fifth Circuit Court of Appeals struck that rule down, too. In both cases plaintiffs argued the law didn’t give the agency authority to regulate “potential” or “proposed” sources of pollution.

With their petitions and grassroots campaigns, activist legal and non-profit groups are pressing E.P.A. to try again. They assert that every CAFO operating in the United States is a source of “actual” wastewater discharges that require much more effective regulation. “The E.P.A. under its current leadership acknowledges that what we’ve asked for needs to happen,” said Amy van Saun, a senior attorney for the Center for Food Safety, which is a party to the 2017 petition. “I don’t think they have any legal way to say no.”

A version of this article was published by The New Lede on November 17, 2022.

For a comprehensive and fact filled assessment of the causes, impediments, and solutions to toxic nutrient discharges and harmful algal blooms see Circle of Blue’s project — Danger Looms Where Toxic Algae Blooms.

III. In A Year of Water Quality Reckoning, National Imperative is Impeded

VI. Remedies for Harmful Algal Blooms Are Available in Law and Practice