Every now and again you cross paths with someone who just vibrates differently than the ordinary Joe. It’s more than superior intelligence, or charisma, wisdom, energy, and experience. It’s how rare people draw those gifts together in a way that is so graceful and encompassing and fearless. A statesman, if you will. Michigan is in desperate need of more of these kind of people.

Michigan’s farm sector, fortunately, is graced by an authentic leader, a Nigerian-born agriculture economist named Soji Adelaja, who leads the Land Policy Institute at Michigan State University.  Early in his career Soji spent time on Wall Street, where he applied the  very same economic models used for attaining crop production efficiency to investment forecasting. He made his name at Rutgers, where he was a senior executive in the agricultural extension program, and among other things, developed New Jersey’s $1 billion farmland and open space investment fund. 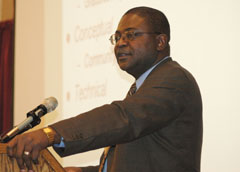 MSU convinced Soji to move himself and his family to Michigan nearly four years ago, when the governor and Legislature seemed poised to enact pieces of a new smart growth development strategy that included conserving farmland and open space, strengthening cities, and slowing down energy- and money-wasting sprawl. Though Soji’s a nationally renown economist, at heart he’s really an accomplished public policy advocate who was convinced that Michigan was poised on the threshold of a new economic era based on better uses of land.

Not long after Soji arrived, unfortunately, the bottom dropped out of Michigan’s economy and instead of talking about how to rein in sprawl and smart growth the state conversation shifted to how to prevent decline. Like other advocates Soji retooled the message and suggested that Michigan’s competitiveness could be tied to how we treated cities and land, how we thought about food and farming, how reliance on a multitude of interlocking ideas instead of just one idea — auto manufacturing — could make the state’s transition much easier. Soji, in short, began to talk about prosperity. He was among the first to frame that big idea around leveraging Michigan’s agriculture sector in new ways. He spoke here today in his lovely Nigerian accent to some 300 food and farming specialists and advocates, arguing that good food grown and consumed in Michigan is as important to the 21st century as auto manufacturing was in the 20th. There was a time not terribly long ago when such a notion would have been considered so far from the mainstream as to be almost laughable. Not any more. In food, land, and good health lies the foundation of a durable economy that Michigan is desperate to develop.