How important is the Internet? We learned the answer in the old farmhouse at the top of the hill in Benzonia, where the Michigan Land Use Institute was founded. There were eight of us with the organization then, doing our research and writing at old desks topped by new computers and monitors, all woven together on an internal server that also provided access to the Internet.

It was 1998 and we thought we were pretty hip. After all, for a small non-profit we’d done well. Six months before, the Institute launched the first version of its Web site. One sweaty July afternoon, though, the site went down, and with it our internal server and email. I”ll never forget the next thing that happened. One by one closed office doors opened. 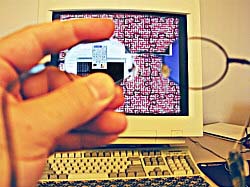 Young staffers, eyebrows raised, joined the middle age people in the building’s central hall. No question. Work came to a standstill and wouldn’t resume until service was restored. We looked at each other, shrugged, and creeped back to our desks to see if we were back online. We weren’t, so we took the afternoon off and rolled down the hill to the beach at Crystal Lake.

I was reminded of that afternoon when NPR and other news desks took note this week of the hacker attack on several of the important server installations that keep the World Wide Web operating. The frame for the national newsies was “what if.” The frame for techies in the blogosphere was either “we told you so,” or a surprisingly flip and almost cynical “who cares.”

“It didn’t really do anything,” said Gizmodo, one of the most popular blogs covering technology, “at least not anything that normal users noticed.”

Today I had a conversation with an old friend who edits in New York . She asked me what I thought the attack meant, and where “it all,” i.e. the Internet, was going. I’m no soothsayer, but let’s consider a few views about the Internet that are unassailable at this point. For one, if television went down for a week, does it really make much of a difference in the course of our lives over those seven days? Perhaps for advertisers, jocks, actors, newscasters, and the few million of us who can’t live without the tube. Hardly a moment to panic. Same for radio or newspapers. If they disappeared for a week, what would it really matter?

But if the Internet went down for a week, there would be a global economic crisis. Companies would collapse. Entire economic sectors would retreat. Business and industry would come to a standstill at the precise moment that the servers failed. The Internet is so tightly meshed into human commerce that it is impossible to exist without it. What’s more, the evolution of the Internet as the dominant invention of its age started in 1994, just 13 years ago, when AOL provided the first dial-up service.

I like to compare these first years of the  Internet to the early decades of the auto industry. At one time, around 1917, 23 automobile companies in Detroit, many of them located along Woodward Avenue, assembled more than 1 million vehicles a year. Building cars in Detroit changed the world. It prompted new wealth, union organizing, and land and resource-hungry development patterns. Cars also produced a culture of ease, convenience, and physical lassitude based on cheap oil, cheap land, and massive spending on roads and highways.

The auto age is ending. The Internet is close to surpassing the auto economy and culture, if it hasn’t already done so. The digital backbone of the Web supports a global economic, cultural, communications, trade, entertainment, and governing infrastructure that has never been more interconnected, and can’t be replaced.

Flip: Seizing The Message and Messenger