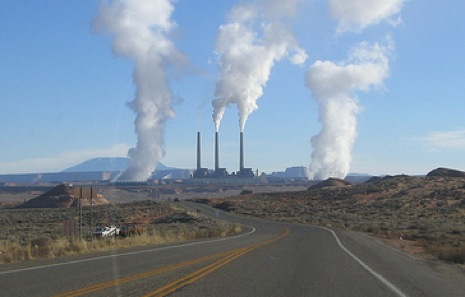 Sourcewatch today reports on the national campaign to end energy production from plants using coal as a fuel source. “Between 2000 and 2006, over 150 coal plant proposals were fielded by utilities in the United States. By the end of 2007, 10 of those proposed plants had been constructed, and an additional 25 plants were under construction,” said Sourcewatch.:

In 2007, 59 coal-fired plants were cancelled, abandoned, or put on hold. The anti-coal forces have been helped by market trends that are testing nearly every industrial sector challenged by obsolete strategies, especially polluting industries. Fifteen of the plants, said Sourcewatch, were rejected outright by regulators, courts, or local authorities. In the remaining 44 cases, utilities abandoned plants because of “(1) rising construction costs, (2) insufficient financing or failure to receive hoped-for government grants, (3) lowered estimates of demand, and (4) concerns about future carbon regulations.”

The question here, of course, is how coal fits into the clean energy economy that the Apollo Alliance and others are pursuing. It’s a sensitive subject for all sides in that alliance — labor, environmentalists, progressive businesses. America has an abundance of coal. Big utilities are the major source of carbon dioxide and other pollutants involved in warming the earth. The technology for capturing and sequestering carbon is brand new and untested. The nation’s demand for electricity continues to climb in most parts of the country. Renewables are not yet mature enough to replace power generated by coal.

The ready response from environmentalists is that not another conventional coal plant should be built. The financial markets seem to agree, having warned utilities they are not prepared to invest in a conventional plant because of the expectation that the United States will enact strict regulations on carbon. Costs for conventional plants are soaring.

Labor meanwhile is nervous. Their members mine coal, transport it, and build and manage the conventional plants. Labor is suspicious that the jobs associated with building and managing wind, solar, biomass, and other renewables will not be union jobs. Still, labor understands that the potential for new jobs in the industries that will retrofit new buildings with energy-efficient materials, the jobs associated with constructing the new high speed rail systems, building the equipment, and maintaining the lines — those are union jobs and are likely to reduce power demands so that new coal plants need not be built.

Complexities to be sure. Good sources to follow the development and challenges to new coal-fired power plants are the

One thought on “More On Taut Times For
Big Coal”