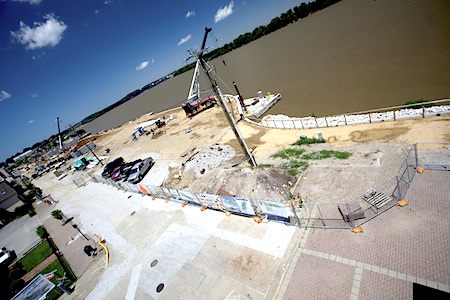 The privilege to spend six months studying an American community is rare in journalism. Nevertheless that was the assignment from Citistates last spring. Immerse yourself in Owensboro, Kentucky and emerge with a clear sense of where the community is, and where it might consider going in the 21st century.

Last week, in a series of public events, Citistates described the findings in What’s Done, What’s Next: A Civic Pact. The project found a number of big impediments to Owensboro’s progress — particularly its recent tilt to Tea Party austerity. But that, and several more negative trends — poverty, obesity, rising rates of meth addiction, diminishing median incomes, to name a few —  are a reality check for a city and county that view themselves as distanced from the mainstream, but really aren’t.

Owensboro and Daviess County’s most recent narratives, in fact, are an exception. Local governments are actually leading – understanding the globally competitive context, visualizing the local response, then deciding and managing specific actions.

Working collaboratively with each other, as well as with schools, colleges, business organizations, and non-profits, the city and county have gathered the raw materials of a mission-oriented community environment that allows entrepreneurs and their staffs to flourish. The result, already emerging, has led to more home-grown businesses where effective executives are rewarded with opportunities to move up in the organization instead of out to a different job in another place.

Great communities are distinguished by their ability to instill such value-based incentives, which reward hard work and provide favorable conditions for people to succeed. The United States in the first years of the century has temporarily lost that ability. Owensboro offers invaluable lessons about how to recover that skill. It is steadily empowering its young people and its business owners to be adept in an unpredictable era of transformation.

Owensboro, it turns out, is an example of hope for a sore and confused nation. It is trying something new in order to spark something different. Here are recommendations, several of which were also made in previous Owensboro planning documents, to blow more oxygen into the fire of change that Owensboro has started.

Citistates made some recommendations — see below — that together form a new narrative for this small city and rural county. Chapter Three of A Civic Pact, which includes a more comprehensive discussion on each recommendation, is here.

Thank you to Rodney Berry, Kathy Stroble and Shelly Nichols for all the help in setting up interviews and providing guidance. And thank you to the Hager family and the board of the Public Life Foundation of Owensboro for making the project possible. Thanks also to my Citistates colleagues Curtis Johnson and Neal Peirce, who edited the manuscript and provided expert feedback.

These suggestions are not all-inclusive. They don’t, for instance, deal with the medically uninsured, or alterations in Medicare and Medicaid that are likely in the next generation, and will affect Owensboro’s growing population of seniors, and the region’s less economically fortunate.

These recommendations, rather, focus on what Owensboro’s residents and leaders can achieve over the next generation in what Mayor Ron Payne calls “this little city on the move.”

1. Undertake a New Community Strategic Plan – A new strategic planning initiative is needed to propel the city and county to the next stage of its progress as a center of opportunity.

2. Cultivate and Recruit Women to Serve as Elected and Appointed Leaders – Almost 52 percent of Daviess County’s adults are women and that percentage is not reflected in elected positions in the city or county governments.

3. Strengthen Internal and External Marketing and Communications – More focused outreach is vital to show citizens why a publicly-funded program of education, downtown development, and innovation makes sense in strengthening the economy over the next generation.

4.  Establish a Joint City-County Office of the Ombudsman — Thin out the cross-cutting permitting process while also providing the fairness and access that citizens expect.

5. Establish and Fund the Owensboro Promise – Provide every graduate of the six Owensboro, Daviess County, and Catholic high schools scholarships for tuition and fees to attend a two- or four-year college in or outside Kentucky.

6. Establish the Owensboro Top 20 Young Achievers Program – Provide the most talented young adults the chance to be part of Owensboro’s future and to stay connected in an elite mission-oriented group.

8. Generate More Diversity in Civic Life and Improve Business – Recruit investment and development capital from Asia, and especially from China.

10. Strengthen Transportation Hubs, Build a Streetcar Line – Owensboro’s opportunities over the next two decades are significant in air, ground, and river transportation.

11. Put a Brake On Sprawl – Replace the love affair with big surface parking lots with a marriage to homes and businesses, recreation, and education infrastructure that is reachable on foot, on a bike, public transit, or a very short car ride.

3 thoughts on “A Civic Pact: Owensboro’s Next Development Strategy”