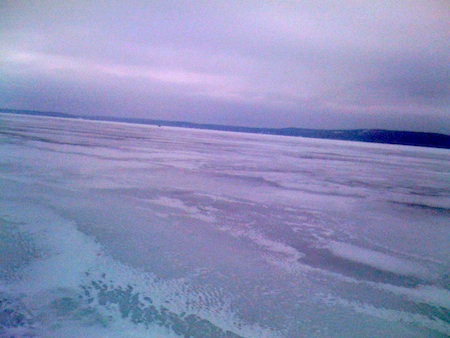 Duke Energy, which last month merged with Progress Energy to become the nation’s largest electric utility, proposes to build a 112-turbine, $360 million wind farm in four rural townships in Benzie and Manistee counties. The company, in its public statements, says it hopes to begin construction in the spring of 2012. Duke also says it has reached binding leasing agreements with landowners who own 10,000 to 11,000 acres of the 16,000 acres in Duke’s wind development zone.

My own view is that the project, carefully and intelligently sited, is a good thing for the region. That’s an easy call for me to make given that I just spent three years as communications director for the Apollo Alliance, a proponent of “clean energy, good jobs,” and the U.S. Climate Action Network, which is convinced about the science of climate change. It’s clear to me that wind, solar, nuclear and other non-fossil fueled  energy sources represent a sound response to the warming earth. I also am convinced that the new public and private revenue that the project generates is a plus for families, job growth, and local governments.

But my experience seeking to site new renewable energy projects in this region, and the entirely unscientific poll I’ve conducted with friends and neighbors in Benzie and Manistee counties, indicates to me that Duke will be lucky to build one new turbine.

Resistance is High
With the exception of landowners who seek to gain $20,000 or more a year in lease payments for every wind turbine sited on their ground, the resistance to the towers is powerful. They are seen as too big, too loud, too intrusive, and too much of a threat to property values and this region’s small town way of life. Moreover the people I know, including myself, who view the wind power project as an important step to leverage the new energy markets of the 21st century, harvesting new public and private income and cleaner energy, are not likely to jump into the policy and advocacy ring.

My involvement, for instance, is likely to solely focus on reporting new developments. The narrative of Duke’s proposal, whether they succeed or not, is a story about this region and this country.

Last week, following my “Afraid of the Wind” post, I received several messages from two smart friends who have differing views of the Gail Windpower Project.

Two Lawyers, Two Views
Jim Olson, a friend who was raised in Traverse City, now lives up the road in Honor, and is routinely recognized by his peers as one of the country’s best environmental lawyers, supports wind energy, but is reserving judgment on the Gail wind project.

“I support wind energy in our region, including the places where the wind is, the coastal areas,” he writes. “This does not mean I support Duke Energy’s project as proposed.  To date, I do not and will not until I see more of whether and how Duke Energy will work with local landowners, communities, and those from whom they are leasing the location to exploit the wind.  In addition, I see wind as a commons, in which all should share in some way. So I’m still thinking through what this looks like with the large, centralized corporate, big wind turbine model.

“As I said in my emails and elsewhere, I prefer a lower more appropriate wind turbine/ or wind generation in our region, including community wind projects and I believe Congress and our state legislature must provide an equivalent or even playing field through tax incentives for all of us, not just Duke or big energy.

“The dilemma for some about this project is the lack of subsidies and legal structure for alternative wind energy projects, such as community, lower scale, and residential,” Jim wrote. ” To be sure there are some tax breaks for residential and others businesses, but little structure for community smaller call electrical utility wind energy operations.”

“Under current tax, financial, and legal conditions it is next to impossible for these alternatives to make much headway,” Jim continued.  “Hence, the country, and communities like Arcadia/Frankfort are faced with either “yes” or “no” in participating in the nation’s commitment, an absolutely necessary one, to renewable wind energy – energy independence, non-fossil fuels, mitigation of climate change effects that undoubtedly will occur and worsen if nothing is done.

“So we need to support wind turbines,” Jim added. ” This is because of climate change and because there are significant tax subsidies that make them real; but the local area accepting the effects from large scale operations, like Duke’s, must receive open-minded measures that minimize impacts, address land use, and level the playing field, sort of speak, in the social justice sense, due to lack of options and alternatives.

“The other thing I’ve been thinking about is the cross-effects of competing subsidies for wind turbine versus unconventional fossil fuel development in the west.  Clearly, these subsidies, along with any for so-called “clean coal” have to go or be reduced, which is a political impossibility it seems, for now anyway. Otherwise, Duke simply takes subsidies for all, including wind, and uses those major economic cash inflows to keep burning coal and other fossil fuels.”

Arcadia’s Friend
Tom Carr, a friend who owns a lovely home in Arcadia Township, and a lawyer whose family has summered along the northern coast of Lake Michigan here for generations, sent a thoughtful essay encompassing his opposition. “The likelihood is that the vast majority of Arcadia residents and visitors would support harnessing wind energy if it could be done economically and without significant “collateral damage” to the local environment.”

Tom wrote: “I am a 3rd generation property owner in Northwestern Lower Michigan, my grandfather having begun coming to the area in 1920 or so.  My views are those of my own family, my brother, my sister, our 9 adult children and their families.  Of that group, 6 own property on the lakefront or overlooking Arcadia.  I believe my thoughts mirror those of the vast majority of property owners in and visitors to Arcadia Township.

“The reality is that “large scale operations” of any kind don’t belong in these areas, whether wind farms or hog farms.

“It may be possible to identify relatively remote areas of Arcadia, Blaine, Pleasanton and Joyfield Townships where placement of 112, 495-foot-high industrial wind turbines is feasible.  However, there is no place for such installations in the “valley” of Arcadia or on the surrounding ridge lines.

“Perhaps the turbines can be located in remote areas of the Townships, so as to significantly alleviate or eliminate altogether the aesthetic, health, tourism and support services and blade flicker issues.  Even if that is the case, though, as conditions precedent to commencing construction, Duke should be required to compensate adjoining property owners for diminution in their property values and provide surety for the cost of removal and restoration.

“I am part of an extended family that has enjoyed the area for more than 90 years, has major emotional and financial commitments to it, wants to see the beauty, serenity, and way of life continue unabated. I feel no more obligation to put any of what I  —  and, for example, my siblings and the 9 families in the next generation of the Carr clan  —  value in Arcadia at risk to support “our nation’s commitment . . . to renewable wind energy” than I believe that residents of the Grand Traverse region would if the project were to be sited on Old Mission Peninsula or any of us would were it to be sited on the Sleeping Bear Dunes.

“To the contrary, I will work others to see that the project does not impinge upon our valley or the surrounding ridge lines, and will happily support like-minded people in the other affected townships.”

2 thoughts on “About The Gail Wind Farm: Two Perspectives”