Skip to content
May 21, 2022
Grassroots Opposition to Clean Energy 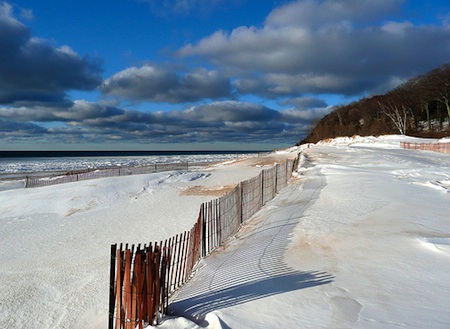 Earlier this month, on a snowy afternoon, the newly renovated Garden Theater held the largest crowd I’ve ever seen indoors in the small Lake Michigan coastal town of Frankfort, with the exception of girls and boys basketball games. On tap that day was a polemical documentary film, “Windfall.” Two groups of citizen activists held the screening to build civic momentum in opposition to a good-sized utility-scale windfarm proposed for Benzie and Manistee counties.

Afterwards the big crowd, composed principally of local residents, many of whom I have known for years, heard from Ray Franz, the newly-elected Republican state House Representative, and from Elizabeth Wheatley, an assistant professor of sociology at Grand Valley State University in Allendale.

The film and the post-screening remarks by Franz and Wheatley also were unrelentingly critical. Franz announced his intention to campaign for dismantling the state energy tax credits, state renewable energy standards, and other public investments and policies that attracted Duke Energy to consider building 112 utility-scale wind turbines in our beautiful and gusty corner of the country. He essentially said such measures were a waste and an overreach by government to influence free markets. Wheatley described attending the first-ever international symposium on the health effects of wind power, held in Ontario in October. She reported, based on anecdotal evidence she collected, that low-level sound waves from wind turbines could cause spontaneous abortions in farm animals.

I’ll be writing about the fate of Duke Energy’s $360 million proposed clean energy investment in future postings. For background, Glenn Puit of the Michigan Land Use Institute just posted a first-rate assessment of the project and the issues. Jim Dulzo, the Institute’s managing editor, is readying an online report for Sunday that is meant to clarify some of the science related to wind turbines and health effects.

More significant to me is what that January 16 event illustrates about the condition of our community, and in a larger sense,  our country. Stripped to its core, the meaning of that event is this: We’re afraid of the wind.

I’ve spent a career documenting in precise detail the consequences, unintended and otherwise, of technology scaled up and applied across industrial sectors. In March, 1979 I covered the accident at the Three Mile Island nuclear plant in Pennsylvania, watching as General Public Utilities engineers vented radioactive gases to prevent a hydrogen-fueled explosion that could have torn the top off the melted reactor’s containment vessel.

Ten years later I was in Valdez, Alaska, reporting on a drunken Exxon captain who’d been asleep when the bottom of his tanker was ripped open on a reef that every sea captain on Earth knew was there and had been studiously able to avoid. The rest of that assignment, and two more to Alaska, focused on the aquatic effects of crude oil in cold maritime environments, and the cultural fracturings all that oil prompted in Cordova and the other fishing villages of Alaska’s Prince William Sound.

Fifteen years after that I took clear note of the changes in northern Michigan’s snow sports industry as a result of warming temperature. And four years later reported on the 12-year drought in Australia’s Murray-Darling Basin, the nation’s pimary food-growing region, where entire farm sectors were being put out of business by the most visible example of the effects of climate change in any industrial nation.

In between all of this my pen, notebook, now laptop computer and IPhone, traversed the various risk-benefit, economic, scientific, and political experts, the grassroots activist offices, corporate suites, and major media newsrooms that form the basic geography of vigorous environmental dispute in the U.S. I’ve explored in too many published words to remember, as well as broadcast interviews and public speeches the gathered facts about the toxicity of farm chemicals, the wisdom of introducing genetically-engineered organisms into the environment, the safety of burying radioactive wastes in underground dumps in New Mexico and Nevada, the hazards of nuclear weapons production and disposal, the cost and risks of incinerating dioxin-contaminated wastes, just to name a few.

The decades of the late 20th century and the earliest years of the 21st that formed the heart of my career were largely defined by the central idea of American environmentalism. The industrial world was a danger to air, water, land, wild creatures and people. But sound law, effective regulation, civic activism, and strong reporting could be applied to substantially reduce the risk. America, in short, showed itself capable of mitigating harm, cleaning up pollution, and preserving the wild places that supported the nation’s natural diversity. I have lived for 20 years in northwest Michigan, a clean and beautiful place that proved the effectiveness and value of these ideas.

I just never thought we’d be afraid of the wind.

More than three years ago my work shifted to a new path fostered by the understanding that climate change, national security risks, and the nation’s crying need for innovation to spark job growth represented a remarkable opportunity for environmentalism. One of the most important solutions for the warming planet, oil-related wars, and new jobs was pursuing clean energy development here at home. Nature offered an answer in unlimited quantities of energy from the sun, the wind, the earth (geothermal), and from converting plants to fuel. Applying our intelligence to harvest these sources, including producing cars that didn’t need oil-based fuels, represented a much safer way of conducting our affairs.

The basic construct of a transition to new energy sources seems sound. By no means, though, are Americans convinced about the benefits or the risks. As I noted in an earlier post this week, Republicans are suspicious of the science of climate change and ideologically opposed to public investment in clean energy. Grassroots activists are resisting construction of clean energy projects of scale all over the country and especially here in Michigan. Most everybody else is hardly paying attention, driven instead by concerns about job security, falling incomes, the price of gasoline, their liberal neighbors, their conservative neighbors, China, terrorism, you name it.

Boiled down, the country is expressing its fear of the future. Fear is the dominant American emotion of our time. Fear could halt a major clean energy investment in my home county and has already done so in many others across the country.

How is it that a nation so fearless that it put a man on the moon, built an interstate highway system, protected civil rights and women’s rights and gay rights, made industrial workers the highest paid on Earth, instituted an environmental protection program that grew the economy eight-fold, strengthened its great universities, and elected a black president has become immobilized? How is it that we’ve become afraid of the wind?

One thought on “Afraid of the Wind”