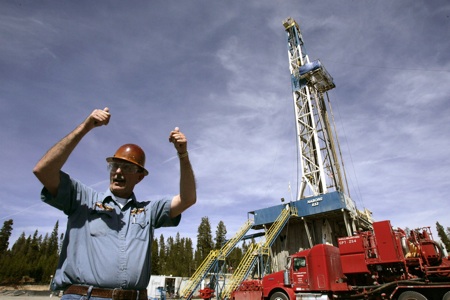 One of the potential success stories of clean energy development on private and federal lands in the West involves NV Energy, which announced in February that it will purchase 32 megawatts of renewable energy from a planned Central Nevada geothermal plant. The Ram Power Corporation is developing the Clayton Valley Geothermal Project, which is scheduled to begin construction in 2012.  It is one of five geothermal leases that Ram Power has acquired from the Bureau of Land Management in Esmeralda County, Nevada where the developer hopes to generate as much as 160 megawatts of electricity.

Talk about clean energy that is capable of generating baseload power without climate changing emissions and at prices competitive with wind or coal. But geothermal development is slow going. Projects are expensive, and often located in places off the high-transmission path. And in some states rich in geothermal resources, Hawaii in particular, the high temperature resources are either located in sensitive environments or close enough to existing communities that people just don’t want to go there. So Hawaii still burns a lot of oil for its electricity, though the state is moving aggressively to succeed in clean energy development.

Nevada, which produces 300 mw of geothermal power annually, is the number two geothermal energy producer in the country, behind California. It has more future geothermal energy in the planning stages than any other state, potentially 200 mw to come between 2012 and 2014.  Ormat Technologies, which has gained $13 million in Energy Department funding, is planning to build a geothermal plant capable of generating at least 40 mw of baseload power in Nevada’s Independence Valley. Construction could start in 2012. It also has bought into a geothermal project in Elko County, which it will develop in phases, the first of which calls for generating 16 mw.

Senate Majority Leader Harry Reid, who represents Nevada, has been a big help to the state’s geothermal industry, the result of $90 million in American Recovery and Reinvestment Act, which could eventually add 1,000 state jobs. But Nevada also has much more geothermal energy it is capable of producing, perhaps 3,000 more megawatts, the equivalent of three big coal-fired power plants. The rub is the cost — $12 billion — and that most of the geothermal resources in Nevada are located in the northern portion of the state, meaning a new transmission line would have to be developed in order to move power to the southern portion of the state. And as we reported earlier this week public resistance to new transmission lines can be fierce.

Oregon is expected to receive $40 million for geothermal development, according to Senator Ron Wyden. And California, which has 46 operating geothermal plants generating over 2,500 mw of electricity, more than any other state and second only to the Phillipines, will receive $23 million in  federal investment, according to the list of projects made public last year by the Energy Department.

Hawaii, though, has only one project on the list because it has one operating 25-30 mw plant — Puna Geothermal Venture — and no others. Reason: Public resistance in a state with bounteous volcanic and hot spring activity and lots of underground heat. But the location of the geothermal resources has stirred lots of opposition over development, including from the influential Rainforest Action Network. The plant’s operations, largely due to a blowout of a well in 1991, also has raised safety concerns. The current plant, initially developed in the early 198os and shut down, was modernized, enlarged, and started in 1993.

Hawaii still generates a sizable portion of its electricity with expensive oil. Despite proposals by geothermal development companies and active interest by the state to promote the technology, which state officials view as clean, renewable, and safe Hawaii continues to burn oil for power because citizens discourage geothermal as a ready alternative. Hawaii is busy promoting biofuels to replace diesel fuel for electric generating plants, and a new generating station is expected to receive its fuel from a biodiesel plant in Grays Harbor, Washington, that converts canola from Canada into fuel, and that just restarted operations after an explosion late last year.

Talk of Tianjin Climate Conference: China and U.S. Are Electrifying The Car