Just as the Traverse City Record-Eagle aims another editorial broadside to block the local utility’s decision to pursue a right-sized, state-of-the-art, clean, renewable 10 mw wood biomass plant, evidence of public support emerges from other states where the technology is being pursued with vigor.

The new wood biomass projects are a clear indication that momentum for the technology and fuel source is pushing ahead despite misplaced public opposition in a number of states, including Michigan. The key issue in managing growing numbers of new biomass plants is the fuel supply. Clearly, damaging forests to generate power is in nobody’s interest. The same is true for not ensuring sustainable forest practices to produce a steady supply of wood that keeps prices stable. One reason that Traverse City Light and Power is considering wood biomass is that the price of natural gas has been so volatile in recent years. 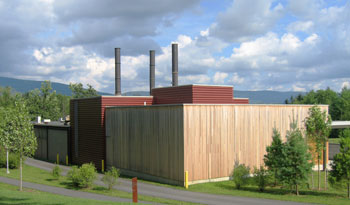 For reasons that may never be clear to me, northwest Michigan’s largest daily newspaper has embraced the hysterical (forests will be “slaughtered), and factless (ash is toxic, emissions are higher than a coal-fired plant) reasoning of a group of extremely ill-informed environmentalists to argue against the TCL&P wood biomass proposal. Today it published a report from Cadillac, 45 miles south of here, where wood biomass has generated power for decades. Though editors emphasized the more emphatic views of some residents, the reporter actually found considerable comfort with the old plant, even those close to the plant. The paper never mentioned that the state-of-the-art plant proposed by TCL&P is much smaller, much newer, much cleaner.

Fortunately a more informed and pragmatic view about the value of state-of-the-art biomass generation is starting to emerge. A public opinion survey by Northwestern Michigan College shows 55 percent of the utility’s customers support the wood biomass proposal, a finding that was not covered by the Record-Eagle. The mayor of Traverse City, environmental lawyer Chris Bzdok, supports the biomass proposal, as does the director of the state Department of Energy, Labor, and Economic Growth. The Record-Eagle, which closely reports on every statement made by critics, also didn’t cover the public meeting that featured the DELEG director’s endorsement. The Michigan Land Use Institute issued a report several weeks ago that called for greater focus on energy efficiency and found room for what it called a small wood biomass plant like that proposed by TCL&P.

Full disclosure: I helped TCL&P design and execute its public engagement process. When weighing the options for generating baseload power, something that TCL&P customers need, the utility has three choices: coal, the dirtiest fuel of all; natural gas, which is not renewable and subject to price swings; and wood biomass. The latter proposal is right-scaled, local, fueled with sustainable forest practices, generates much lower emissions than coal, is highly efficient with its combined heat and power and gasification design, keeps $4 million annually circulating in the community that is now being sent to Wyoming, railroads, and a downstate coal-fired utility, will employ around 20 people to operate and 20 more in supplying fuel, and represents a $30 million high-tech investment in renewable energy generation.

Green Mountain College in Poultney this week opens a small wood biomass plant that will produce 20 percent of the electricity used by the Vermont school and 85 percent of its heat. The $5.8 million combined heat and power plant will is burn 4,400 tons of wood chips a year, replacing 200,000 gallons of heating oil..

“It’s a huge movement forward for a college that’s trying to educate about sustainability across the curriculum,” Bill Throop, the provost, told the Rutland Herald.

The project is the result of nearly five years of work by students and staff to respond to energy security, peak oil concerns, renewable energy, and the climate crisis. The intent was to replace the school’s oil-fueled boiler with a cleaner, renewable, and more efficient power plant. Similar plants operate at Bennington and Middlebury Colleges in Vermont. The Bennington plant is pictured above.

In New York, NRG Energy Inc. last week was awarded a 10-year contract from the New York State Energy Research and Development Authority (NYSERDA) for power generated using renewable biomass fuel at its Dunkirk Generating Station in western New York. The project, which is expected to come online by the end of 2011, will produce up to 15 megawatts of the station’s output.

“Adding sustainable biomass to the fuel mix cuts emissions and supports the state’s goal of producing 30% of its electricity from renewable sources by 2015,” said Drew Murphy, President of NRG’s Northeast Region, in a news release. “This project will also create up to 50 processing and transportation jobs in western New York and produce enough electricity to power 12,000 households.”

Last year, the New York Public Service Commission expanded the state’s renewable portfolio standard to 30 percent renewable electricity by 2015, up from the 25 percent level set in 2004. The change prompted NRG to propose using biomass as a primary fuel at its Montville Generating Station after repowering one of the facility’s existing units to produce up to 40 MW of electricity. In Louisiana, NRG has created a 20-acre test site using locally grown switchgrass and sorghum to be used as a biomass fuel at its Big Cajun II plant.

Speaking of Louisiana, Baton Rouge may soon be the site of a $124 million wood pellet-making plant, whose products will be sold overseas and used as fuel. William New, the Wisconsin-based chairman and chief executive officer of Point Bio Energy LLC of Baton Rouge, said the plant will employ between 85 and 100 people and generate 500 to 1,000 other related jobs as it taps the area’s timber industry for its raw materials and makes use of the port

“The capacity of the plant is 400,000 to 450,000 tons a year,” New told the Associated Press. “We have ongoing discussions with a number of people in Europe to take all or part of the production of the plant.”

According to Wood Resource Quarterly, the demand for wood pellets is around 8 million tons a year in northern Europe, and that number is expected to double or triple over the next decade. The global trade for woody biomass, particularly pellets, nearly doubled between 2003 and 2008, to around 3 million tons.

In Port Hawkesbury, Nova Scotia two companies — Nova Scotia Power and NewPage — announced plans last week to develop a new 60 MW biomass co-generation facility. The $200 million plant is under review by the Nova Scotia Utility and Review Board, and if approved could be finished by late 2012.

The project, according to local news reports, is expected to create an estimated 150 new jobs in Northern Nova Scotia, primarily in the forestry sector, in addition to maintaining the Port Hawkesbury mill’s existing workforce of approximately 550 employees. Approximately 50 person-years of employment will also be created during the construction phase.