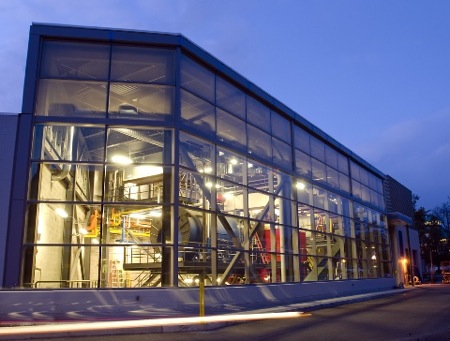 A few months ago I became a communications adviser working several hours per week with Traverse City Light & Power, a small municipal utility in my home region that has proposed to acquire 30 percent of its power by 2020 from local renewable resources.

In pursuit of that goal TCL&P has purchased 10 mw of wind power from a windfarm in McBain, Michigan 50 miles south. It also purchased 2 mw of landfill gas generation and is investing in new solar capacity.

TCL&P also has proposed building a 10 mw wood biomass gasification plant that also would generate heat energy for nearby industries and businesses. (The wood biomass plant in the picture above is in Middlebury, Vermont.) But the combined heat and power plant has encountered surprising resistance from a number of ardent environmentalists, including the grassroots Northern Michigan Environmental Action Council, this year celebrating its 30th anniversary, which worries about emissions, ash disposal, and the consequences to the region’s forests. If you read the TCL&P Web page, you’ll see that the plant would burn as cleanly as a natural gas plant, produce ash that is non-toxic, and that a sustainable forestry program is at the top of TCL&P’s priorities.

Resistance to Clean Energy Nationwide
The push back from the environmental community, though, prompted me to wonder how many other clean energy projects around the country are encountering similar grassroots resistance? I am concerned about a number of things, including the potential for a damaging schism to develop in the environmental community over clean energy and climate action.

I work in Washington now as media and communications director of the U.S. Climate Action Network. I know that on the one hand national organizations are pushing hard in DC to limit carbon emissions and for more money to finance the clean energy transition. National and state organizations also are pressing state governments and legislatures to enact or increase Renewable Portfolio Standards  and other clean energy and climate measures.

On the other hand, at the grassroots in more than 30 states, citizen opposition has developed to campaign against the renewable technologies that hold the most promise to replace coal. In some cases the opposition is led by local affiliates of national organizations we work with — Sierra Club in particular.

It’s important to note that my colleagues and friends in the environmental community are not nearly as concerned as I am. One colleague told me she views the grassroots opposition as part of the traditional checks and balances that have distinguished modern American environmentalism. A colleague here in Michigan, during a long conversation on the grassroots push back, said that in many cases the opposition was generated by local landowners and others who are not connected to the environmental movement.

Taking all that into consideration I’ll treat the reporting exercise in this post and others to follow with care, as I always do. Here in Michigan, along with the resistance to the TCL&P 30BY20 plan, grassroots campaigns also are active to block offshore wind energy development in Lake Michigan (shoreline owners are fighting viewshed issues) and to stem wind development in Michigan’s thumb
region (noise and vibration are issues.) The Sierra Club’s local chapter is active in the Traverse City fight. Citizens who’ve organized under local green banners are active in the other two.

I did some research over the weekend and documented the following:

In my mind this is one of the important and as yet untold stories of the clean energy transition. The default position for the projects that fail to get permitted or built because of citizen opposition is more coal or more natural gas. And I haven’t even addressed the nuclear issue.

There are a number of ways to cut at this but it’s critical, in my view, to start addressing it in some way. I have lots of ideas about how. I worry that ideology in our ranks is outflanking pragmatism and leadership. The politics of stasis that marred Copenhagen and have taken hold in DC aren’t just about Rush and the G.O.P. and the lack of White House moxie.

In this era of change, swift transitions occurring across all realms are making people so nervous they are more clear about accepting the risks they know than taking a chance with risks they don’t.

One thought on “Grassroots Resistance to Clean Energy Projects”