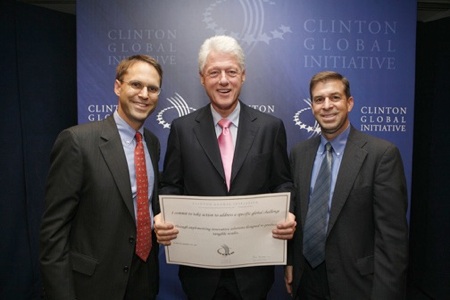 Bob Giles, a son of the Midwest, former Pulitzer Prize winning editor at the Akron Beacon Journal, and then again as editor and publisher of The Detroit News, has been the curator since 2000 of the Nieman Foundation for Journalism at Harvard University. A working newspaper journalist and editor since 1958, Giles knows a thing or two about reporting. He just published a piece in Daedalus, the Journal of the American Academy of Arts and Sciences, on the future of online journalism. The article cites Circle of Blue, the Traverse City-based online multi-media news organization, as a prime example of the “news-gathering experiments that are changing the face of journalism.”

“As journalism quickens the pace of its move to the Web, Circle of Blue is filling a niche by providing specialized content that is considered essential by an audience of shared interests but that can’t be found in such detail anywhere else,” Giles writes. “In many ways, it is reflective of a shift in how we define journalism, or at the very least, in how we go about producing and sharing it.”

“Some of these new ventures will fail, some will succeed. But the vitality of the start-up culture suggests that if the twilight of newspaper journalism is upon us, a fresh capacity to sustain journalism is charging forward. Circle of Blue is among several non-profit news organizations testing one of the industry’s most-discussed ideas: that serious journalism can be supported with funding from a variety of sources behind carefully constructed firerewalls built on traditional standards of journalistic ethics. It is a prototype of a business model that supports specialized coverage, but it in fact embraces characteristics common among other start-ups and experiments that hold promise as a new way of paying for serious journalism.”

Giles’ article, thoroughly reported and stylishly structured, aptly captures the resolve and excitement gathering around serious independent online journalism. Stephen Engelberg, a friend and former colleague at the New York Times,  who helped win a number of Pulitzers in New York, just won another with his colleagues at Pro Publica, the first online Pulitzer ever awarded.

Giles is right on target in citing Circle of Blue as an especially effective model of what is possible in the new online reporting space. Next week J. Carl Ganter, Circle of Blue’s director and co-founder (with his wife Eileen) convenes a strategic planning and design session in San Francisco with a group of creative people he’s met from around the nation and world. The two-day session, facilitated by The Value Web, is intended to take Circle of Blue’s multi-media news desk to a new level of engagement, innovation, and effectiveness.

And that’s saying something. Since its founding in 2002 as an online newsroom covering the global freshwater crisis, Circle of Blue has dispatched multi-media news teams to cover some of the world’s most important water stories on five continents. It’s gathered journalists, scientists, and designers to produce probing reports that have made it the single most important source of breaking news about freshwater issues in the world. It’s done so with the highest standards of reporting, writing, design, photography, videography, and motion graphics.

Still, the real miracle of Circle of Blue, an aspect that wasn’t reported in Daedalus, is that Circle of Blue has produced its work, established new dimensions in multi-media environmental journalism, and influenced important global organizations like the World Economic Forum, on an annual budget that has never exceeded $250,000. Funders span the horizon, from a small New York family foundation to MolsonCoors.

For three years I’ve served as senior editor, writer, and producer at Circle of Blue, working a few hours a week under an agreement with Carl and Eileen. My roles also include fundraising, strategic advisor, outreach staffer, and occasional trip planner. I’ve joined Carl on Circle of Blue reporting  and development trips to Sydney, Stockholm, San Francisco, New York, Washington, Denver, and Aspen. (That’s Carl (l) and me (r) in the pix up top with Bill Clinton at the Clinton Global Initiative in 2007.)

Every month that passes Circle of Blue draws closer to gaining that major foundation grant that scales up the news desk and enables Carl to finally build, in Traverse City, what he calls “the newsroom of the future.” Bob Giles’ piece in Daedulus is the latest sign that the moment is drawing ever closer.