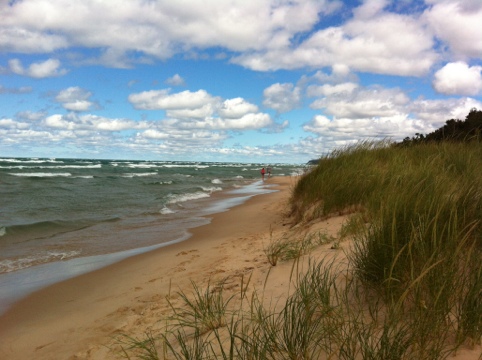 Over at Circle of Blue, we’ve spent much of the year reporting on the transition occurring in the Great Lakes as a result of changes in climate and energy markets. The newest article, on shifting water levels and the Great Lakes port and transport sectors, posted here today.

On average, two big ships call every day at the docks of this Lake Erie city. The route to one of the busiest ports in the Great Lakes follows a 34-kilometer (21-mile) ship channel, which starts well out in Lake Erie, runs past the Maumee River delta, and ends 11 kilometers (seven miles) upstream. To ensure the ships do not scrape the bottom of the shallow port at the mouth of the silty Maumee, the U.S. Army Corps of Engineers annually dredges 700,000 cubic meters (900,000 cubic yards) of mud and sand from the channel, or 1 million metric tons a year.

Port Planning in Era of Climate Change
“We’re not in the business of speculating about climate change or its causes,” said Glen Nekvasil, vice president of the Lake Carriers Association, the trade group of U.S. flagged vessels, which is based in Cleveland, Ohio. “We’re just seeing a lot of variability in water levels, and it affects our operations.”

On Tuesday morning next week, August 21, Circle of Blue hosts a conference call with the media and citizens to discuss the findings of the new Great Lakes report. Join us by signing up here:

Meanwhile, the effects of climate change and erratic weather appear to be eroding infrastructure at big ports, and influencing waterborne transport as Great Lakes water levels drop. Sediment levels are increasing. Ships carry lighter loads. Docks and other infrastructure are decaying. A wealth of new science also is revealing disturbing trends about the effects of warming air and water on the intensity of storms, ice cover, erosion, stormwater overflows, sea lamprey reproduction, and other events.

Join our interactive conference call with Circle of Blue’s director, J. Carl Ganter, myself, and three prominent Great Lakes authorities, to ask questions, learn more, and sort out seminal trends that are shaping the Great Lakes.