Late in July 2008, when gas prices broke $4.00 a gallon for the first time and when the “drill baby drill!” chant was first heard at John McCain rallies, I flew to Barack Obama’s campaign headquarters in Chicago. The mission: to rally support for Obama’s clean energy, good jobs message among the leaders of his media team, who were nervous about the political costs of rising energy prices. At the time I was national communications director of the Apollo Alliance, a San Francisco-based non-profit that had helped develop the environmental, economic, and national security rationale for pursuing a new industrial strategy based on developing cleaner home-grown sources of power. 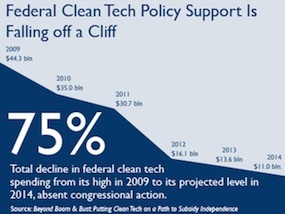 Obama’s team didn’t buckle and the candidate ended up carrying the clean energy message into the White House, where it served as the $100 billion-plus, jobs-producing centerpiece of the $787 billion federal stimulus bill, the American Recovery and Reinvestment Act, that Congress approved in February 2009. Over the next two years, and with the help of the largest federal investment in clean energy in U.S. history, Michigan built a lithium-ion battery sector to power the next generation of electric and hybrid vehicles. Great Plains states joined Texas as important centers of wind power. Nuclear energy returned to the national conversation. Toledo solidified its brand as a solar manufacturing hub. Research universities expanded programs to generate transportation fuels from woody plants and exotic grasses.  States developed their own clean energy investment programs to stimulate entrepreneurs. And tens of thousands of new jobs materialized in companies that specialized in energy efficiency, built blades, turbines, and towers for new wind farms, and contributed material and clean energy know-how.

Dimming Clean Energy Sector
It was a heady time for the sector that is now entering a new, and more uncertain phase. As the 2012 presidential campaign gathers momentum, the nation’s clean energy economy is slowing. A new report issued today by a five-member team of researchers from the Brookings Institution, the Breakthrough Institute, and the World Resources Institute explains that part of the reason is the rapidly receding influence of federal clean energy investment. Congressionally mandated sunsets on federal tax incentives and loan guarantee programs are dramatically reducing funding for the sector, disrupting markets and planning for new products and installations.

But the authors of the study, Beyond Boom & Bust, also argue that withdrawal of federal support for clean energy initiatives is not necessarily a death sentence.

“Many of today’s existing subsidies and clean energy programs, after all, are poorly optimized, characterized by a boom and bust cycle of aid and withdrawal, or in need of thorough revision thanks to either recent progress in the price and performance of subsidized technologies or the mounting fiscal burden imposed by some programs,” said the study. “The end of the present policy regime therefore offers the opportunity to implement smart reforms that not only avoid a potential ‘clean tech crash’ but also accelerate technological progress and more effectively utilize taxpayer resources.”

“We provide some ideas about how to taper and adjust financial supports in a careful, selective, pro-innovation way as opposed to the kind of brute ‘cut-offs’ some are talking about,” said Mark Muro, senior fellow and policy director at the Metropolitan Policy Program at Brookings, and one of the co-authors. “Ours is a realistic kind of ‘mend-it-don’t-end-it’ approach.”

The report comes amid a torrent of political attention to, and investment in, the nation’s fossil fuel production, the industrial sector that clean energy was gradually supposed to replace. Just five days ago, for instance, President Obama issued an executive order to speed the development and heighten the safety of drilling for natural gas in the nation’s deep shale reserves. The shale gas boom, which has lowered prices and disrupted markets for clean energy, offers an object lesson in the sort of long-term, stable, and committed federal policymaking and investment for clean energy that the authors of Beyond Boom & Bust recommend.

A good portion of the technical knowledge and financial support that the energy industry needed to tap shale reserves came as a result of a very generous tax credit approved by Congress in 1980 under Section 29 of the Internal Revenue Code. The Section 29 unconventional fuels tax credit provided energy companies with incentives to develop the drilling and production technologies for hard-to-tap gas-saturated geological layers. In Michigan, for instance, the Section 29 credit spurred the development of the Antrim shale, the first big shale play in the country, which lay beneath much of the state’s northern lower peninsula. Most of the 9,100 Antrim wells drilled in northern Michigan qualified for the credit.

Object Lesson – Section 29 Tax Credit for Gas Producers
The credit also prompted development of other shale reserves around the country because it allowed energy producers to subtract from their federal taxes $1.02 for each thousand cubic feet of gas produced. Any well drilled in the Antrim formation, or in other shale and coal seam gas reserves across the country before December 31, 1992, qualified for the credit. The lucrative tax write-off did not expire until December 31, 2002. Initially, Congress estimated that the total cost of the Section 29 credit would be $500 million to $1 billion over 22 years. The subsidy, however, cost taxpayers $10 billion before it ended, according to the U.S. Treasury Department.

In reporting on the 92 distinct federal policies and programs supporting the clean energy sector from 2009 to 2014, the authors of Beyond Boom & Bust make clear that there is nothing comparable to the big and long-term Section 29 credit to encourage deployment and operations for wind, solar, geothermal, or any other clean energy source. In fact, just the opposite is true. The  clean energy investments contained in the federal stimulus bill are now entering a state of what the authors say is a “policy collapse.” In 2009, according to the report, the U.S. spent $44.3 billion on clean energy. This year, federal spending in the sector will fall to $16.2 billion. By 2014, spending will be $11 billion.

“Without timely and targeted policy reform, several sectors are likely to experience more bankruptcies, consolidations, and market contraction ahead,” said the study.

The report’s authors — who also include Letha Tawney of the World Resources Institute; and Jesse Jenkins, Ted Nordhaus, Michael Shellenberger, and Alex Trembath of the Breakthrough Institute — recommend altering federal clean energy policy to stress innovation, research, development, and deployment of the best practices and equipment.

Adjustments Needed
When subsidies are necessary, they need to be durable enough politically — like those for the fossil fuel sector — in order to provide what the report calls “sufficient business certainty.” The wind energy industry, for instance, is now fighting for its life because the production tax credit that supports it has always been temporary, and is due once again to expire at the end of the year.

“The issue, as we show, is much broader than the narrow question of what happens to the production tax credit  for wind later this year,” said Muro.  “The report raises the issue of whether the U.S. is about to abdicate any role on fostering advanced energy.”

One of the big market drivers that the government should consider, say the report’s authors, is establishing performance-based standards for clean energy, similar to the higher fuel-mileage standards set by the Obama administration. Those standards require automakers to build fleets that average 54.5 miles per gallon by 2025. The fuel mileage requirement is already influencing vehicle designs and markets, enhancing the bottom lines of auto companies, providing consumers with more choices, and reducing consumption of gasoline and diesel.