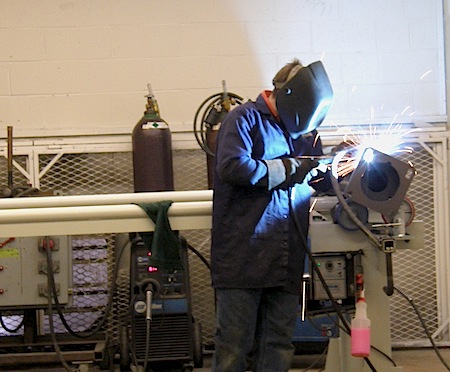 MANISTEE, MI – Every half-century or so since its founding in 1841, this stubborn Lake Michigan port city, which cut hardwood for lake steamers in the 19th century and built parts for Detroit carmakers in the 20th, has endured the optimistic surge and demoralizing retreat of economic transition. Last month, on the kind of cold, wet, early spring day that makes residents question their allegiance to northern Michigan, Manistee latched onto what it believes is the next era of industrial opportunity, a future built quite literally out of thin air.

On April 20 some 500 people, including Michigan Governor Jennifer M. Granholm, welcomed to town Mariah Power, a Reno, Nevada-based manufacturer of small-scale wind turbines meant for homes and businesses. Mariah, in cooperation with MasTech, a Michigan manufacturer of machining equipment, is building its Windspire line of electrical generating turbines in a 30,000-square-foot plant that currently houses 40 full-time workers, a number that will likely exceed 100 by year-end.

The opening of the Mastech and Mariah turbine plant is the latest example of Michigan’s newfound ability to generate industrial activity and manufacturing jobs in the clean energy sector. A state employment study issued this month found that 70,000 residents, or just over 2 percent of the state workforce, are employed in clean energy industries and earn more than the average state salary of $42,000.

Michigan Counts New Clean Energy Jobs
The report, commissioned by the state Department of Energy, Labor, and Economic Growth (DELEG), also closely surveyed more than 300 companies in the sector and found that many of them started up in the last three years, a much higher rate of entrepreneurism than existed in any other industrial sector. Those companies added 2,500 jobs from 2005 to 2008, an increase of 7.7 percent, while overall job numbers in Michigan during the same period fell 5.5 percent.

“These two companies are combining to provide the next generation of clean, renewable energy to our nation,” Governor Granholm told the audience gathered in Manistee. “This sweet spot right here is a renewable energy system, a small wind system that can be installed in people’s homes and businesses. What the Windspire is doing is a homerun for us. It’s a homerun because individuals will be able to generate energy, make money and save money on energy bills.”

The new Mariah Power plant is a microcosm of what appears to be a much larger trend in clean energy manufacturing in Michigan and other industrial states. It is a trend that the Apollo Alliance has long anticipated. In 2004, the Apollo Alliance published New Energy For America, which argued that significant federal investments to scale up clean energy would produce millions of new jobs, many of them in manufacturing. Last fall, in The New Apollo Program, a comprehensive national economic development strategy, the Alliance asserted that a $500 billion federal investment in clean energy development would generate 5 million new jobs.

Both studies proved to be persuasive in the White House and Congress, which in the last three months approved the American Recovery and Reinvestment Act, an appropriations bill, and a budget plan that, combined, invest nearly $350 billion in clean energy development. The surge of spending is meant to sharply accelerate demand for wind, solar, and geothermal equipment and systems; next generation batteries for the auto sector; supplies and tools for energy efficiency; and parts and equipment for public transit.

Still, as the Apollo Alliance asserted in April when it proposed the Apollo Green Manufacturing Action Plan, economic gains from the nation’s transition to clean energy will only take root if we ensure that the parts, equipment and systems of the clean energy economy are made in American factories by American green-collar workers earning good wages and benefits.

Stanley “Skip” Pruss, the DELEG director, told the conference that the industrial transition under way in Michigan will lead to new prosperity. He noted that by next year Germany will have more people employed building wind turbines than automobiles in a country noted for its Volkswagens, Audis, Mercedes and Porsches. Spain, he said, has become a world leader in manufacturing and deploying wind and solar equipment to power entire regions of that country. “Michigan has every resource and tool necessary to compete in this global clean energy market,” he said.

Kate Gordon, co-director of the Apollo Alliance and a national authority on clean energy policy and manufacturing, noted in her remarks that when it comes to making wind, solar, geothermal and other clean energy equipment, Michigan and the United States were not competing against low cost producers like China or Thailand.

“We’re competing against Germany and Spain and Denmark, where wages and benefits are good and labor standards are high,” Gordon said. “Those countries have comprehensive industrial policies that spur renewable energy development. They pass laws that increase demand. Then they invest in their workforce training system and in helping their factories retool and purchase state of the art equipment.”

Leaders Assert Michigan Can Compete
The big question for Michigan is not whether state manufacturers are capable of outfitting the clean energy sector. It’s whether they get the chance. Michigan’s political and business leaders acknowledge that the state was not as nimble as European nations or some other states – California, Iowa, Massachusetts, Minnesota and Pennsylvania in particular — in recognizing and responding to the expanding national and global markets for renewable energies and next generation vehicles.

But those same leaders now assert that Michigan’s manufacturing prowess, its vast wind, fresh water, and farm resources, and its location at the center of the Great Lakes shipping lanes will enable it to compete in a range of clean energy industries. The Department of Energy last year identified Michigan as one of the prime locations in the country for building and using wind turbines to generate electricity.

Indeed, Gordon told the conference attendees, the real promise of the clean energy economy is to revive manufacturing and rebuild America’s middle class is in the industrial states of the Heartland, which have borne the brunt of the economic crisis, and where much of the equipment and many of the new industrial products could be designed and manufactured.

The sudden proliferation of clean energy companies in Michigan confirms Gordon’s optimism. In the Upper Peninsula, Mascoma will employ up to 400 people at one of the nation’s first cellulosic ethanol plants to convert wood waste to fuel. In the Detroit region, a new lithium ion battery manufacturing corridor is forming for automakers as they ramp up production of ultra-fuel-efficient plug-in hybrid electric vehicles.

Almost all of the new development reflects a convergence of new market opportunities and Michigan’s hard work over the last three years to realign its industrial strategy to take advantage of a renewable energy standard for utilities, and new tax breaks and state grants designed to recruit wind, solar, electric vehicle, biofuel and battery manufacturers.

Course Correction
It seems to be working. In the last three years, more than 35 firms in Michigan have sprung up or retooled their factories to supply parts to the commercial wind industry, according to the Michigan Economic Development Corp, a state agency. Some 400 other Michigan manufacturers have the capability to craft gear boxes, brakes, generators and other parts for utility-size wind turbines that sell for $2 million or more each, says NextEnergy, a renewable energy development group in Detroit.

Dowding Industries, an auto supplier-turned-turbine parts manufacturer in Eaton Rapids, opened a new plant in August to build turbine parts — hubs, transmissions and bases — for Clipper Windpower, a turbine maker, said Jeff Metts, the company’s president. “I’m tired of inventing stuff here that is made in other countries,” he said earlier this month. “I can’t tell you how fed up I am about that.”

Global Wind Systems, a final assembly plant for delivery-ready commercial wind turbines, will ramp up production this year in Novi, near Detroit, after receiving $7.3 million in tax credits. The company plans to hire 250 workers by the year’s end.

Hemlock Semiconductor, a joint venture that includes Dow Corning, is building a $1 billion polycrystalline silicon plant near Midland that will employ 300 people to produce materials for the solar industry. Michigan’s third largest wind generating farm, with 60 utility-scale windmills, just opened in the Thumb region north of Detroit. Some 15 other industrial-scale clean energy manufacturing and development projects have been announced in Michigan over the past 14 months. The new ventures will generate nearly 3,000 jobs.

Meanwhile Other Manufacturing Takes A Beating
All of this momentum comes amid the economic tumult in the auto industry that forced Chrysler into bankruptcy, is pushing General Motors to the same fate, has dramatically reduced per capita income, and has heavily contributed to Michigan’s 12.9 percent unemployment rate – the highest in the nation. Since 2000, according to the U.S. Census Bureau, Michigan has lost over 800,000 jobs, more than half in the auto sector. The state has endured eight straight years of job losses, the most since the Great Depression. Public school districts across the state – rural, urban and suburban – report steadily declining enrollment. Michigan and Rhode Island are the only two states that are losing population, according to the Census Bureau.

Crisis, though, often produces opportunity, and that is the case in Michigan’s transportation sector. Governor Granholm and the Legislature vow to make Michigan the global center of electric vehicle production. The state has already invested $700 million to recruit manufacturers of lithium ion batteries. Michigan Senator Debbie Stabenow convinced the White House and Congress to include $2 billion more in the American Recovery and Reinvestment Act for lithium ion battery development, and she is using her influence to direct much of that investment toward Detroit.

The auto industry is responding. General Motors is building a $30 million plant in southeast Michigan to build the storage assemblies for its Chevy Volt plug-in hybrid, though the batteries are now made in South Korea. Earlier this year, A123 Systems, a Massachusetts-based battery manufacturer, said it hopes to build a 7-million square foot factory in Michigan to produce energy storage systems for plug-in hybrids and hybrid-electric vehicles. At full capacity, said the company, the plant could employ 14,000 people.

Little Plants Matter
Yet, even as Michigan goes all out to recruit the big plants, it also celebrates the small ones like the Mariah-MasTech partnership in Manistee. The new plant represents a nearly $2 million capital investment for the city and the northern Michigan region.

Three quarters of the more than 200 Windspires manufactured each month in Manistee, from American-made aluminum and steel, will be sold in Europe. Mike Hess, Mariah’s chief executive officer, says electricity is two or three times more expensive in Europe than in the United States. “People want these generators to supply electricity and lower their costs,” he said.

At full capacity, 140 people will earn decent wages for northern Michigan — starting pay is $12 an hour with benefits — to build the $5,000 Windspires, which are capable of generating half of a home’s electricity supply. Moreover, according to state labor authorities, the Mariah plant will produce dozens of secondary jobs in the state.

For example, several of the parts for the Windspire are manufactured by Michigan Tool Works in Sturgis, Michigan, a center of tool and die production near the Indiana border. The contract to make safety rings, struts and clamps prompted Michigan Tool to hire two new part-time and two full-time employees.

And Plex Systems, Inc., a software developer from Auburn Hills, is providing the manufacturing and management software that will enable Mariah Power to oversee its Manistee-based operation from its Reno headquarters or anywhere with online access.

“I can’t tell you how excited I am about what is happening with clean energy in Michigan,” said Gov. Granholm. “We are leading the way in our new energy economy by providing a welcoming environment to innovative, green companies.”

Biomass Gets Traverse City Go Ahead