CANTON, Oh. – Orders for steel from domestic and export markets plunged so low in May 2009 that the Timken Company’s mill here on Faircrest Street operated for just four days that month. Nearly three years later, with demand for steel soaring and the Faircrest mill operating around the clock, Timken started construction in early March on a $200 million, 83,000-square-foot addition to boost the plant’s production.

Just as Ohio’s presidential election has accurately predicted the winner since Lyndon Johnson was in the Oval Office, the condition of Ohio’s steel sector is a useful state and national economic indicator. The Ohio steel industry, led by a drilling boom in the gas and oil industry, and reviving demand for cars and light trucks, is growing again.

“The need for specialty steel, much of it for oil and natural gas producers, is high in the United States and around the world. We see demand in that market continuing to be healthy for quite some time,” said Salvatore J. Miraglia Jr., the president of Timken’s steel group.

Last month I visited Ohio to report for The New York Times on the consequences of the oil and gas boom to Ohio’s steel industry. This article is the draft that I sent the Times, which published the article today.

Timken’s new building, which will rise 26-stories from its base 80-feet below the surface, will sharply expand the plant’s capacity to cast steel billets to be made into parts for drilling platforms, heavy equipment, and other oil and gas industry tools. Two other new buildings also are underway at the 27-year-old mill – a  $35 million, 13,000-square -foot addition to house a new forge press, and a $25 million 14,600-square-foot installation for adding to molten metal the minerals and other compounds that add strength to finished steel.

Across Ohio, other steel manufacturers also are expanding operations. In October United States Steel opened a $100 million, 325,000-square-foot mill at its Lorain plant to manufacture steel pipe for the drilling industry. Vallourec & Mannesmann, a French manufacturing company, is completing a new $650 million, 1.1 million-square-foot steel pipe mill in Youngstown, and is building a separate $57 million, 200,000-square-foot mill nearby to add threads to the pipes. Both plants serve the oil and gas sector.

“We haven’t had this kind of expansion in steel since the 1980s,” added Eric Burkland, the president of the Ohio Manufacturers’ Association. “It’s a tremendous turnaround.”

All together, the new production projects account for nearly $1.5 billion in spending on construction and equipment in Ohio’s steel industry, and over 2 million square feet of manufacturing space. When all the projects are completed later this year and next, the four plants alone will add roughly 630 new manufacturing jobs and are likely to help shrink Ohio’s jobless rate, which was 7.5 percent in March. That is below the 8.2 percent U.S. rate, and down from a statewide peak of 10.6 percent in July 2009.

The projects also will help Ohio’s steel sector, the nation’s second largest behind Indiana, to exceed the annual production — 14 million to 15 million tons – achieved in the years prior to 2009 when production dropped to 4.8 million tons, and investment in plants was just $166 million, according to the Ohio Steel Council, a state trade group.

One reason for the industry’s revival, said Mr. Burkland, was anticipated: the recovery of the auto industry. “People feel more confident and they are buying cars again,” he said.

Auto Industry Revives
The national auto sector, a big buyer of steel, is expected this year to deliver 13.8 million cars and light trucks, and could reach 14 million to 15 million deliveries by 2014, according to monthly sale figures and industry estimates. Industry sales peaked at 17 million in 2005, but plunged to 10.9 million sales in 2009 in the heart of the Great Recession. The Ohio Department of Development, in a February 2011 report, said 72,000 people are employed in the state’s car and light truck vehicle assembly plants, and dozens of parts manufacturing plants.

But the huge surge in oil and gas drilling in the U.S. and the swift rise in the market for steel pipes and oilfield equipment, has come as a surprise. The clanging of long lengths of steel pipes being heated and cooled, pounded and straightened inside United States Steel’s Lorain Tubular Operation’s new pipe finishing plant provides a rare inside view of the industry’s revival in Ohio.

The bright lights and charged furnaces, the powerful hiss of cold water on hot steel, and the jarring din that makes ear plugs mandatory safety equipment, describe a company and an industry leveraging investments few thought possible only a few years ago.

“We’re shipping pipe to drillling operations in Pennsylvania, North Dakota, Texas,. China. All over the country. All over the world,” said John Wilkinson, the plant’s interim manager. “Some of it is being used here in Ohio.”

New production practices have made it practical to tap the dense and deep hydrocarbon-rich shales that lie beneath much of the Great Plains, Gulf Coast, Rocky Mountain West, and mid-Atlantic states, and they are being tapped at a frantic pace. Last year, according to the Department of Energy’s Energy Information Administration, the number of oil and gas drilling rigs in operation across the U.S. reached an average of 1,876 a month. That is the highest rig count since 2008. More than 45,000 oil and gas wells were drilled in the U.S. in 2011, and a third of the nation’s natural gas is generated from shale.

Beneath 17,000 square miles of eastern and central Ohio lie two layers of deep gas and oil-bearing shale, the Marcellus and the Utica. Some $3 billion, according to the Ohio Department of Natural Resources, is being spent in Ohio now on drilling and production, processing, transport, steel plant expansions and other supply chain manufacturing to serve the fossil fuel sector.

Lots of Steel Drilling Pipe
It takes a lot of steel to tap reserves that generally lie a mile or more beneath the surface. Each of the 4.5 -inch diameter, 50-foot long drilling pipes rolling off the production line in Lorain weighs 850 pounds. Drilling vertically to the depth of the shale in Ohio, and horizontally through it to tap gas and oil typically takes 2,000 to 2,500 lengths of pipe or some 100 tons of steel.  As of April 8, Ohio had issued 207 shale drilling permits. Early production results indicate Utica wells are capable of producing millions of cubic feet of gas and 500 barrels of oil daily.

Thousands more deep shale wells are expected in Ohio, perhaps as many as 1,600 new wells a year by 2015, according to the Ohio Oil and Gas Energy Education Program, an industry financed research and education group.

David Mustine, the general manager of JobsOhio, a state economic development group, points out that natural gas is a favored fuel for heating steel and that the new supplies are lowering prices, and saving steel plants millions of dollars a years. “Drilling for natural gas has given Ohio steel producers a larger market for their products and a competitive advantage on cost,” said Mr. Mustine.

In Canton, Timken executives expect to complete all of the Faircrest mill’s additions by 2014, and production will increase to 925,000 tons annually from 750,000 tons this year.  Mr. Miraglia said 425 people work at the plant and that state-of-the-art automation in the new buildings will likely mean adding few if any new jobs.  Behind  him long billets of steel the color of the sun were being poured, turned, and pounded in a fury of smoke and flame. “This is the largest investment made in this plant since we built it,” Mr. Miraglia said. 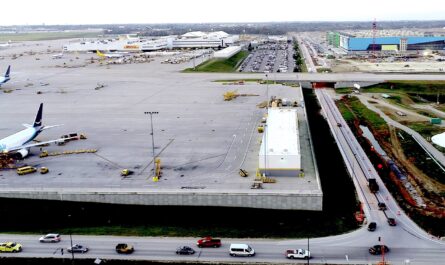