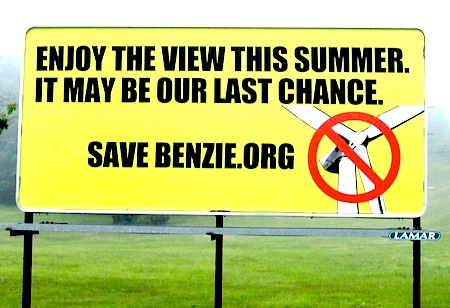 The history of renewable energy, at least the way many in the environmental community imagined it with the election of President Obama, is a straight story line. A courageous young leader, worried about economic and national security, takes on the big energy dogs and begins to shift the United States away from dirty, dangerous, and expensive fossil fuels.

Then there is history the way it actually unfolds. Markets and personal values and incomes and public attitudes and global competition and fate and chance are all shaken together like one of those hand-held snow storms in glass. Things eventually settle but the outcome can be so random.

That’s one way to explain the fierce resistance to a proposal by Duke Energy to build over 100 utility-scale wind generators in four townships in Benzie and Manistee counties. Public opinion polls show broad support for clean and renewable energy development. But individual projects, like Duke’s, are having a harder time getting built than the poll results suggest.

Difference of Wind Opinion
The push and pull is reflected almost weekly in the Benzie County Record Patriot. “We are being given an opportunity to help preserve what we have here and show the rest of the world we are willing to take a stand in the fight against pollution,” writes Emily Nugent, a recent college graduate raised in Benzie County who noted she was dismayed by the anti-wind signs and billboards (like the one pictured above in Frankfort). “I thought our community has been in support of taking care of our environment, not opposed to a greener way of life.”

“It is not sound green energy policy to substitute one form of pollution for another,” counters Michael Connolly, a resident of Arcadia, a Lake Michigan coastal village in Manistee County that is a hotbed of opposition to the Duke plan. “What is the gain to substitute reliance on fossil fuels for another form of aesthetic/visual and possible health risk pollution.”

Glenn Puitt of the Michigan Land Use Institute has been covering the issues and his latest piece on leasing is worth reading.

In the balancing of the actual risks of coal-fired generating stations and the perceived hazards of wind power it just seems so obvious which way the scale tilts. Coal mining kills, pollutes streams, wrecks mountaintops, tears apart prairies, and depletes water supplies. Coal combustion produces mercury-loaded emissions that contaminate lakes and enter the food chain. And carbon from coal-fired plants in the U.S., China, and other nations is the principal source of climate changing emissions.

Wind power, meanwhile, can be a threat to birds and bats, can produce an irritating flicker at some points on the ground during specific hours of the day in certain parts of the year, and is generated atop tall towers that some see as such a visual blight they worry that tourism revenue and property values could decline.

Risk Perception Impedes Clean Energy Development
Nevertheless, perceived risks of wind power and other renewables are proving to be powerful drivers of public sentiment here in northern Michigan and around the country. Developers are having a hard time getting new clean energy projects built.

Though a handful of new biomass plants came online in 2010, principally in the southeast states, a number of others — including one in Traverse City — also were cancelled due in part to financing problems and what Renewable Energy World, a trade news organization called “increased scrutiny by environmentalists and regulatory agencies.”

Last year just one company, Nevada based Ormat Technologies, brought a new geothermal power plant online, a 15MW plant in Jersey Valley, Nevada, according to the 2011 Annual U.S. Geothermal Power Production and Development Report. This in a generating sector that had developed over 3,000 megawatts of capacity in previous years.

But it also appears clear that wind energy development will not come close in 2010 and 2011 to matching the 18,400 megawatts of new generating capacity built in 2008 and 2009. To some extent this reflects uncertainty in financial markets and government support. But it also is the result of resistance at the grassroots to big projects. Realtors in Wisconsin, for instance, support Governor Scott Walker’s proposal to restrict wind development in that state.

Of all the renewable alternatives only solar photovoltaic energy appears to be holding its own, especially for photovoltaic systems installed on home and business rooftops. The residential market doubled last year, according to the Solar Energy Industries Association. Utilities also opened three concentrated solar power plants, though green groups on the  West Coast are nervous about the big solar projects planned for deserts in California and the Southwest. They say the big plants, which cover hundreds of acres, can harm the land and wildlife.

Meanwhile Hydrocarbon Boom At Continent’s Center
What is clear today is that while Americans battle over clean energy projects. stunting green development, climbing gas prices serve as a daily reminder of just how strung out on oil this country is. The fossil energy industry is flexing its muscles in government and the finance community, winning permits and billions in cash to perpetuate the age of fossil fuels. The result is one of the grandest industrial expansions in recent decades, much of it at the center of the continent.

North American, Asian, and European companies are spending $15 billion annually to turn tar sands into oil in northern Canada; $7 billion annually to drill shale oil wells on the northern Great Plains; $30 billion to build a pipeline network for transporting tar sands oil, shale oil, and natural gas between Canada and the U.S. through the center of the continent, and to the Texas Gulf Coast; and $22.6 billion to expand and modernize refineries in the Midwest, Great Plains, and Gulf of Mexico. (See list of pipelines and refinery expansions below).

A Canadian tar sands developer  wants to open a new tar sands mines in Utah , and as of 2010, North Dakota is the fourth-largest oil-producing state in the nation-quickly heading to number two, behind Texas.

Production started up in 2009 and continues. Unfortunately, the sources of that fuel are more difficult and dangerous to extract and transport, and they carry greater risks of air pollution, groundwater contamination, water consumption, and greenhouse gas emissions than ever before.