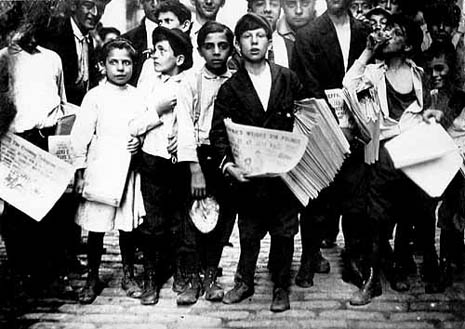 Thanksgiving at my house in White Plains wasn’t just the day that you could hear the trumpets and trombones warming up at the old stadium for the annual high school football game, or when grandmothers and grandfathers from both sides, aunts and uncles and cousins showed up for Mom’s turkey feast. It also was the day that the Reporter Dispatch thumped onto the driveway, a holiday newspaper stuffed with advertisements and inserts.

It’s still that way in some communities. But the ad-stocked Thanksgiving newspaper just like the daily newspaper itself is — in the parlance of the day — a content dissemination platform whose time is fast coming to an end.

Earlier this month IBM Global Business Services published a study based on an extensive survey of 2,400 consumers and 80 advertising executives that predicted 30 percent of the advertising revenue now being spent on traditional media — particularly television and print — will shift online in the next five years. Advertisers, aware of the ability of consumers to get what they want when they want it on the Web, also want their products placed where the consumers are. Advertisers look online to platforms and techniques that enable them to see what’s actually happening in click throughs, time spent on Web sites, time spent viewing and reading, the analytics that mainstream media can’t provide.

As a writer and public policy specialist who made the transition to online journalism and communications in 1998, none of IBM’s findings are surprising. They just confirm what is happening in my world. I spend much more time online working, reading, viewing, communicating, learning, and being entertained than I ever did with any other media. I earn my living reporting and editing online. I’ve developed a nice consultancy building the online capacity of individuals and organizations.  My wife is enrolled in online college courses. My kids spend almost all their free time online, and a lot of time besides that.

But it’s also hard to watch daily newspapers, truly great civic institutions, get hammered by the online transition. What this means for civil society is still playing out. I see it as an opportunity and not a civic tragedy. Still, the near certainty of a day fast approaching when daily newspapers cease to be is producing painful career uncertainty for my friends in the business. Some have joined the thousands who’ve been bought out, laid off, dismissed, and forgotten all over the country.

Nancy Nall Derringer, who spent 25 years as a daily reporter, 19 of them as an editor and columnist in Indiana for the Fort Wayne News-Sentinel, published an essay last year that is among the most perceptive pieces on the subject that I’ve read. Nancy is a newspaper refugee. She lives in Grosse Pointe Woods, Michigan, where she freelances. Her husband, Alan Derringer, is an editor with the Detroit News.

“I think about someone else I’ve been paying attention to lately,” Nancy writes at the essay’s end, “a young Fort Wayne native, Nathan Gotsch. In late spring of 2005, he started a weblog he called Fort Wayne Media Notes. A few months later he changed the name to Fort Wayne Observed (now edited by Mitch Harper) and widened the focus accordingly. Like most blogs, he started out slow and tentative, linking to published reports and adding a few comments. Soon, though, he was finding and breaking stories – not every day, but often enough that you wanted to check the site daily, just in case. He had a fresh and clear writing style, an eye for a story and obviously knew how to cultivate sources. Plainly, he understood the Internet. And he was unemployed, in the ebb tide after college graduation. In other words, he was the sort of bright young man a newspaper editor should be wooing with candy and flowers. It so happens that as a film school grad, Gotsch was more interested in making movies in Hollywood than journalism in Fort Wayne.”

One thought on “Saying Goodbye To Thanksgivings With Newspapers”