MANILA — Valentino de Guzman, the energy campaigner for the Philippine Movement for Climate Justice, guided me to Mariveles to interview leaders of Limay Concerned Citizens. Guzman, a well-educated activist, once taught college level math before joining the Philippine climate justice movement. The citizens group on the Bataan Peninsula, across Manila Bay from the capital region, has been protesting the air pollution and disruption to their groundwater reserves caused by SMC Consolidated Power Corporation. The company’s 600-megawatt coal-fired power station is under construction along the Manila Bay shoreline in the community’s backyard.

On the way to Limay — a village of packed dirt, shade trees, and clustered homes — Guzman briefed me on the situation that the Philippines and much of the rest of southeast Asia faces. Government campaigns to build coal-fired power plants, and import most of the fuel from Indonesia, are running straight into the global energy revolution. Solar powered electrical generation is cheaper, easier to build, and prompting far less social resistance than coal-fired electricity. India is shifting to renewables. So are China, the United States (despite the Trump administration), and Europe.

In some communities, Guzman said, public resistance is so keen that the plants are not likely to be finished. In other instances, companies and the government are reappraising the cost of building coal-fired plants relative to solar, which currently accounts for scant generating capacity in the Philippines.

Environmental resistance is dangerous. More Philippine environmental activists have been murdered over the last decade than in almost any other country, according to Global Witness, a London group that compiles an annual report.

The situation in Limay is emblematic of most of the frontline struggles. The ten men and women waiting for me around a big communal table in the shade of a pitched roof described their frustration with the new power plant. Fly ash from preliminary operations contaminated the soil, and their gardens were no longer were productive. People were coming down with strange skin ailments. Some neighbors had respiratory illnesses.

One of the leaders of the anti-coal movement on the Bataan Peninsula was Gloria Capitan, president of United Citizens of Lucanin Association, a community that has been peacefully opposing the operation and expansion of coal plants and open coal and ash storage facilities in the Mariveles region. Auntie Gloria, as she was known, had focused her work on a big ash storage pile on a coal loading dock along the shoreline in her community. Ash from the pile was causing respiratory difficulties and dirtying the homes of nearby residents.

Capitan was gunned down on July 1, 2016 by two men on a motorcycle. The murder occurred at Capitan’s roadside store and bar near Mariveles. Capitan’s eight-year-old grandson was grazed by a bullet. Like so many other killings of activists around the world, the police have no suspects.

The Philippine and local governments had paid some heed to the resistance. The coal ash pile that Gloria Capitan opposed was enclosed in an immense metal building soon after her murder. Not far away, due to activism from Limay Concerned Citizens, their village’s water supply was switched from groundwater to municipal water. In December 2016 and January 2017, the Department of Environment and Natural Resources, then led by activist Gina Lopez, served SMC with notices of violation for haphazard fly ash management and for air pollution. SMC said it would send doctors to Limay and would stop dumping ash. The doctors never showed up, said the citizens group, but the ash dumping did stop. 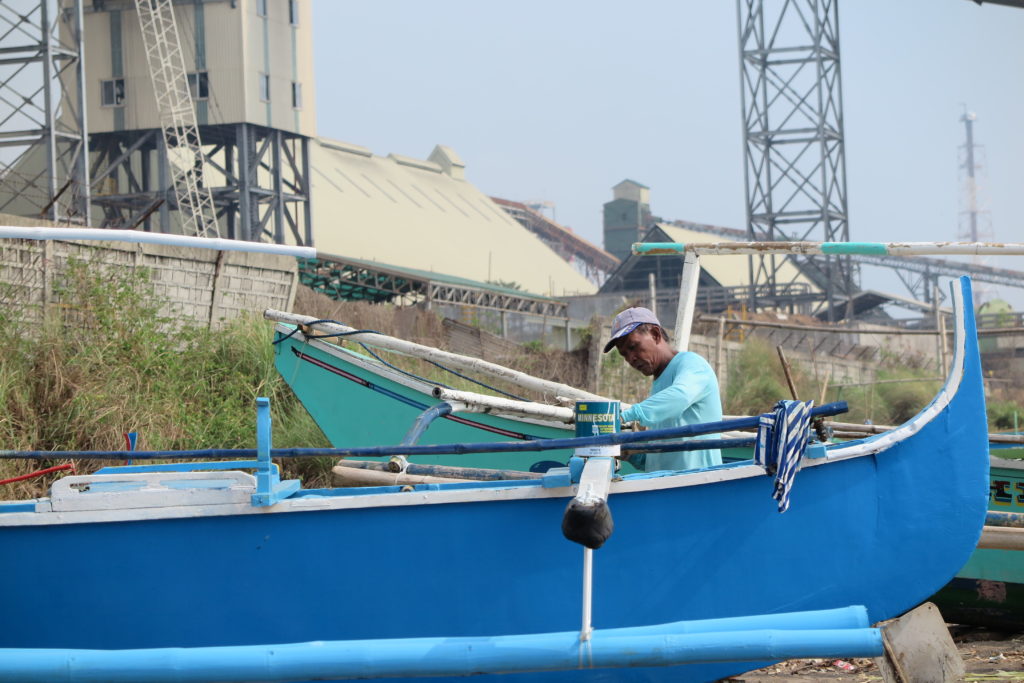 All over the world, and across much of the Philippines, activism at the frontlines of fossil energy development is this engaged and determined. Some 400 people are members of Limay Concerned Citizens, which means most of the village’s adults belong. Their work is a study in tenacity and sincerity, though public interest breakthroughs are rare. SMC is a big and influential industrial company backed by Philippine energy policy. When I visited, the company was preparing to start commercial operation of its first 150-megawatt unit. Three other units were in various stages of readiness and construction.

What was plain is that Limay Concerned Citizens had capacity to push the company and sympathetic regulators to improve operations. The plant, though, was not going away. The fishermen, shopkeepers, mothers, and activists gathered around the table understood that reality. They weren’t going away either. They wanted a foreign journalist to tell the world of their resolve.