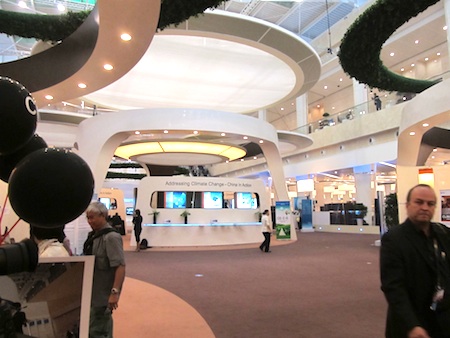 TIANJIN, China – This industrious nation’s allegiance to construction projects of massive scale is as familiar to the world as the 2,500-year-old, 5,500-mile Great Wall of China, which protected the country’s northern frontier, and as imposing as the wide moats and towering red stone walls of the 600-year-old Forbidden City at the heart of Beijing.

Still, international visitors attending China’s first U.N. climate change conference are struck by the immensity of the brand new polished marble and glass Meijiang Convention and Exhibition Center, the site of the meeting, and the intensity of the retail, commercial, and infrastructure construction occurring outside its hangar-like entry.

Spanning 2.47 million square feet and soaring to interior heights of 10 stories, the exhibition center, which resembles the Trade Federation’s shining headquarters in the Star Wars films, is easily large enough to house a small fleet of transoceanic jetliners. It opened in September following just eight months of construction. The building is so new and was constructed so quickly that the center does not appear on the city’s newest maps, which memorialize the small lakes and wetlands wrecked by its presence.

Meanwhile, flanking the brand new 10-lane boulevard out front are dozens of construction cranes, sprouted like dandelions atop the steel skeletons of residential and commercial towers under construction.

The speed and scope of the development here, and in dozens of other Chinese cities, is visible evidence of the breathtaking economic expansion that in a generation has pulled 400 million Chinese from poverty into the middle class. At all times of the day and night, Tianjin’s restaurants are full and its noisy streets are a tangle of walkers, bikers, and drivers. China’s economic development ministries consistently state that they anticipate growth to continue apace, and by 2020 the economy will be 60 percent larger than it is today.

This week, in a number of side events, including one sponsored on Tuesday by the U.S. Climate Action Network, several of China’s leading environmental scientists and technical specialists are describing the consequences of reaching that goal to the work of taming the warming climate. But there are other effects, too, on China’s natural resources, particularly on the already scarce reserves of fresh water. In almost every instance, the conclusions are enormously troubling.

A Future Built on Coal
Lying at the other end of China’s surging economic expansion is a powerful engine fueled principally by coal. This nation, the world’s largest coal producer and consumer, will mine 3.15 billion tons of coal, three times more than the United States, according to the International Energy Agency. The result for the atmosphere is that China this year will add 6.3 billion tons of climate changing carbon emissions, the most of any country, according to the Energy Information Administration, a unit of the U.S. Department of Energy.

China understands its dilemma and is diversifying its energy portfolio. The country has 11 nuclear plants generating 11,000 megawatts and the government’s goal is to add 60,000 to 75,000 more megawatts by 2020, or roughly 60 to 70 new nuclear generating units. The nuclear expansion is a feature of the country’s plan, announced in July to spend $738 billion over the next decade on “alternative energy development,” which also includes biomass, wind, solar, and natural gas from deep carbon bearing shales.

Moreover China has already built 4,000 miles of high speed rail, including the 205 mph bullet train between Tianjin and Beijing, and plans to build 6,000 more miles. It has developed policies to improve buildings, construct eco cities, and save energy.

Yet according to a range of estimates by authorities in and outside China, coal production and consumption by the end of the decade will still reach 3.5 billion to 4.5 billion tons.  China announced last year at the Copenhagen climate summit that it would cut the “carbon intensity” of its emissions 40 to 45 percent by 2020, meaning it would reduce the amount of carbon needed to generate a dollar of growth. The world welcomed the commitment, the first time China ever bound itself to any emissions limits. Its representative here say they are meeting the goal.

But the Natural Resources Defense Council, in a new report that looks at various scenarios of economic growth and China’s ability to diversify its energy sources, still projects that China’s carbon emissions will essentially double by the end of the decade.

When asked about this, Jiang Kejun, a director of research at the Energy Research Institute, a unit of the National Development and Reform Commission, shrugged and then said in an interview, “There’s disagreement about how much coal will be produced. We project that coal production will peak by 2020 at 3.4 billion tons.”

The effect of China’s surging growth in coal production has even more dire consequences for the nation’s water supply. “People outside China talk about emissions,” said Fuqiang Yang, director of the World Wildlife Fund’s Global Climate Solutions project in Beijing. “Inside China, water is the highest priority.”

The reason is that China’s rising energy demand, the fastest in the world, is colliding with its rapidly declining supply of fresh water. China, the nation’s third driest country, has roughly 163 trillion gallons of water available for all uses, according to a study released in December by McKinsey’s 2030 Water Resources Group. About 63 percent is used by farmers, down from 85 percent in 1980, according to China’s Water Ministry. Municipal and domestic use has been stable at around 12 percent, and industry uses 23 percent; 80 percent of that is used to operate and cool China’s 10,000 coal-burning generating units at 550 power plants.

But by 2030, according to the McKinsey study, the demand for water in China’s rapid growly economy will reach 215 trillion gallons, 52 trillion gallons more than is available. The increase in coal production and consumption accounts for most of the increase. The amount of water consumed by China’s energy sector will reach 70 trillion gallons or 32 percent, said McKinsey, while agriculture’s share will fall to 51 percent.

In effect, the most critical economic and environmental question in China today, said Yang and Kejun, is whether there is enough water for China to continue its stunning modernization. “We’re putting a lot of time to understand that challenge,” said Yang.

Last year, amid one of the most severe droughts in China’s modern history, the Ministry of water announced a new “water intensity” goal, similar to the emissions “energy intensity” goal, to reduce water consumption 60 percent for every dollar of economic activity. The new policy is stirring work on water recycling, cleaning up China’s polluted waters to make them suitable for industrial use, and conservation. China also is developing new coal-fired generating technology that will increase the fuel efficiency of its generating stations while also lowering water consumption by half, said Kejun.

Yang added that more investments in wind power and solar photovoltaics, which do not use water, will help. And the country has passed new building standards, appliance standards, and other efficiency measures that will conserve energy, and thus reduce water demand. “Innovation and new technology is the answer,” said Yang.

Both experts acknowledged, however, that the unyielding economic trend numbers still point upwards at a steep angle, meaning rapidly rising energy demand. Similarly, the angle of the downward trend for water supply, made sharper by the effect climate change is having on precipitation, point to an unavoidable collision. 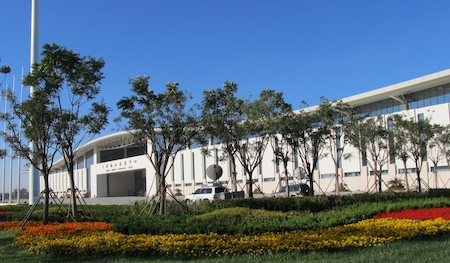 Here’s What Happened to All Those Closed Dealerships