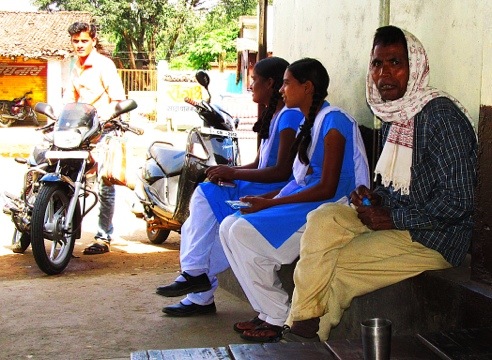 In India, and around the world, people now question the credibility and character of American governance. Photo/Keith Schneider

NEW DELHI, India — America seems, finally, to be getting it. The Newtown massacre changes things. Just how much and how fast is unpredictable. But we are different today than we were on December 13, the day before the killings.

The age and number of children murdered. The blood-exploded serenity of a wealthy New England town. The bizarre and mendacious response from assault weapons advocates who say that the solution is to put more guns in schools. There’s no argument that America’s new perspective is informed by these essential factors.

Something more enduring looks to be unfolding, though. What’s caused Americans to psychically engage the tragedy at Sandy Hook Elementary School in a way that we rarely experience is this: The murders of 20 first graders exposed the dementia of how America allowed a minority to endanger our nation and our lives. The horror of that morning in Connecticut clarifies and crystalizes in the most awful way the manifest risk to the United States of the right’s psychotic governing strategy.

I draw this conclusion not as a partisan but as a diligent reporter whose perspective is shaped by a capacity to gather facts, recognize trends, and produce cogent narratives. My track record is pretty good but not perfect. Four years ago, with the collapse of the banking sector, I thought we’d moved past the ugly politics of polemics, hate, and inflexible ideology. Instead, it got worse.

More than a decade of Republican dogma (and feckless Democratic opposition) has produced mess after mess, tragedy after tragedy, a string of body blows to the nation that tell a mean story — a terrorist attack, a war fostered by a lie, an economic collapse, two cities drowned by climate change, dysfunctional state and federal governments, regular mass murders. Each event, building on the last, provides irrefutable evidence of negligence, a pathology of policy making and governance that we now see is explicitly aimed at tearing our country to tatters, and that is putting Americans in peril.

The Newtown massacre, both inexplicable and horribly familiar, shook the country in a different way. Terrible as it was, the massacre could mark the moment that America, like the sci-fi hero held in a drug-induced coma administered by the evil overlord, regains its senses and saves the federation. Newtown, Connecticut could be the place, and the deaths of so many children could be the distinguishing event that prompted America to mean it when it said, “Enough!”

Until December 14, America wasn’t really ready to do that.

It wasn’t enough for the Supreme Court’s conservative majority to sanction the theft of a presidential election in which the true winner of the popular vote lost out to voter suppression and hanging chads.

It wasn’t enough for President George W. Bush to dismantle the White House terror deterrence program and toss aside the national security assessment that explicitly documented and warned that “Bin Laden Determined to Strike in U.S.,” 5 weeks before the Twin Towers fell.

It wasn’t enough for President Bush and his cabinet to lie about imaginary weapons of mass destruction to initiate a terrible war against a nation that had nothing to do with the attack. Or for the same president, and his Congressional allies, to diminish the capacity of the Federal Emergency Management Agency to assist the New Orleans poor in responding to a Category 5 hurricane, was horrifically late in dispatching federal aid and rescue personnel, and then commend the FEMA director, “Brownie, you’re doing a helluva job,” for his ineptness.

It wasn’t enough for the same president and his appointed regulators to weaken oversight and encourage desperately greedy lending practices that plunged the country into a depression and produced the largest real tax increase we’ve known in my lifetime — lost wages, lost jobs, lost businesses, lost homes.

It wasn’t enough that in the depths of the economic emergency, and urged on by a ravenous kennel of red-eyed right wing media dogs, Senate Republican leader Mitch McConnell declared that his party’s number one goal was to prevent President Obama’s re-election.

It wasn’t enough that former vice-presidential candidate Sarah Palin joined Fox News as a commentator in January 2010, and two months later actually posted cross-hair gun targets on her Web site designating progressive House lawmakers, among them Arizona Representative Gabrielle Giffords, that needed to be taken out — “Don’t Retreat – Instead – RELOAD.” In January 2011, a gunman in Tucson acted on the suggestion, killing six people and gravely injuring Rep. Giffords and 11 others. The gun lobby continued to argue that guns don’t kill people, more mass murders occurred, and Palin kept her perch at Fox News, the chief marketing and communications division for the Republican Party and the NRA.

It wasn’t enough that the conservative majority on the U.S. Supreme Court ruled that campaign finance restrictions interfered with the free speech rights of corporations. The decision opened the campaign money valve even wider than it was. A great green gout of money this year poured into state and federal campaigns, providing the conservative rich with even easier means to support more crackpot candidates, and more access to the crackpots they actually helped to put in office.

It wasn’t enough, even, that conservative ideology insists as a matter of political purity that the warming climate is a scientific hoax, even as a deepening drought killed grain crops across the Great Plains and Midwest, engulfed the West in wildfire, and dried Texas so completely that farmers and energy developers are battling for water. Then, right on cue just as climate models predicted, a superstorm that defied characterization attacked America’s eastern seaboard at high tide, drowning Manhattan and brutalizing New Jersey.

This week House conservatives defied their own House Speaker, defended the richest Americans against a very modest tax increase, damaged the nation’s credibility in global finance markets, risked a new economic slide — and defended assault weapons and the Second Amendment. I’m far from the only writer who is convinced the right is a danger to the country.
.
Had enough? The souls of the children murdered in Newtown are crying out to a hurt nation, “We’ve had enough!”

2 thoughts on “In Newtown Massacre, the Manifest Danger of Deceit and Delusion”