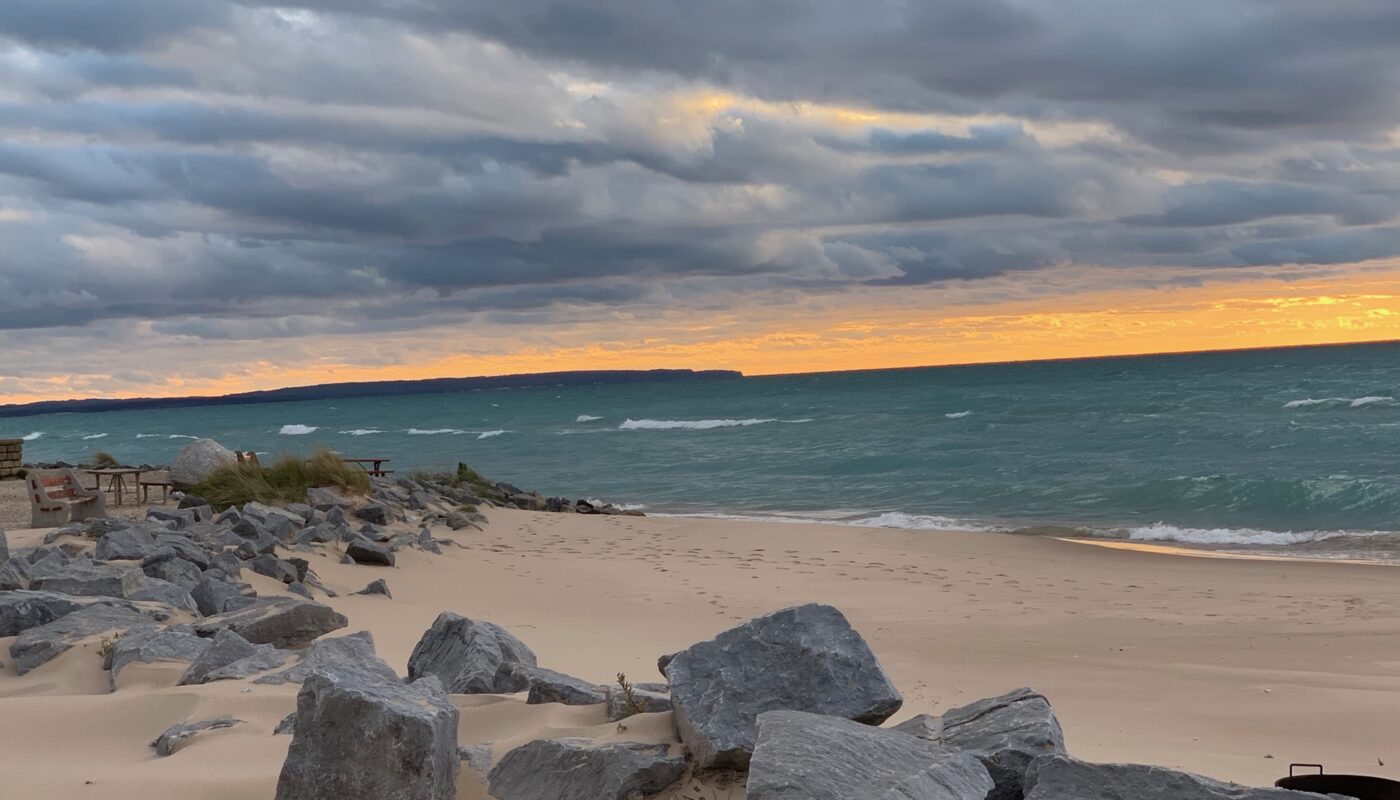 BENZONIA – This could have been a miserable Thanksgiving. It’s not. On November 8 sane Americans voted their disapproval for the dreadful politics of MAGA America. Never more so than in Michigan. Even in our three-county corner of the lower peninsula Democrats and sufficient numbers of disgusted Republicans voted to reject election-denying, Trump-supported candidates and re-elect the incumbent Democratic governor, attorney general, and secretary of state. Having cast off the psychic weight of election dread, shed the cognitive dissonance of an America gone berserk, I’ve awakened every morning since feeling an uncommon lightness of being. Happy Thanksgiving.

There’s so much in my life to celebrate and commend. My loving and beautiful wife who is such a fun and capable partner. Our families, though spread far and wide, doing well in their lives. We have a granddaughter now and she, her mother, and her father are leaving Seattle and settling in Chicago next year. That’s a five hour, not five day drive. Our dear friends, here in Michigan and scattered across the country. Also doing well.

Our home and its gardens are cloaked in an uncommonly thick robe of November snow today. We’re here full-time now and it feels solid and right. Gabrielle and I embarked on a new project earlier this month to renovate a mid-1950s home we bought, and turn it into a two-bed, one-bath, long-term rental with a two-car pole barn garage. We’re updating almost every piece of infrastructure — installing a new kitchen, a high-efficiency low temperature heat pump for heating and cooling, a new well, pump, pressure tank, and line to the house, a remote lift for the garage door, updated bath, new flooring, lighting, and more.

We see an opportunity to diversify our modest portfolios and earn income. We’re also intent on providing year-to-year housing for residents in a county where short-term rentals have overtaken the market. One of the many principles Gabrielle shares with me is devout allegiance to the public interest. Employers here are experiencing severe disruption because too many existing homes have been converted to serve visitors. New employees and their families can’t find places to live.

Another principle Gabrielle and I share is love of travel and fervor for our magnificent American landscape. Having traveled extensively and reported from almost 40 countries on five other continents I can offer this accurate assessment: the United States has done a keen job of securing its natural gifts. We live in a beautiful part of the world. Every state has taken care to secure its sublime places. Benzie County where I’ve lived and worked for three decades is an alluring display of thick forests, bountiful meadows, tall dunes, Great Lakes beaches, and clean lakes and streams. All of it is made possible by a convergence of public policy to safeguard natural resources and Mother Earth’s capacity to heal manmade scarring.

As I noted in this recent article about Platte Lake: “Since the first Earth Day in 1970. Few rural counties in Michigan, or the nation, have more powerfully embraced the responsibility to safeguard natural resources over the last 52 years.  Sleeping Bear Dunes National Lakeshore, one of 3 Great Lakes national lakeshores and one of 14 national lakeshores and seashores across the country, was established in 1971. The Betsie River was declared a natural river in 1973, one of 16 in the state. The county’s magnificent dunes and ample wetlands have been protected by state law since the early 1970s. Betsie Bay recovered from years of sewage and industrial pollutants due to the 1972 federal clean water law and state enforcement. There are 20 nature preserves developed in Benzie County by the Grand Traverse Regional Land Conservancy since the early 1990s, including the 3,800-acre Arcadia Dunes preserve along Lake Michigan in Joyfield Township.”

Benzie County is an encouraging example of what’s possible when residents reach agreement on joining ecological gifts with economic goals. There are others. In August and September Gabrielle and I traveled cross-country from Benzonia to Seattle, camping on the way out. Earlier, in January, I traveled from Kentucky to Arizona for a project on the Southwest’s water scarcity peril. Both trips encompassed such astounding geography – forests, mountains, treeless plains, deep canyons, wide rivers, monumental cliffs, scorched desert. It’s all essential to our well-being as individual Americans, and vital to our national spirit.

Since the early 1980s, when I moved from Charleston, S.C. to Sacramento, I’ve traveled cross-country by car 10 times. And each time I’m frustrated by this question: given such astonishing natural bounty why do we spend so much time and energy arguing?

Our land and waters are a unifying message. Here in my part of the world they tie us together, liberals and conservatives. They have the emotional power to do the same elsewhere. I’ve lived in South Carolina, where the coastal marshes are cherished natural assets. I’ve lived in New England, California, the Middle Atlantic, the Ohio River Valley, and the Great Lakes region. All are places that have learned that securing land and water is, in fact, a pact that binds ecological values and economic prosperity.

We’ve learned this in America. It’s a lesson that lurks around big decisions on industrial projects, infrastructure modernization, housing developments and so on. Every now and again ecology and economy break out into full-throated election year debate. The MAGA idiocy , though, has largely stifled such considerations. The 2022 election results could be the start of a saner way to consider where America is heading this century. Even if it wasn’t this year careful consideration of land and water is a stout value for most of us.

A weight was lifted earlier this month. Thanksgiving 2022, it turns out, is a day to celebrate features of our lives as Americans that still make sense.

One thought on “How Crucial Was 2022 Election? Thank You Sane America”