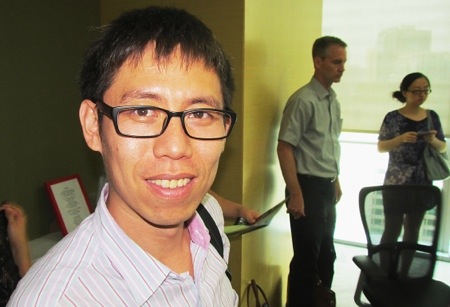 BEIJING — Qingwei Sun, who investigated and wrote two revealing reports for Greenpeace in the last two years on how China’s giant coal sector uses, and in some cases abuses the nation’s water reserves, is a 36-year-old geographer from Lanzhou, the capital and largest city in Gansu Province.

At the moment, he’s also one of the highest profile environmental researchers in China. Last month, as a campaigner for Greenpeace, he was the lead author of a revealing account of how Shenhua, China’s largest coal company, is draining groundwater supplies near Ordos, Inner Mongolia in order to keep the world’s newest coal-to-liquids refinery and associated plants operating.

Circle of Blue also knows a lot about the Shenhua refinery. Almost three years ago I visited the site of the refinery as part of our Choke Point: China report, interviewed the plant’s chief design engineer, and learned that coal-to-liquids refineries consumed so much water — about 10 cubic meters for every metric ton of fuel produced — that China’s program to build over 20 such refineries had been curtailed to constructing just three. Shenhua said the refinery consumed about 10 million cubic meters annually, or roughly 3 billion gallons.

Last month, in his second Thirsty Coal report, Qingwei reported that Shenhua’s refinery, and the complex of processing and power plants around it, consume 30 million cubic meters of water annually. All of it comes from wells drilled ever deeper into the region’s freshwater aquifers. So much water is being drawn to supply the complex that groundwater levels have fallen 100 meters (300 feet) since the plant went into operation in December 2008.

Qingwei and his colleagues documented how lower groundwater depths in the region dried surface lands, forced farmers to curtail crop and livestock production, drained a lake, and caused economic and ecological havoc. The report named Shenhua as the culprit, such a bold step for the Chinese office of a foreign NGO that the Central Government blocked Internet dissemination of the study’s findings in China. Meanwhile, over 500 news reports about the Greenpeace study were published and posted outside China, Qingwei said.

Earlier this week I joined Qingwei and a group of American and Chinese water researchers on a speaking and meeting tour to China’s leading natural resource science groups. During those meetings, China’s government researchers revealed just how deeply Qingwei’s report had penetrated the science and policy infrastructure in Beijing, and just how frustrated they were with its conclusions. One after another, government scientists sought to find fault with Qingwei’s numbers, raise questions about his tone and fairness, and express what they said was disappointment in his conclusions. None, though, said he was wrong.

The focus of both Thirsty Coal studies is the consequences to China’s water supplies from the construction and operation of enormous coal bases that China installed in its coal belt, which runs across the provinces of the dry north. Just like the first Thirsty Coal report, completed in collaboration with a unit of the Chinese Academy of Sciences, the second study is a first-rate piece of reporting that merits the attention it is receiving.

The Thirsty Coal project came with a high personal stake for Qingwei, and not because of the government pressure. Almost three years ago he left Gansu, where he lived since 1994, and where his wife and nine-year-old son still live, to start a new job as a campaigner in Greenpeace’s Beijing office. His interest was water supply and coal production.

His project started at the same time, winter 2011, that Circle of Blue and the Wilson Center published Choke Point: China, the first penetrating account of how the world’s largest energy producer and consumer was running headlong into an ecologically and economically dangerous barrier almost nobody in or out of the central government had previously recognized. China, said our report, simply did not have enough water in its desert north to mine, process, and burn prodigious amounts of coal, grow a fifth of the country’s grain, and supply the region’s rising modern cities.

Qingwei told me the Choke Point: China project gave his work clarity and momentum inside Greenpeace, and some personal comfort. “I read it, of course,” he said. “I thought, ‘Oh, I’m not alone. We are dealing with the same problem.”

Choke Point: China and the two Greenpeace Thirsty Coal studies have attracted significant government and public attention inside China and in Asia. Domestic and international media are tackling the story now. “The coal-water connection is becoming popular in China,” said Qingwei. “Before that nobody paid attention. Circle of Blue is international. We are inside China. The two together are very powerful.”

Two Thirsty Coal reports, though, turned out to be enough for Qingwei. He just left Greenpeace to take up a new post as deputy secretary general of the China New Energy Chamber of Commerce, a trade group in Beijing. The Thirsty Coal project continues at Greenpeace without him. Deng Ping, a climate and energy campaigner at Greenpeace is working with colleagues on a third “Thirsty Coal” study.

Qingwei will stay in Beijing, where he lives alone during this part of his life and career. His wife is a scientist with a geography research unit of the Chinese Academy of Sciences in Lanzhou. Qingwei said he flies home about once a month to be with his family. “This is the way it is right now,” he said, shrugging.