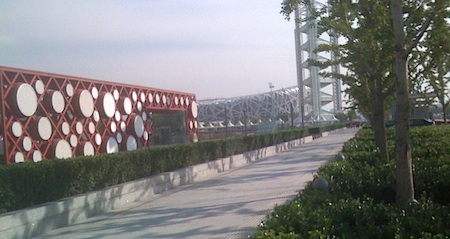 A long time ago, in the mid-1980s, I wrote about New York City’s infrastructure modernization in Manhattan Inc., an upscale business magazine that no longer exists. It was a perfect gig for a writer who as a kid counted bridge overpasses on the highway during the regular family drive from suburban New York to suburban Boston to visit my grandparents. I loved watching new skyscrapers get slotted into New York City’s skyline. I was fascinated with the bulldozers and road graders at Interstate highway construction sites. In my first weeks as a New York Times reporter I spent an evening with a Port Authority construction crew assigned to upgrade the ventilation system in the Lincoln Tunnel. It was classic boy stuff.

Infrastructure, in short, is the collection of basic civic equipment – roads and highways, rail lines, reservoirs, dams, water and sewage pipes and treatment plants, transmission lines, broadband, airports, public buildings, parks and plazas  – that civilizations require to function efficiently and provide citizens a reasonable quality of life. Infrastructure is the public investments that nations make to advance their economies and provide for their citizens. Essentially, infrastructure is a measure of a nation’s vision, will to invest, and its capacity to join engineering and design in service of the public interest.

Heads of state and their aides think of infrastructure in terms of budgets and spending. But architects and engineers have a more fun phrase  –  “tolerances” – that they use to describe their work.  Tolerances are a measurement of precision — the refinements of spacing, line, angle, materials, and craftsmanship that describe the quality of design and construction. Basically tolerances define a nation’s capacity to make the investments –  and for designers, developers, and contractors the capacity to sweat the details to produce projects that last 150 years in instead of 15.

Infrastructure and Tight Tolerances
Let’s just put it this way: China knows tolerances. After spending more than two weeks in Beijing and Tianjin, it’s plainly evident that China’s drive to build its infrastructure and the nation’s rapid rise to the top of the world’s economic heaps is told in its ability to fit the pieces together to achieve state-of-the-art design tolerances.

The most exceptional example that I found on this trip, my first to China, was the Meijiang Convention and Exhibition Center, a 2.5 million-square foot marble, glass, and polished stainless steel showcase of Chinese design and construction technology. There is no comparable exhibition center in the United States, and certainly none that was constructed in eight months, as the Meijiang center was earlier this year before it opened in September. The way the interior steel trusses supported the roof 10 stories above the center floor, the close fit of the fine-grained wood walls, and polished marble floors, and the use of natural light and noise absorbing carpets made the gigantic building seem almost cozy, airy, and exceptionally comfortable. Just as impressive was the great plaza outside, as large as a military parade ground, a perfectly flat expanse of marble paving tiles so precisely fitted together that the lines between the tiles were thousands of feet long and as straight as a gun shot. 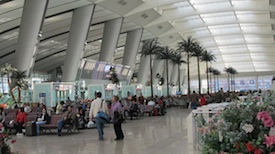 The Impossible Plaza That’s Possible
Karl Burkhart, a communications specialist with Tcktcktck, and a trained designer with a masters in architecture, also marveled at the convention center and the plaza. He told me that in the United States, such a building would take two years to plan and design with available computer programs and equipment. The speed with which China executed the Meijiang convention center indicated that Chinese architects used state-of-the-art three dimensional design programs and constructed the building as they developed the design. Moreover, he said, the great marble plaza would not even be attempted in the U.S. because even if it could be done – which he doubted – it would be so expensive that “no American architect in his right mind would even suggest it.”

I’ve spent weeks at a time in every state in the United States except Hawaii, and have now traveled to over 20 nations on four continents, and when it comes to the overall scope and quality of infrastructure, the U.S. remains among the global leaders. Of special note in the U.S. today is the competition among cities to build new light rail lines that join neighborhoods to each other and to downtowns.

But the current scope of infrastructure work in the recession-dragged, politically daffy U.S. pales in comparison to what China is achieving today. The other showcases of design and engineering tolerance are China’s high-speed rail lines, and the fabulous modern train stations that launch and catch the bullet trains. The distance from Beijing to Tianjin is crossed by a snow white train with blue accents that streaks at 205 miles per hour on an elevated track. Outside, the flat landscape flies by. Inside there is no quiver, no shake, no tremble, and no noise except the muffled sound of rushing air. The non-stop 90-mile trip takes 30 minutes.

In Tianjin the train launches from a crowded and spotless station that is lit naturally with sunlight pouring through a grand glass roof. In Beijing, the train arrives in an even newer station where the platforms are paved in mirror-shine marble and the waiting room, distinguished by towering blue, green, and red LED arrival and departure boards, has even more natural light from windows that line the roof. China has built 4,000 miles of high-speed rail and has 6,000 more under construction or planned.

An Era Passed For U.S.
It’s not that the United States hasn’t constructed some of the world’s iconic infrastructure. The Hoover Dam, more than 700 feet tall and built to generate power by holding back the mighty Colorado, was the highest dam in the world when it opened in 1936. The Empire State Building was, for decades, the tallest building in the world. The Golden Gate bridge spans the Pacific entrance to San Francisco Bay. The 40,000-plus mile Interstate highway network is a global envy. The great metropolitan skylines of New York, Boston, Chicago, Denver, and Los Angeles are recognizable around the world.

It’s just that the exuberance of China’s construction program, and its accompanying attention to detail and tight engineering tolerances, are emblems of a country that’s so clearly saying “It’s our time!” Meanwhile in the United States, we seem an old and tired nation, unwilling to marshal the unity of purpose that it takes to build a high-speed rail network, or great solar and wind farms, or new smart transmission grids or even the great soaring buildings that once distinguished our nation.

New construction has come to a near halt as a result of the Great Recession. And where our architects thrive, and where we’re putting our cultural resources is in new stadiums like the one in Dallas that has one of the world’s biggest TV screens, or New York where the Giants and Jets play in one sky-box extravaganza and the Yankees play in another. We’re playing games while China plays us.

China is certainly awake in the 21st century. The corridor between Beijing and the flat lands south of Tianjn is one immense construction zone. Every quarter mile, on both side of the rail line and highway, towers rise in clumps. Not one at a time, but in groups of 10 or 15. The International Energy Agency reported today that China has overtaken the United States as the world’s largest consumer of energy.  It’s another of China’s world firsts, which also include being the largest producer of climate-changing emissions, the largest car market in the world, the largest solar and wind markets, and the fastest growing industrial economy.

Within a decade China could also surpass the United States as the largest economy. It looks inevitable. The American century ended on 9/11. The soaring Chinese century, and its tight tolerances, is very clearly past the lift-off phase. 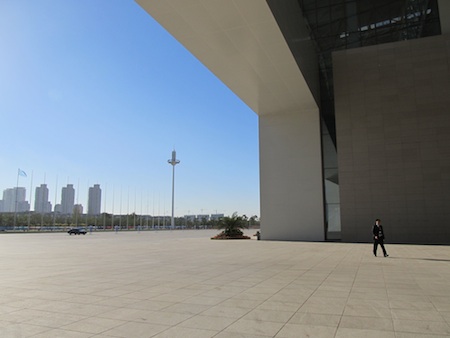 3 thoughts on “In China and the U.S., Measuring Tolerances”