Don Chen, the very sharp founding executive director of Smart Growth America, announced late last year that he was taking a position with the Ford Foundation. Interesting move for a canny advocate and non-profit executive with the sort of keen entrepreneurial instincts to take an eight-year-old organization from a Washington-based start-up to a national leader in new designs for development. Smart Growth America has a $2 million annual budget and a 10-member staff that includes a former Democratic governor of Maryland, and a former editorial writer at the Atlanta Journal-Constitution. 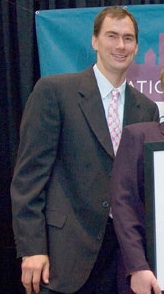 The choices made by both men seem plainly apparent. How the organization and the movement it fosters will fare is less so.

The role of non-profit founder and executive director unfolds in evolutionary stages that generally occur in two-year time frames. The first two years is all youthful energy, rapid response, program building, strategic choice, and instinctive fundraising. The next two are generally consumed with hiring, training, coalition building, program expansion, and a more formalized program of donor and foundation development. The next two are consumed with the limits of growth, more intensive fundraising, the start of moderate staff turnover and replacement, and the installation of administrative procedures designed to make operations more efficient, but sometimes don’t. And then comes the really hard work of sustaining programs, budgets, board relations, coalition partner relations, formal development programs. By year eight, non-profit directors tend to get so immersed in the administrative and fund-raising programs, and so distanced from the principles and values that prompted them to start their organizations, that they begin to wonder what happened. Year eight, in short, is a long time in the life of a non-profit director and often the time of greatest peril in a non-profit’s development.

When an institution as stable, prestigious, and well-funded as the Ford Foundation comes knocking it’s easy to understand why a talented guy like Don Chen would respond.

Overseeing a government program is the other end of the spectrum. The working environment is stable to the point of being calcified. The sense of adventure and accomplishment comes from distributing grants to capable organizations that produce solid work that attracts some (but not too much) attention. Program directors like to hire good people. They are challenged by treading paths through the administrative and Congressional briars that don’t leave too many nicks. They build relationships in and out of government, in and out of Washington. They speak at the right conferences. They become expert in policy and national practice. If they stay long enough, as Geoff Anderson has, they get recognized as significant leaders in the field.

I’ve worked with Don and Geoff for years and know them well. Both are experienced, knowledgeable men who are capable managers, fair with their staff, and generous with their time. But here is the big challenge: Can the organization and the new director sell the goods?

There is no doubt that Smart Growth America and the other gold standard public interest organizations that focus their work on the consequences of growth have made an effective case for seeking changes in public and private investment that make places better. They’ve developed the ideas that have resulted in building communities and neighborhoods fit for the 21st century that are more economically competitive, use less energy, reduce congestion, invest in transit, curb pollution, establish open spaces, and provide housing opportunities for people of every income level. Smart growth is a set of policy and investment tools proven to work in more than 40 states.

The question is whether the Smart Growth movement can command these ideas and build the strong coalitions that translate them into policy and investment practice at the federal level, where the real money lies. With the exception of the transportation funding bills of the 1990s, which produced more rapid transit, the Smart Growth movement has been less successful in changing the old spending priorities for highways, housing, natural resource protection, and urban investment at the federal level. It will take a powerful alliance of untraditional allies at the grassroots — advocates for halting global climate change, improving housing, strengthening labor, transit advocates, and metropolitan business and neighborhood groups respected by both parties — to convince Congress and the White House to break with convention and alter how and where federal money is spent.

Geoff Anderson has the inside government experience to know where the pressure points lie, as well as the earnest temperament to build the coalitions to press for new policy. But it’s not clear whether he has the political instincts to step outside the safety zone he understood so well as a government manager, or the entrepreneurial energy to simultaneously lead a staff, develop new programs, and serve as the chief fundraiser. If he does, Smart Growth America will take its place among the nation’s truly influential public policy organizations. If he doesn’t, the young group will gradually decline. A lot of us out here in the provinces wish him the best in his important new venture.