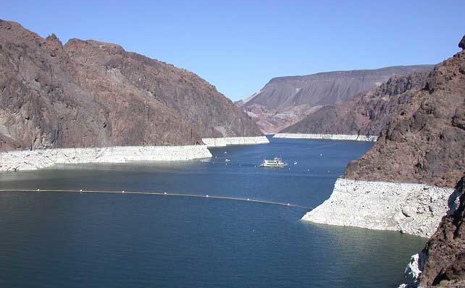 The era of global climate change has produced such rainy and warm conditions in northern Michigan that a winter’s worth of snow and ice melted completely here over the last two days. Meanwhile it’s dry, desperately so, in several huge and significant regions of the country.

The striking contrasts are putting strains on the culture and economy in ways we’re only starting to understand. Yesterday I stood in a driving January rain talking to Jim MacInnes, the chief executive of Crystal Mountain, our local ski resort. He was interested in new economic data he’d read online. I was watching the deep gullies forming at the bottom of Buck, the resort’s steepest slope.

The signs of changing climate and an economy that has been slow to respond, are everywhere.

Judging by the thickening white sashes of salt lining Lake Mead and Lake Powell (see pix), the largest reservoirs in the United States, the drought on the Colorado Plateau is not only deepening, it is pushing water supply conditions for roughly 25 million people from serious toward dire. The moment of reckoning over water supplies, anticipated since the 1960s, appears to have arrived.

Arizona, Utah, Nevada, and southern California form the fastest growing region in the country. All are served by the Colorado River, which provides drinking water to Las Vegas, San Diego, Los Angeles, Phoenix, and hundreds of smaller communities. Lake Powell, north of the Grand Canyon, and Lake Mead, which lies just south, are less than half full and dropping steadily. Both are 105 feet lower than their full pools, and dropping about eight to ten feet a year.

The ring around the reservoirs is beginning to be seen as a noose around the neck of the region. Not surprisingly it’s become politically palatable to consider changes in water management and use once deemed impractical. Conservation measures were put into effect in Phoenix, and in Las Vegas the water district is paying homeowners $1 a square foot to tear up their lawns and install desert plantings.

The Colorado Plateau states and California last month finished an agreement that provides both more flexibility and certainty in who has the right to what’s left in both reservoirs, and sets triggers for declaring emergencies that dramatically cut use. The Metropolitan Water District, southern California’s major water provider, announced in November that they will buy 65 billion gallons of water annually from Central Valley farmers north of Sacramento.

Orange County is preparing to turn on a new waste treatment plant that will pump “highly treated wastewater from their new purification plant to percolation ponds in Anaheim. Eventually, the recycled water will be delivered to about 2.3 million people.” And all the desert states are more intensely eyeing the Great Lakes.

Hot Atlanta
The other region of the United States where water demand is outrunning supply is the Southeast. There’s been more rain there this week; Nevertheless, for the first time in the lives of most of the 10-county Atlanta region’s 4 million residents, turning on the tap is an invitation to consider the limits of growth. The U.S. drought map continues to show that precipitation, soil moisture, and lake and river levels are in “extreme” dry condition.

The Atlanta Journal-Constitution published a nice piece on the region’s inability to plan and invest in water supply infrastructure. And Atlanta Water Shortage keeps a near-daily update of conditions.

Texas Too
Water authorities in the Texas Panhandle late last month said they were cutting the water supply from Lake Meredith to 11 cities, including Amarillo, Plainview, Lubbock, and Brownfield. The reason, according to the Houston Chronicle: “brutal drought conditions in two of the past three years.”

Amid Turbulence A Path For Climate Action