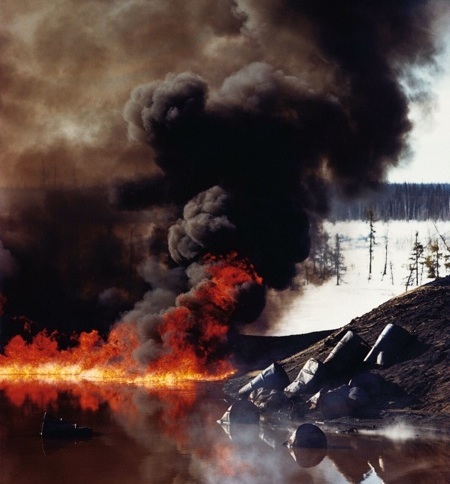 Day 59. The morning after President Barack Obama called for a “national mission” in pursuit of a clean energy economy the BP blowout gushes oil into the Gulf at the new estimated rate of 60,000 barrels a day. And though the president said “we can’t afford not to change how we produce and use energy -– because the long-term costs to our economy, our national security, and our environment are far greater,” the language lacked the details for achieving that goal, and the candor about the stakes.

What the president did not do last night, even with his telling Oval Office appearance, is describe the extent of this moment of emergency. He did not say, though he should have, that the monstrous oil blowout, awful as it is, is not just a national calamity. It’s global.

The accident illustrates just how dangerous the last decades of the Age of Oil are almost certain to be. Industrial society’s devotion to fossil fuels is producing massive damage to the environment, the economy, and the quality of life for billions of people. The basic biology of the Earth has begun to buckle. The United States is now being hit with body blows — 9/11, Katrina, economic collapse, the Gulf disaster — that all have the same source: Development and profligate use of fossil fuels.  Moreover, as the president’s gingerly treatment of the issues last night displayed, our political systems are not up to the challenge of deciding and pursuing a new development strategy to avoid the worst of the inevitable consequences of the coming Age of Turmoil.

It’s not going to be messy. It already is. In the oil development arena alone, the Earth is bleeding. Almost every continent is affected.

Calamity in Spades
The Gulf of Mexico is the scene of an unstoppable deep water blowout that is heading past 100 million gallons.

Nigeria’s Niger Delta, a principal source of American crude oil imports, experiences 2,000 spills a year into one of the world’s most important wetlands. They are caused by attacks on pipelines, blowouts, and shipping accidents.

In Ecuador’s Amazon rainforest Chevron is accused by activists of dumping nearly 20 billion gallons of toxic waste, produced waters, and other contaminants into rivers — “4 million gallons a day for more than two decades,” according to the Amazon Defense Coalition. The company, which is the focus of 17 years of litigation that has moved to a Peruvian court, also is accused of discharging 345 million barrels of crude oil into the rainforest and wrecking an indigenous way of life, and an ecosystem that is about the size of Rhode Island.

In the Komi Republic in Russia’s Siberia, hundreds of thousands of barrels of oil have leaked and spilled from mismanaged drilling platforms, leaking pipelines, and broken pumps and equipment. The runaway crude is polluting the region’s lakes and rivers. (That’s a burning oil pit in the picture above in shot taken by Greenpeace.)

In Australia last summer, a blowout on the West Atlas drilling rig in 260 feet of water in the Timor Sea took 73 days to plug. And in a scene that foreshadowed the Deepwater Horizon explosion, the West Atlas rig caught fire in November 2009 and burned with the same hellish intensity. The Australian government is scheduled to release its formal assessment of the accident on June 18.

In Canada, development of the Alberta tar sands is steadily destroying a region of Boreal Forest, teeming wetlands and clean rivers. Oil industry investment in the tar sands has reached $12 billion annually. Production is now 1.3 million barrels of oil a day. For every barrel of oil produced, four barrels of fresh water are contaminated, and much of that is stored in enormous toxic and leaking ponds.

Action and Deception
As the president tries to marshal support for the clean energy transition, his administration is quietly negotiating agreements with Canada and pipeline developers to bring more tar sands oil, already the number one source of U.S. imports, to new refineries proposed for South Dakota, Michigan, and Maine.

Arguably the most significant consequence of last night’s speech, which called for much more serious regulation of deep water drilling, is to expand the market for tar sands oil. The industry, and perhaps the administration, will argue that the risks of development are lower.