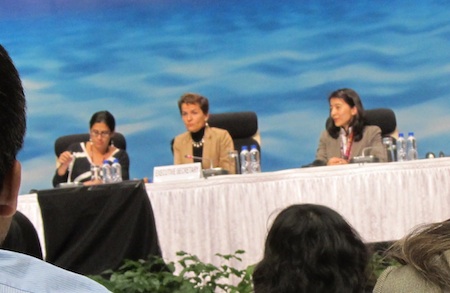 TIANJIN, China — Two of the significant participants in the UN climate change conference here, UNFCCC Executive Secretary Christiana Figueres (at center in pix above) and chief U.S. negotiator Jonathan Pershing, have made it known they are increasingly unhappy with a tangled negotiating process that seems unable to move beyond producing more snags.

Over the last 18 hours or so, the two made their frustrations public and issued veiled warnings about the relevance of the negotiations and whether it was meeting the urgency of the task at hand.

In statements to reporters yesterday Pershing described the punishingly slow pace of the negotiations, which he said were revisiting old issues and haven’t moved nearly far enough beyond where they were nearly a year ago, when countries agreed to the Copenhagen Accord. “What is frustrating in these negotiations is to see countries not using that as the basis, but relitigating things that we resolved,” he said.

Pershing, who’s participated since the late 1980s in UN climate conferences in various roles inside and outside the government, also said that the pace diminished the value of the UN climate negotiations, and that while the U.S. would stay in the process it also was pursuing progress on global warming in other councils of influence around the world.

Negotiators hoped to use the six-day Tianjin climate conference, which ends on Saturday, to close gaps on issues big and small in order to possibly reach consensus on one or more of the big ideas that could lead to a binding legal agreement next year or in 2012.  Those include financing for developing nations to adapt to climate change, technology transfer, forest preservation, limits on carbon emissions, and a means to verify progress. The annual 2010 global climate summit starts at the end of November in Cancun, Mexico.

This afternoon, Figueres briefed non-governmental organization leaders and expressed a similar level of alarm at how little movement has occurred in the first four days of negotiations in Tianjin. “Parties had a huge number of issues and a huge number of details within each issue when we got here,” she said. “The  effort is to pair that down into a realistic number of issues and a realistic level of details. There’s a big challenge here in balance.”

But Pershing and Figueres clearly indicated that the negotiations are not getting as close as they need to in order for the summit in Mexico to yield an outcome significant enough to signal the world is ready to come to a binding climate agreement. That, in turn, could jeopardize the credibility of the UN process for developing a legal framework for limiting climate changing emissions.

“We’re locked in detail and specificity,” said Figueres. “It’s a 3-D picture and overlaid to all of that there is the big question is how do you choose, literally choose, how do you pick out from all the details those aspects which will be the kernels from which parties make a decision? And what do you do with the rest? There is no possibility to have a legally binding treaty in Cancun. But it can be a very good effort to set the foundations and cornerstones.”

She urged negotiators to lay aside at least some portion of their differences and move the world closer to an agreement. “We can not safeguard our future. I do still harbor the hope that we will still be able to make a difference.”

She added: “Can we guarantee that you will have the same quality of life that we did when I was growing up on this planet?  I don’t think so. There is already a built-in precarious nature. We are bound to what is happening. There is an increase in CO2 in the atmosphere. We are giving back a diminished planet. It’s true. I am not going to sit here and pretend that the planet that you have now is the same planet we had when I was growing up. It’s not.”

McCain Blinks on Debating, The Bailout, WMD, And Our Responsibility