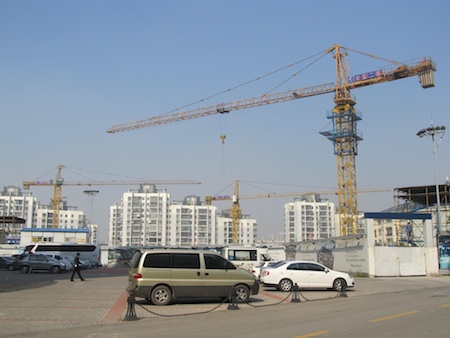 On opposite sides of the Pacific, leaders of the world’s two biggest economies and carbon polluters are plainly thinking about clean energy to power up their economies and cool the climate.

In Washington, the Environmental Protection Agency and the National Highway Traffic Safety Administration announced their intention to extend vehicle efficiency standards that went into effect in April in order meet a national goal of 60 miles per gallon average fuel economy by 2025.

President Obama, in an interview in Rolling Stone magazine promised to keep pushing the clean energy and climate action envelope. And in his Saturday national radio address, the president attacked the Republican campaign plan to scrap clean energy incentives.  “We can go back to the failed energy policies that profited the oil companies but weakened our country,” the president said. “We can go back to the days when promising industries got set up overseas.  Or we can go after new jobs in growing industries.”

China Making Clean Energy Progress But Coal Dominates
Meanwhile in Tianjin, where China is hosting its first U.N. climate conference this week, Chinese officials also are touting clean energy initiatives. They include mandatory building standards established five years ago that are lowering energy demand, new offshore windfarms that supply as much power as big coal-fired power plants, new cities built on principles of energy efficiency and conservation, and a national commitment to lower the levels of carbon pouring into the atmosphere.

What distinguishes China from the United States is that there’s no political opposition getting in the way. China’s national policy vector is very plainly pointing in the direction of incorporating more clean energy technology, and energy efficient practices into its economy. The U.S. gear at the national level, with Republicans campaigning on a message attacking climate science, the Senate unable to act on a comprehensive bill, and investors unsettled by the roiled politics, is in danger of slipping into reverse if it hasn’t already done so.

What makes the countries similar, though, is how far each needs to go and what both countries are willing to do to really make a dent in reducing global carbon emissions. That, of course, has been the central issue confronting negotiators at UN climate meetings for several years, and it’s the single biggest issue in Tianjin.

Very briefly, while both nations are investing considerable sums in clean energy development, China and the U.S. also are tightly hugging the existing fossil fuel economy as essential to national stability and well-being. The consequences of that are considerable for the environment and the rest of the world.

Soaring Energy Demand In China, Off The Chart Emissions
While U.S. energy demand and carbon emissions are slipping as a result of the Great Recession, China’s energy demand is soaring. By 2020 according to government projections, China will use 4.2 billion tons of coal – which accounts for 80 percent of its emissions.  And even if China meets its 40 to 45 percent reduction in “carbon intensity” by 2020,  an analysis by the Natural Resources Defense Council projects that China’s carbon emissions will essentially double by the end of the decade.

Tianjin climate negotiators, aware of the stakes and stymied by the pace, press ahead here to draw a bit closer to global agreements on financing for developing nations to pursue clean energy, conserving forests, reducing the effects of climate change, verification and transparency, and other issues. The annual global climate summit in Cancun, Mexico approaches at the end of November. The new UNFCCC Executive Secretary, Christiana Figueres, said yesterday there is a dire need to show the world’s citizens that the negotiations are making “visible progress.”

Essentially what she meant is that negotiators need to change the vector of a grim situation. She commended NGO groups for generating grassroots support, including 350.org, which is holding its Global Work Party on Saturday at thousands of sites in nearly 200 countries.

Indeed, there’s time, bushels of good ideas, and a tide of public will to act. The NRDC and Environment America calculated that reaching the 60 mile per gallon mileage standard in the U.S. by 2025 would save consumers $101 billion in 2030, cut oil use by roughly 1 billion barrels, and reduce heat-trapping carbon pollution by 470 million tons, the equivalent of taking nearly 70 million vehicles off the road.

And here in China, before the Tianjin climate meeting opened, leaders in the Guangzhou, the nation’s third largest city, said that they were spending $37 billion on 34 projects to reduce fuel consumption, increase energy efficiency, and lower climate emissions. The projects include advances in public transit, replacing low efficiency lighting with LED technology, and generating a sizable share of the city’s power with green energy sources.

One thought on “In Tianjin, China and the U.S. Look A Lot Alike”