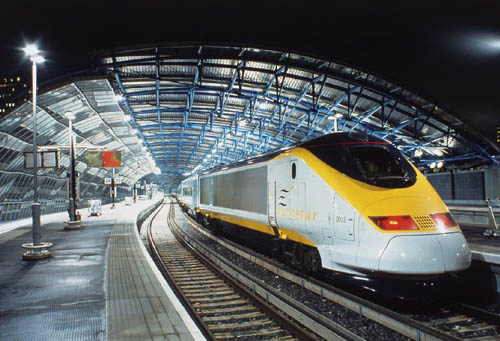 Since 1996, nine states in the American Midwest have been gradually inching forward on a proposal to establish a 3,000-mile high speed train network linking 100 of the region’s big and small cities. Chicago would serve as the hub of the The Midwest Regional Rail System. Spokes would include Detroit, Indianapolis, Minneapolis, St. Louis, Columbus, Des Moines, and many other large cities served by trains capable of traveling 110 mph, which would make the travel time and ticket prices downtown to downtown more competitive than on an airplane.  In 2004, a feasibility study found that purchasing the 63 train sets needed to operate the system would cost $1.1 billion, and upgrading the existing tracks to accomodate high speed rail would cost a little more than $2 million a mile or $6.6 billion. The expense of building the system would be 80 percent federal and 20 percent

In essence, for the same cost as building less than 120 miles of new Interstate freeway, the Midwest could design, construct, and operate a 21st Century passenger rail network that would make the region’s transportation system competitive with that of western Europe. Moreover, the feasibility study predicted that the system would generate so much passenger traffic, over 10 million riders a year, that annual revenue by 2014 ($528 million) would exceed the operating and maintenance expense ($453 million).

The Midwest Regional Rail System represents what is arguably the most economically, environmentally, technically, and culturally sound public investment under discussion in the nine–state region. But for more than a decade it’s been almost entirely just that, a discussion. No surprise. The barrier that prevents the idea from doing much more than creep forward is money. Neither the Federal Railroad Administration, nor any of the Midwest states have $700 million a year laying around for passenger rail in the Midwest. When it comes to big transportation investments, the region and the Federal government are still wedded to energy-wasting, environment-damaging, culturally dislocating highway construction.

Proponents of the regional high speed rail network, particularly the departments of transportaton in Ohio and Wisconsin, are not giving up. This month, the Wisconsin DOT published a reader-friendly economic analysis that takes into account the systems’ Mode Shift benefits. The study by the Frederick, Maryland-based Transportation Economics Management Systems found the system would reduce energy use and global climate change emissions, conserve land, and improve the ability of cities to design new communities and job centers around train stops. The system would generate 15,000 jobs a year during the decade of construction, and produce more than 57,000 related permanent jobs in the region, said the study’s authors. The high-speed network also would add $22.2 biilion in new economic activity. Almost $5 billion of that figure comes from transit-oriented development around stations.  In other words, the Midwest Regional Rail System could produce a convenient, efficient, job-producing passenger rail network that replaces the slower and less robust Amtrak system, and prepares the country’s heartland to speed out of the 20th century.

Judging from how Americans are flocking to trains, and developers are surrounding station stops with new transit-oriented housing and business construction, the Midwest is likely to be just as  eager to invite high speed rail into its midst. Texas is considering a high-speed rail system that would link San Antonio to Ft. Worth and Dallas, and Killeen and Temple to Houston.  Southern California is experiencing record ridership on its rail lines between Los Angeles and San Diego. The Boston to Washington corridor continues to attract ever larger numbers of riders.

Last month I was in Salt Lake City for the New York Times and found ample evidence of the market’s embrace of rail transportation and transit-focused development. More than $1 billion in new housing and retail development is planned or under construction around the Salt Lake Valle’s rail stops.  Salt Lake City and its closest suburbs in 1999 finished the $520 million, 19-mile, 23-station TRAX system, which carries more than 55,000 riders a day, well ahead of ridership projections. Voters have also repeatedly passed sales tax increases, including one approved last November, to spend $2.5 billion more in the next decade to complete 26 additional miles of light rail, 88 miles of heavy commuter rail line and nearly 40 extra station stops. The only American metropolitan area that is building more regional rapid transit capacity is Denver, which is constructing a 151-mile system.

Last year, Amtrak ridership reached a record 69,000 riders a day on 300 trains. The greatest growth rates occurred among the 23 short-distance routes where states contribute money to Amtrak and dictate routes. Of the 11 routes that saw the fastest increase in ridership, three were in the Midwest, including the Blue Water train that links Chicago to Michigan (10.9 percent increase), the Chicago to St. Louis train (8.3 percent) and the Hiawatha that ties Illinois to Wisconsin (10.5 percent).

Summed up: High speed passenger rail is a smart investment for this century. Every candidate running for statewide office, and every presidential candidate that campaigns in the delegate-rich Midwest ought to be asked their position on constructing a regional high speed rail network. The Midwest Regional Rail System, more than any highway, needs to be built.

Catching Up On Media

22 thoughts on “Build High Speed Rail in the Midwest”