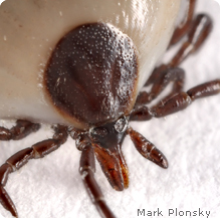 Just in time for April Fool’s Day, the National Wildlife Federation today released its analysis of shifting habitats of ticks and other migrating critters with a tongue in cheek title, “They Came from Climate Change.”

“The horrifying hordes of Climate Invaders are upon us–creeping up from lower elevations, attacking from foreign countries, and settling into areas where once they were unable to survive,” notes the marketing copy. The current vibe is irony and humor. The presentation does a nice job of capturing that spirit, and the text contains a lot of good facts about the problem.

Other good reads of note:

OIL VULNERABILITY- During unpredictable economic periods, America’s addiction to oil leaves us vulnerable. NRDC’s updated analysis identifies the states that were most whipsawed by o oil prices in 2009. It also explores a hypothetical scenario: What would happen if another price spike like the one in 2008 happened now, in the midst of a recession? The purpose of presenting this scenario is not to predict its likelihood of occurring, but rather to highlight the fact that oil price spikes happen. The data suggests that oil vulnerability affects all states, but that drivers in some states are hit harder y than others.

URBAN EMISSIONS- WWF released “Reinventing the City: Three Prerequisites for Greening Urban Infrastructures,” a report on urban CO2 emissions reduction strategies. With close to 80% of CO2 emissions generated in urban populations, how we develop and manage our urban infrastructures during the next three decades could determine whether cities become a force for environmental destruction or a primary source of ecological rejuvenation. The report identifies the necessity for cities to adopt aggressive energy reduction goals and the utilization of the latest technological advances to support and enable a green transition.

DIRTY KILOWATTS – The power plants that provide electricity to run our homes, businesses, and factories are also the single largest source of mercury air pollution in the United States, responsible for more than 40 percent mercury emissions nationwide. The Environmental Integrity Project has ranked the top fifty power plant polluters for mercury. Pollution controls that dramatically reduce mercury emissions are widely available, and are already being used at many power plants. But, until the public and policymakers hold the electric power industry to its promises to shut down or clean up the nation’s oldest and dirtiest plants, Americans will continue to bear unnecessary health and environmental costs.

WINNERS AND LOSERS- “Who’s Winning the Clean Energy Race?” The new report from PEW documents the dawning of the new worldwide industry of clean energy. Accounting for more than 90 percent of worldwide finance and investment, G-20 countries dominate the clean energy landscape. The Unites States is on the verge of losing its leadership position in installed renewable energy capacity, with China surging in the last several years to a virtual tie.

The U.S. policy framework for reducing global warming pollution and promoting renewable energy remains uncertain, with comprehensive legislation slowly working its way through Congress. On the other hand, America’s entrepreneurial traditions and strengths in innovation—especially its leadership in venture capital investing—are considerable, giving it the potential to recoup leadership and market share in the future.
– Keith Schneider

2 thoughts on “Spreading Ticks and Other Climate-Related Actions”