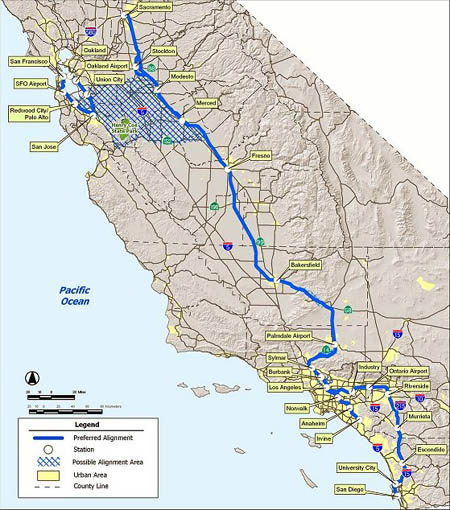 California Democrats have elevated building their state’s proposed high speed rail network to the top of their legislative priorities, according to the San Francisco Bay Guardian. The Daily Kos, one of the most read blogs in the country, noted the swirl of attention that Governor Arnold Schwarzenegger stirred with his proposal to cut $2.5 million in state funding to the California High Speed Rail Authority, the agency overseeing the system’s planning. And the Los Angeles Times yesterday published an editorial yesterday that called on Republican Governor Arnold Schwarzenegger to back off his proposal to reduce state funding this year to the California High Speed Rail Authortity, the agency overseeing the system’s planning.

“By 2020, the projected completion date for the bullet train, gas will likely be a lot more expensive,” said the Times. “State and federal governments by that time should be well underway in cutting back sharply on greenhouse gas emissions, probably translated into increased costs for flying or driving. (The bullet train would be emissions-free.) Train service, particularly the kind that could compete with airline travel on convenience, could be far more economically competitive than it is now.”

The push back comes because Californians recognize the value of a reasoned alternative, not only to meet their own transportation needs, but also in responding to the triple whammy of peak oil, global climate change, and explosive growth in the number of people and vehicles expected in the state over the next generation. Nor is California alone. Trainblog, a fine compendium of rail news and notes, included this piece from the Billings Gazette in Montana noting growing support for a high speed rail line, the Ranger Xpress, that would link Rocky Mountain cities. The Republican lawmakers of Wyoming temporarily put down their guns and resistance to abortion and taxes to fund preliminary studies. “The Wyoming Legislature passed a supplementary budget request for $300,000 to help fund a study of the possibility of a Rocky Mountain High Speed Rail Corridor,” the newspaper reporter, “which would stretch from Casper, Wyo., to Belen, N.M. The cities of Casper and Cheyenne each gave $50,000.”

Governor Schwarzeneggers’s move on the California high speed system also coincides with the powerful evidence of rail’s utility in a sound transportation strategy. The San Francisco rapid transit system, BART, is experiencing a surge in ridership in response to the gasoline-fed inferno last week that melted a ramp to the San Francisco-Oakland Bay Bridge, the primary east-west entrance and exit to San Francisco. The San Francisco Chronicle reported this week that  “BART carried a record 375,200 riders on Tuesday, up from an average weekday of 340,000 riders. BART’s ridership fell back a bit Wednesday morning, with 7,300 more riders than average, for a total of about 140,000 riders who boarded from the start of service to 11 a.m. During roughly the same period on Tuesday — the start of service until noon — 158,000 people boarded BART — an extra 13,000 riders, 9 percent more than usual.” 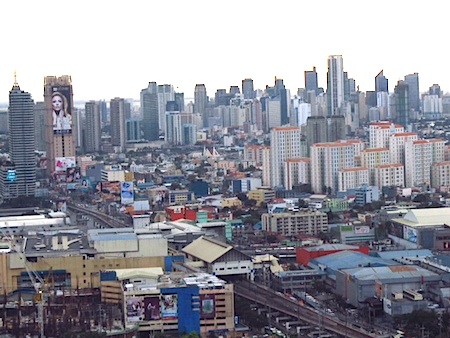