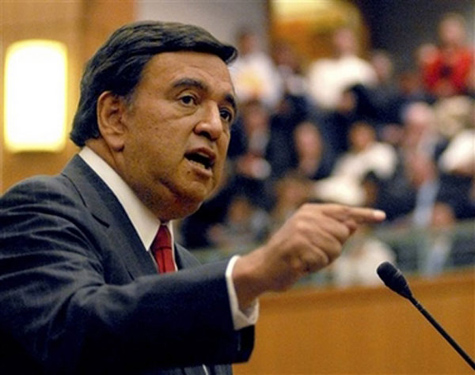 On October 4 Democratic presidential candidate Bill Richardson, who also happens to be the governor of New Mexico, essentially committed a personal political drowning here in the Great Lakes region. Mr. Richardson, who is campaigning hard to win the Nevada’s presidential caucus on January 9, the nation’s second such contest, told the Las Vegas Sun the following:

“I want a national water policy,” he is quoted as telling the newspaper. “We need a dialogue between states to deal with issues like water conservation, water reuse technology, water delivery and water production. States like Wisconsin are awash in water.”

The thirsty desert Southwest, which has suffered through a years-long drought, may be one of the fastest growing regions in the nation, and most profligate users of fresh water, but when it comes to voting numbers, especially electoral college voting numbers, it is quite literally a political drop in the bucket compared to the Great Lakes region. And the voters of the Great Lakes states aren’t about to easily turn over management of the world’s largest source of clean freshwater to either the water-wasting cities of the Southwest or to the ideological and donor-driven legislators who run the national government.

Here in the Great Lakes states we understand the value of freshwater in a world where one-third of the population does not have access to enough water to comfotably live, and where so much water is being polluted, drained, and mismanaged that two-thirds of the world’s population could suffer the same fate by 2025, according to a recent United Nations report.

So Governor Richardson may have made some political friends, and courted some votes in Nevada and the Southwest with his remarks. But his ability to court support in the Great Lakes region, and win the White House, just ended. The evidence of that statement is told in the numbers.

A presidential candidate must marshal 270 of the 538 electoral votes to win. The total 2006 population of Utah, Nevada, New Mexico, Arizona, and Colorado was 17.4 million, and the number of electoral votes for that region was 34. The total population of the eight Great Lakes states — Illinois, Indiana, Michigan, Minnesota, New York, Ohio, Pennsylvania, and Wisconsin — is 83 million, or 28 percent of all Americans.  And though it’s experienced grave difficulty making the transition from the 20th to the 21st century, five of the 10 largest states are in the Great Lakes region. That is why these eight states collectively retain 141 electoral votes, or more than half of the votes needed to win the White House.

Wisconsin may be, as Mr. Richardson asserts, awash in water. But when he comes courting votes there and in the other Great Lakes states, he’ll find his wellspring of support bone dry.

8 thoughts on “What Was Bill Richardson Thinking?”