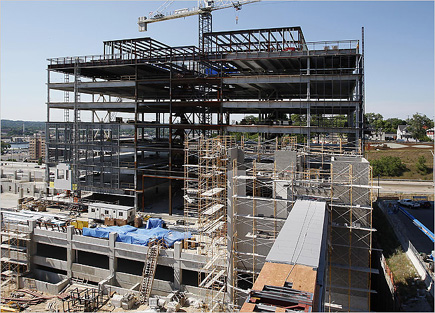 There still isn’t much to be happy about when it comes to the political conversation in Lansing, our state capital. Though she won more than 50 counties in the 2006 election, more than any Democrat running for any state office in Michigan history — she also delivered a Democratic-led  House;  Republicans hold the state Senate by a slim majority — Michigan’s governor hasn’t done anything with her influence.

Politics is a full contact body sport.  Ms. Granholm, though, has spent more than four years convinced that politics is a courteous waltz. And the more she dances, the further Michigan slips. In an era defined by educational achievement, Michigan drains resources from its public  schools and universities, yet battles to retain the same number of incarcerated state prisoners at more than $30,000 each a year. In an age when more miles of rapid transit determines regional and state economic health, Michigan is doing nothing — repeat nothing — to help the Detroit region actually use the $100 million set aside by Congress to build a starter heavy commuter rail line between Detroit and Ann Arbor. And in a century when clean, renewable energy is the order of the day, Michigan state government and the governor’s office appears more than pleased to foster the development of two new power plants that use 19th century technology and an 18th century fuel source — coal.

It is for these reasons and more that at least one of the state’s prosperouos regions — Grand Rapids — has largely decided to avoid state government officials and political leaders to advance new economic development strategies that are producing jobs, higher incomes, an enhanced quality of life, and real prospects for its citizens in this century.

I spent the day in Grand Rapids last week and every time I go I find something new and impressive. This time I discovered a medical and biological research construction boom had overtaken Health Hill on the city’s north end. From the summit of the hill, and stretching roughly half a mile in both directions along Michigan Street, a stunning array of buildings is under construction, reflecting a commitment of nearly $1 billion by the area’s prominent families and medical institutions. There are a new medical school, a children’s hospital, a biomedical research center, a cancer treatment center, and two medical treatment and office buildings. All told the buildings will cover 1.2 million square feet.

By 2010, when construction is completed, those buildings, several designed by world-renowned architects, will provide enough space to treat thousands of people a day and employ 5,000 people, 2,500 more jobs than exist now on Health Hill. Grand Rapids may be executing the largest biomedical and patient care construction project in the United States at the moment. I could find only two other projects of near the same magnitude — one at the University of Kentucky in Lexington, which is building a $450 million hospital that is part of a 20-year $2.5 billion medical campus construction program, and a $160 million building that was just finished by the Oregon Health and Sciences University in Portland, the first of three big buildings it plans to construct in the city’s new South Waterfront section.

In essence, Grand Rapids has developed its next big new strategic economic thought around biological research and medicine, focusing on patient care and cancer research. A city that was founded on cutting down trees, later developed furniture, evolved into manufacturing, has found a way to shed its rust belt image by developing new means to treat the sick and prevent disease. My colleague at the Michigan Land Use Institute, Andy Guy, has written about Grand Rapids’ ascent more expertly than any journalist in Michigan.

A last thought. Grand Rapids accomplished this feat by joining the vast wealth of its industrial families, many of them ideological conservatives, with the progressive ideas of its city government, neighborhood organizations, non-profit civic groups, and academic institutions. Partisanship wasn’t an issue. Neither was ideology. Collaboration in a collaborative century was the watch word. Big ideas were hatched and are being achieved.

Grand Rapids is little more than an hour’s drive to Lansing. You wonder why the smart people there are having such a hard time with this.

4 thoughts on “While Lansing Sputters and Fumes, Grand Rapids Excels”