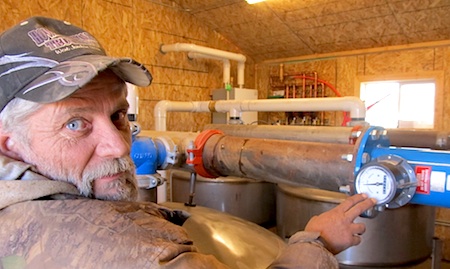 WILLISTON, N.D. — A pad of ice four inches thick greeted Ron Ivory on a clear and cold December morning at the busy water depot south of town. Ivory is 47 years old, a stocky and bearded truck driver from Vernal, Utah, with 23 years in the business. He’s been in North Dakota two weeks, working 14 hour days and earning $25 an hour hauling fresh water, 130 barrels a load, to oil production sites.

One of the reasons that North Dakota and the other big U.S. shale energy fields have generated so many new jobs is because extracting  gas and oil from solid rock two miles deep is as close as man has gotten to really drawing blood from a stone.

It takes a lot of water, millions of gallons per well, to perform the operation known as hydraulic fracturing, or “fracking.” The typical well receives 300 to 400 tanker loads of heated fresh water that is mixed with sand, solvents, and other chemicals and then pumped down 10,000-foot well bores at pressures eclipsing 7,000 pounds per square inch. Coupled with explosives and other evolving production practices, the water cannon-shot pulverizes the shale, opening spaces in the rock through which oil and gas flows. 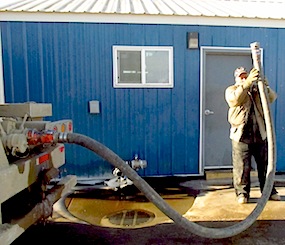 Thirty-five fracking crews work day and night in North Dakota now, and there are likely to be 45 next year. Some 100 to 150 jobs are connected to a frack crew, according to the state Oil and Gas Commission. Some of those jobs involve operating the powerful fracking pumps. The rest are connected with transporting water from pumping stations, known as depots in North Dakota.  There are dozens of depots scattered across the territory and the roads of western North Dakota are jammed with thousands of water tanker trucks.

“Everybody is up here to make money,” said Ivory (see pix above), adding that he anticipated that his next paycheck would have a 4 followed by three zeros. “That’s the game here.”

In a series of ModeShift posts this week I’ve described the accelerating pace and mammoth dimensions of the nation’s oil and gas boom, and steadily closed in on a firm answer to this question: How much influence has it exerted on the American economy?

Today, with the help of a new analysis prepared for ModeShift by Economic Modeling Specialists, Inc., an 11-year-old labor market research firm based in Moscow, Idaho, we’ve reached a clear conclusion.

Since 2005, the oil and gas boom has been one of the most important sources of new jobs in the United States.

In addition, “production of oil and gas requires all sorts of inputs, from pipe, pumps and transport equipment to engineering, business, and legal services.  At each step, wages, taxes, and property incomes are generated and the associated spending creates multiplier effects,” said Henry Robison, the firm’s chief economist.  “Using traditional economic modeling techniques, EMSI estimates that for every oil and gas sector job, another 2 jobs are generated in support and other affected industries through multiplier effects.”

One other point. EMSI found that the roughly 600,000 new oil and gas sector jobs generate an annual payroll of nearly $38 billion.

“Combine this with significant property incomes, taxes and royalty payments and one gets a picture of an industry growing not only in employment terms but also in terms of its effects on the nation’s gross domestic product, and its local, state, and federal government revenues.”

“It’s certainly stunning and noteworthy,” Robison concluded. “I don’t think the public is aware of this. You hear about the windmills and solar power initiatives. But this is striking.” 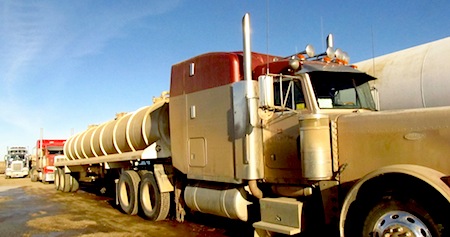 Memo to Hu and Obama: Water and Energy Choke Points Merit Time at the China-U.S. Summit

New American Energy Boom, A Reprieve and a Reckoning