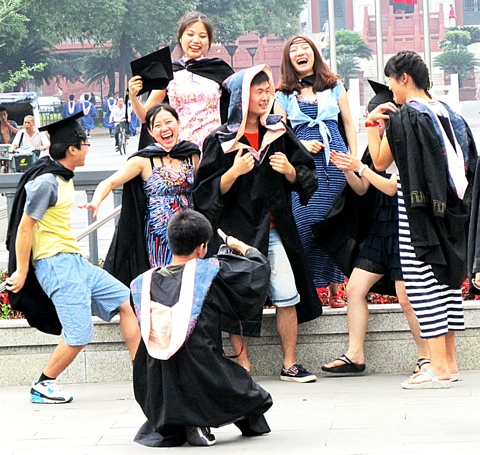 CHENGDU, China — Sichuan University, one of China’s best, held its graduation today. The campus, which is green and shady and is woven into this giant city’s central business district, much the way NYU’s campus is sewed into lower Manhattan, was abuzz with young energy.

Not far away, the Fuann River (see pix below) flows through the city, contained in an engineered channel bordered on each side by river-length walkways, parks, and shade trees. At night, the city’s many tall and modern office buildings are lit with LED colors that cascade and swirl, defining the edges of some buildings in thin reds and blues, and bursting upon others in electric purple and yellow and orange.

Thousands of people stroll the riverside walks. The parks are full of dancers, women line dancing to Chinese rock, part of their daily exercise. The young men moonwalking to Chinese and American rap.

One of the irrefutable personal measures of a great city is how well it treats runners. I pack running shoes and shorts on my trips and exercise almost daily with a good run. In the United States, New York, Chicago, San Francisco, Boston, Washington, Portland, and Seattle rank high by this measure. All have incorporated trails and parks and safe running routes into their recreational infrastructure and quality of life.

China’s big cities don’t generally measure up as running meccas. The air is usually terrible. The traffic is heavy and dangerous. On the other hand, there’s always interesting stuff going on to keep your mind busy. And drivers are so aggressive that it’s really easy to get hit if you’re not vigilant. Beijing is big and traffic-choked and its linear parks are either too distant or crowded to run in. Running on the streets of Harbin and Shenfang in northeast China was similar. Parks were few and busy streets kept my mind alert. Tianjin also was dusty and paved to excess.

Still, there are three cities that meet the Keith index for a good city run. Qingdao, a coastal city, is beautiful and has a 40-km walking/biking trail that skirts the rocky Pacific shoreline. A riverfront walkway lines both sides of the Huangpu River in Shanghai’s Bund business district.

And the third is here in Chengdu, where parks are more numerous, the Fuann River walk is first rate, and the shaded campus of Sichuan University a treat to run through. Near downtown is the Quanzhi Lanes (see pix below) a neighborhood of narrow pedestrian-only streets full of good restaurants and interesting shops.

This my second visit in a year to Chengdu. It’s pretty clear to me that this orderly, impressive, and prosperous city will soon join Beijing, Shanghai, and Hong Kong as a must-see destination for travelers to China. 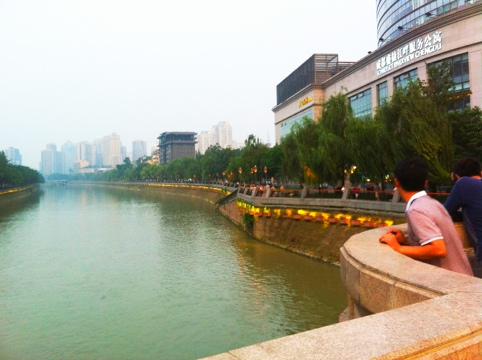 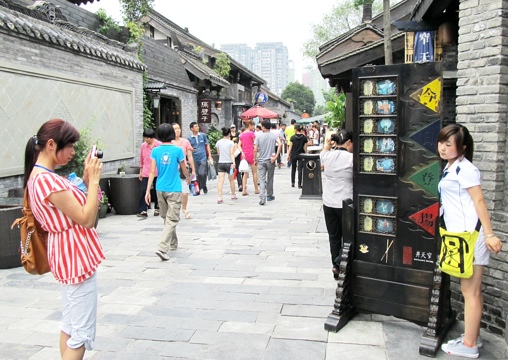 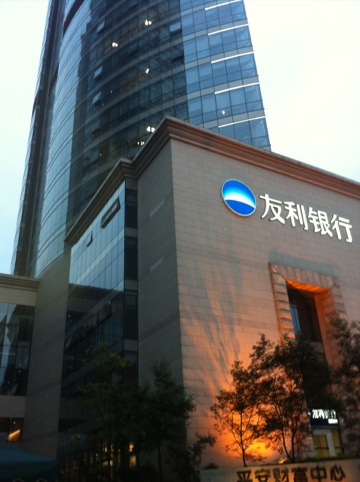 One thought on “Chengdu’s Modern Beauty — Bustling, Not Bursting”