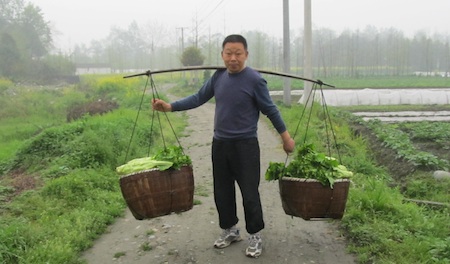 CHENGDU, China — Just as with food safety trends in the United States, one antidote to the growing incidence of serious contamination events in China is to raise more food without farm chemicals using organic production practices.  On Tuesday this week I visited the Anlong Organic Farm about 40 miles west of Chengdu, in Sichuan Province, and one of China’s growing number of organic farms.

The farm is six years old, and owned and managed by nine families, several of whom migrated to this region of southwest China in the early 1960s. They collaborate to produce a wide assortment of green vegetables at this time of year, and later a number of varieties of fruit, few of which I recognized. 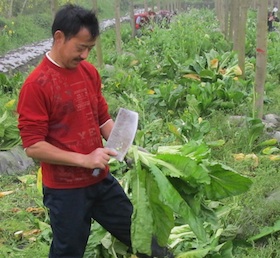 My party, which included Carl Ganter, the director of Circle of Blue, and Peter Marsters of the China Environment Forum at the Woodrow Wilson Center, watched six people harvest woshen, a leafy green with a thick stalk, that was neatly stacked like logs in the bed of a three-wheel motorized cart. They stood in a field no larger than the average American front lawn, patiently holding the heavy green in one hand and removing thick leaves from the stalk with a knife in the other. They finish by slicing the ragged leafy end to create a straight and neat cut.

The carefully choreographed harvest, five workers slicing woshen while a sixth hoisted full baskets and walked them out to the waiting cart, was a clear contrast to what’s occurring in China’s industrialized food sector. This month, Chinese authorities arrested two farmers in northern Gansu Province in the nation’s northwest region for deliberately poisoning milk with nitrite. The police, who closed two dairies, have not publicly disclosed a motive for the farmers’ crime, which killed three children and hospitalized 36 people.

Food safety scandals have become a regular part of the national news here since 2008 when six children died and 300,000 people were injured by milk powder poisoned by melamine, a dangerous and outlawed food additive. Other contamination events include pork products that contained clenbuterol, a growth hormone, and food produced with recycled cooking oil that contained toxic contaminants.

The agriculture sector also is among China’s major water polluters. Industrial farm practices that include ample use of growth-promoting fertilizers, weed killing herbicides, and insect-preventing organo-chlorine pesticides add to farmers’ expenses and result in runoff that pollutes the nation’s rivers and lakes.

There is no runoff from the Anlong farm. Farmers here told us the farm earns 15 cents for every stalk of woshen sold at the smaller regional markets, or twice the price for conventionally grown woshen. When they sell to the limited organic market in Chengdu, a city of 10 million residents, they earn 90 cents for each stalk. There were 1,400 woshen piled in the three-wheel cart by the time the harvest finished, a haul worth about $210.

While not wealthy, the organic farmers of Anlong told us that each family can earn as much as $1,500 a month producing and marketing chemical-free produce. In addition they operate a bed and breakfast and serve meals to the growing number of Chinese tourists who’ve heard about the enterprise and stop by to take a look.

We ate the farm’s delicious organic lunch and met Zhang Yifei, a former journalist who’s started a new NGO in Shanghai, Green Citizens, that’s considering building a local foods program. I suggested he call Patty Cantrell, a friend and colleague who recently left the Michigan Land Use Institute, where she established one of the country’s top local foods programs, to start her own consultancy, Regional Food Solutions. A little organic matchmaking 9,000 miles from home. 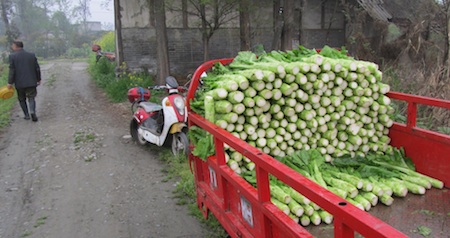