Those of you who read Wendell Berry, the great Kentucky poet, novelist, and essayist, know that when stripped to its essence, Berry’s singular contribution to the national idea is this: America works best when its people are connected to their places. Successful communities and a durable nation, Berry argues, depend on people who love and safeguard the land. The other side of this Jeffersonian thought, one that Berry writes about with eloquence and depth, is that rootlessness has undermined America’s social and economic edifice.

What’s intriguing as I travel the country is the resurgence of allegiance that Americans express for their place. I’m not pollyannish about this. Crime, family discord, joblessness, political division, and the sense of unease that ex 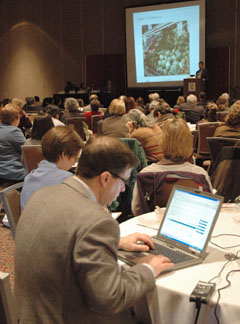 ists in the country provide plenty of evidence that we are not yet close to solving our many ills. Still, there is an unmistakable surge of fealty that many Americans exhibit for where they live.

Expressions of community loyalty are easy to find, and never more so than last week during the run up to the Super Bowl. Steve Rubel’s fine Micro Persuasion, which covers social media trends, drew my attention to this picture of Chicago from Flickr.  Here is an example of how a blog and social media Web site focus on a civic message expressed beautifully across one of the world’s distinctive skylines. Chicago, by the way, has come way back from the delapidated condition that existed in the 1970s and 1980s. The city embraced a three-point economic development strategy that stresses environmental sensitivity, energy efficiency, natural resource conservation, and park investment, and you’ll be reading much more about that here.

More evidence of the convergence of social media and place is the development of “place blogging,” a great example of which is A VC, based in New York. Place bloggers are taking up the space left vacant by the often vapid and blood-focused urban and regional broadcast newsrooms, who try to describe their places in 3-minute takes. Depth and knowledge, as local TV news watchers know, are not virtues in local television news. Print newsies also ought to be aware, too. Place bloggers are challenging conventional dailies and weeklies in covering trends, economic developments, housing, and cultural events. Like other forms of media produced by consumers, place bloggers are defining the new intellectual geography of reader and viewer interest, and in some cases are breaking news and starting to make a living at it.

The point is that an old American value is developing new momentum, a trend reflected in the generation of fresh voices in social media.

Reporting on Change in America