In Lansing today to cover the events and presentations during the day long Seeds of Prosperity Conference. Among all of the states, there is arguably none experiencing a greater economic struggle than Michigan. Measured in standard indicators of economic performance — joblessness, number of young adults departing the state, home foreclosures, and rates of childhood poverty  — Michigan ranks at the 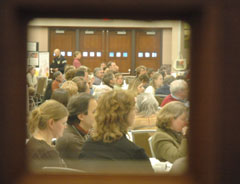 top or near the top. Personal income has fallen 5 percent below the national average, the first time that’s occurred since the Depression. And in the measures that Michigan once led the nation — income growth, new business starts, average wage increases — the state is heading towards Mississippi instead of California.

One of the unexpectedly strong economic sectors in Michigan, though, is agriculture. Really. Michigan’s more than 55,000 farms produced more than 200 commodities that generated $4.5 billion in revenue at the farm gate last year. The Michigan Department of Agriculture estimates that agriculture’s overall contribution to Michigan’s economy—through products, processing, marketing, distribution, and other activities—is $60 billion annually and accounts for one million jobs.

But Michigan doesn’t pay nearly enough attention to its food and farming industry. Our second-term governor, Democrat Jennifer M. Granholm, promoted a Select Michigan program early in her first term. That produced heightened sales of Michigan-grown fresh fruit and vegetables. Lately, she’s talked a lot about alternative energy, especially ethanol production, which could produce a boon for corn and grain producers. It could conserve farmland, a good, but also add to erosion and other environmental harms, a bad. Most importantly, the loopy thermodynamics of ethanol production are enough to make any thinking person scratch their head. A gallon of ethanol produces just about the same amount of energy as it takes to grow, ship, and process the corn needed to yield a gallon which produces the same amount of energy….

Instead, Michigan needs to look much harder at the places in the farm and food community where there is real excitement. And those sectors have converged around Entrepreneurial Agriculture, which is the great name for a movement developed by my colleague Patty Cantrell to describe the growers, marketers, shippers, manufacturers, processors, and markets that make it easier for good food grown in Michigan to actually reach its residents. Goodness knows, this state knows how to eat. Look around and that’s more than apparent. Michigan has the highest rate of obesity in the nation, and among the highest rates of heart disease and diabetes.

Yet next to California, we also have the second highest number of home grown commodities in the country. It’s a magnificent feast produced on good Michigan ground by hardworking Michigan residents. The point of this conference is to elevate to public attention the people and projects that are putting more of that good healthy food on Michigan’s table.